I’ll start with the nitpicks just to get them out of the way.

That said, there’s a lot to love about this concept. Let’s start with the grandstand, since that’s where most everyone will be sitting. 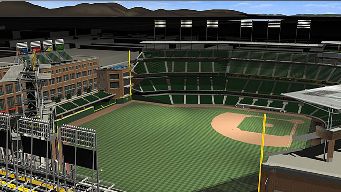 It appears like four decks, but it’s more like two large decks. Take a good look at this cross-section, taken from the animations page:

This will be, by far, the most intimate new ballpark in baseball. The upper deck cantilever is really aggressive. It’s even better than I could have hoped for, better than I’ve drawn up. The yellow/red model is Cisco Field, while the white model is… SBC Park in all likelihood. All of the decks are closer and lower than their SBC or McAfee counterparts. Techies (like me) better be on the lookout, because if they’re busy staring down at a smart phone, they’re liable to get a screaming liner right in the grill.

The upper deck is actually split in two. The lower section has 13 rows, while the upper section has 7. That makes the combination one row deeper than the Coliseum’s upper deck. Why are they separated? Three reasons:

The leftfield bleachers rise above a small street and connect to a building across the street. Now that’s integration. I hope the risers are made of steel or aluminum so that they can get really noisy. It wouldn’t be hard to bring the “A” or triangle shape used in last year’s model.
The full street concourse is an evolution of what’s been done in Baltimore and San Diego. Rightfield looks a lot like Eutaw Street, and the centerfield park is a lot more cohesive than the park-within-the-park area at Petco. The double-sided video board isn’t new, but its sheer size will make it compelling. It wouldn’t be a bad idea to show all road games on the exterior board. And once a week during the summer, the board would be a natural place to have outdoor movies and concerts. One of the neat things about Petco is that they have a $5 Park Pass admission, which acts as a cover charge of sorts that allows for standing room admissions. Since the street and park would be part of the ballpark when during games, it’s conceivable that several thousand of these Park Passes could be sold without violating fire code. It’s a cheap ticket to get in, a bump in revenue, and a way to bring fans into all of those restaurants in the ballpark village. Yes, standing room sometimes sucks, but…