The Merc’s Lisa Fernandez got some clarity from Lew Wolff today.

Wolff is troubled about the length of time it’s taking to satisfy major property owners near the proposed 32,000-seat Cisco Field and to complete an environmental review.

“I still think it’s going to happen,” Wolff, a major South Bay developer, said today from his office in Los Angeles. “Otherwise I wouldn’t be doing this.”

Still on the EIR. Okay…

Fremont Mayor Bob Wasserman said Wolff asked him at Tuesday’s A’s game to talk to nearby property owners ProLogis and Pacific Commons to appease them about various concerns. Wasserman wasn’t clear on the details. But he thought the obstacles concerned ownership of some land and parking. Pacific Commons operates a large retail shopping center next to the proposed A’s ballpark site.

Three of the larger Pacific Commons retailers have expressed concerns with the A’s parking plan, team co-owner Keith Wolff said. Although the retailers can’t block the project, the team wants to make sure they’re satisfied. They want clarification and mitigation, Wolff said. One possible solution, he added, is a pedestrian bridge over Auto Mall Parkway that would link the ballpark to the largest parking lot.

The first big retailers are an easy guess: Costco and Lowe’s. The third is probably Kohl’s. They are the closest big box stores to the village site and have vast parking lots that could be easily poached by stadium goers (*cough* Coliseum BART *cough*) if an effective parking plan were not implemented. 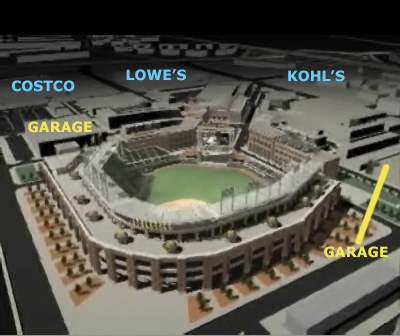 ProLogis, the owners of the Pacific Commons site (and sellers of the village site) have been trying to broker a deal that protects the stores’ parking during games and other events. Apparently, these talks haven’t been going that well. A big box store’s business model is heavily dependent on free, abundant, adjacent parking. That allows shoppers to stay in the stores for lengthy periods without worrying about inconveniences such as validation or time limits. IKEA, for instance, has taken this to the extreme by purchasing their own sites and in many cases, building parking garages.

If you’re a big box store, your stance is simple: Don’t make me have to change anything. That probably rules out validation. Time limits probably couldn’t be imposed because they have to be enforced, which costs money. Either solution may be a deterrent to shoppers, and that won’t wash with the retailers. You’re also not likely to run into a situation in which ballpark goers combine a game with a trip to Costco on gamedays. It’s simply incompatible.

On the other hand, there are plenty of smaller businesses, such as area restaurants, that are positively interested in their proximity to the ballpark. The big box retailers, however, have the big sway. They are major sales tax providers to the city, and as such deserve to be accommodated.

What would be the best way to allay the retailers’ fears? The A’s may have to consider not charging for parking at all. The way the parking plan is coming together, the non-preferred lots are further away from the ballpark than the big box stores. If the A’s force fans to pay to walk a greater distance, it will invite parking poachers to Pacific Commons. There still may be poachers because of those lots’ proximity, but at least there won’t be a monetary reason to do it. This would hurt the A’s because they wouldn’t be able to rake in some $12-16 million in annual parking revenues. That loss could be offset somewhat by a potentially larger number of visitors to the area. Of course, that policy could be a double-edged sword. If the place becomes too popular (Valley Fair/Santana Row), patrons could – that’s right – poach Pacific Commons parking if the village parking isn’t plentiful enough. That’s not a likely scenario since ballpark parking at other times could serve as overflow, but you never know. Even implementing completely free parking requires patrons to be on the honor system to prevent poaching. Free parking would also not go over so well with environmentalists, as they might see it as tacit approval of driving over transit. 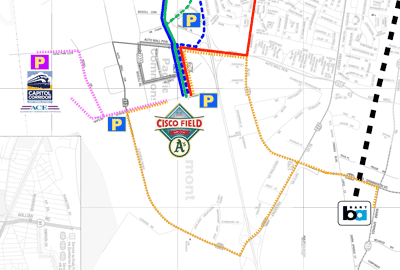 Moreover, the fact is that some of the ballpark parking is somewhat remote and will create pedestrian traffic. That’s an intended effect, as the A’s want people milling around the area before and after the game. However, there is one major intersection in the area that, if not planned properly, will cause ingress/egress delays due to massive amounts of pedestrian traffic going through there. I wrote about this last year:

Second, since Joe Fan won’t get to park that close to the park, he may be forced to use the lot across Auto Mall from Pacific Commons (the uppermost “P” above). It would behoove the A’s to build a pedestrian overpass over Auto Mall Parkway. A full lot there would equate to over 5,000 fans walking from the lot. Not putting in an overpass would be borderline irresponsible, as Auto Mall Parkway is 9 lanes wide in this area and only one side has a usable crosswalk. The best thing to do would be to build the overpass and stick some flexible electronic signage on it. The signage can direct traffic on event days. It can also show advertising on other days/hours.

Is this deal complex? You bet it is.