This short video was shot yesterday afternoon between Jack London Square and Howard Terminal. There’s no better illustration of the impact of trains through the area. They are the lifeblood of the port’s operations and an important conduit for commuters on Capitol Corridor. Should a ballpark be planned for Howard Terminal, multiple pedestrian bridges will have to be built to span The Embarcadero in order to ensure fan safety. However, that’s not the only issue.

The sign above is your typical underground pipeline warning sign. Many pipelines are found alongside railroad tracks since both are meant to go long distances. In this case, the pipeline has a much more local purpose – the Oakland Power Plant. 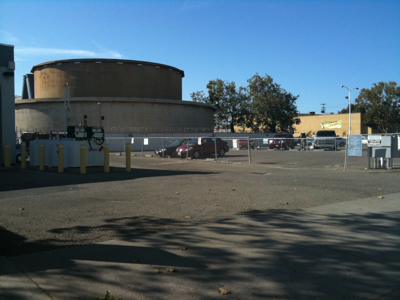 The tank in the upper left of this picture doesn’t hold water. It holds oil for the plant. Nasty, potentially flammable stuff. The plant itself is not operational 24/7, it’s meant to provide peak-demand power when needed. Oakland Power Plant spans 3 blocks and is owned by Houston-based Dynegy, along with the plant in Moss Landing.

The CA Public Utilities Commission and the Port of Oakland have occasionally gotten into skirmishes about the plant. There’s no denying the importance of a piece of power infrastructure like this, but the Port has resisted attempts by past owners to expand the plant. An audit performed two years ago (warning: PDF) by the CPUC revealed instances of lax training and emergency preparedness, though nothing was deemed dangerous within the scope of the plant’s operation.

I’ve been told that with Matson’s long-term deal with the Port, it’s nearly impossible to relocate them. The City has been mum on a specific site in the area, but given the circumstances it may be better to focus on other land nearby. Which is too bad, imagine the building below as part of a majestic concrete/masonry ballpark façade. (It’s part of the power plant.)

So where to focus? The best place may be the area north of Howard Terminal and the power plant, bounded by the BART tracks/5th Ave on the north, MLK to the east, 2nd St to the south, and Market/Brush Sts to the west.

No, it’s not on the waterfront. It does have a nice view of Downtown Oakland. It’s also a shorter distance to the 12th St BART station, just over 1/2 mile as opposed to 3/4 mile from the station to Howard Terminal. Admittedly, it would be strange to have BART running right past the place even though there wouldn’t necessarily be a co-located station. Fortunately, there is some vacant land that would be perfect for station portals if all parties could get it together. Just as important, it’s a shorter stumble to-and-from The Trappist.

Most importantly, land deals would be done with individual private landowners, not the Port. Port land is really City land, but that doesn’t make it any easier to do a deal given the politics involved. We’re talking about 5-6 blocks, the same amount as Diridon South.

Is this doable? I have no idea. I’m just as in-the-dark about actual proposals emanating from Oakland as many of you.