by Marine Layer
The future at the Coliseum boils down to this. 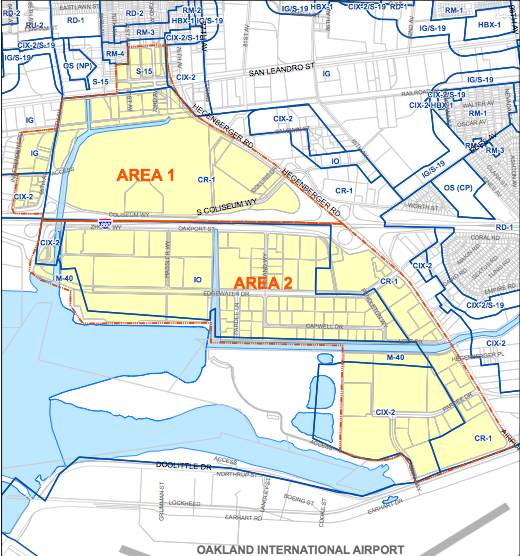 I’ve been reading the meat of the Oakland Coliseum Area Specific Plans RFP. It has some clearly outlined goals:

During Friday’s press conference, Oakland Mayor Jean Quan revealed that six firms have submitted proposals based on the RFP. It wasn’t immediately clear if the bids were based on both areas (Coliseum City, Oakland Airport Business Park) or just one. Either way I’m interested in seeing what will happen. As I’ve written previously, the process is going to take some time to complete. This is not an environmental impact report. That, and EIRs for specific items if they are deemed large enough to require such studies, would come later. The scope is large, as it should be if it’s covering 750 acres. It includes an advisory that any consultants should plan for 25 project meetings with city staff, 8 community workshops, and 12 public meetings with the Planning Commission and City Council.

The interesting about the RFP is not that in the list of alternatives, it asks for one in which the A’s leave the Coliseum complex. In light of recent news about the Warriors being lured to SF and the possibility that the Raiders may join the 49ers in Santa Clara, what’s surprising is that there is no alternative that considers what would happen if all three tenant teams leave. At this admittedly early juncture, it seems a lot more likely that there will be only one or two teams left at the Coliseum in ten years than all three. It may be more likely that no teams will remain as opposed to the three.

In the City’s efforts to appease the Raiders, they’ve left huge openings for the Warriors and A’s to exploit if they wanted to leave. The Warriors have it good. The region is crazy for pro basketball as a product. The bar is astonishingly low for perceived success. Joe Lacob and Peter Guber (and Bob Piccinini, ahem) know that the Warrior fanbase will follow the team across the bay without batting an eyelash, and if some group of pro-Oakland fans chose to protest, they’d be easily replaced by fans in the West Bay. We’ve been chronicling the A’s efforts to stay and leave for over 6 1/2 years here, so I don’t need to rehash all of that. As for the Raiders, consider this: it was the NFL, not the 49ers, that put together much of the $850 million of financing for the Santa Clara stadium, including Goldman Sachs. Does anyone honestly think that the NFL and Goldman Sachs would do that if they weren’t going to lean heavily on the Raiders to play in Santa Clara, at least for a decade? The agreement drawn up with the City of Santa Clara supposedly has the team and the NFL on the hook for debt service, so it’s reasonable to think the Raiders will be nudged south. The NFL doesn’t give out it “G-3” loans to just anyone. It doesn’t want to do it twice in the Bay Area if it can help it, especially if another $150 million is in play for a stadium in either LA or San Diego.

A proactive, instead of reactive, government would at least explore the possibility of no teams at the Coliseum just to suss out the potential of the area post-pro sports. Pride and the lingering debt on the stadium and arena are pushing the City in a different direction that may not be very realistic. The challenges for Oakland in developing the Coliseum area are many:

Let’s be clear about something. It makes sense for the City of Oakland to think about the future. They shouldn’t think with tunnel vision. The RFP mentions baseball twice, and specifically figures the Raiders in as part of the future. The City needs to work on all possibilities, not just the Raiders or a pie-in-the-sky Coliseum City development. No matter how Mayor Quan tries to spin the process in Oakland as “easy”, figuring out what to do the Coliseum 10, 20 years down the road is anything but. The plan needs to be comprehensive. As the process starts in earnest over the next year, I hope that Oakland residents start asking the tough questions. They deserve real answers. They’ll have their chance in the workshops and hearings.