After yesterday’s game, I headed up to Howard Terminal yet again to snoop around and take a few more pictures. I also read up on SSA Terminals/SSA Marine’s lawsuit against the Port of Oakland. This post will contain an analysis of both.

First, let’s start off a bird’s eye view of the site, with a few items labeled for further discussion.

From right to left you see:

Now I’ll explain why the overpasses (green lines) will be needed. A couple of pictures for comparison:

View East from The Embarcadero and Clay toward Jack London Square 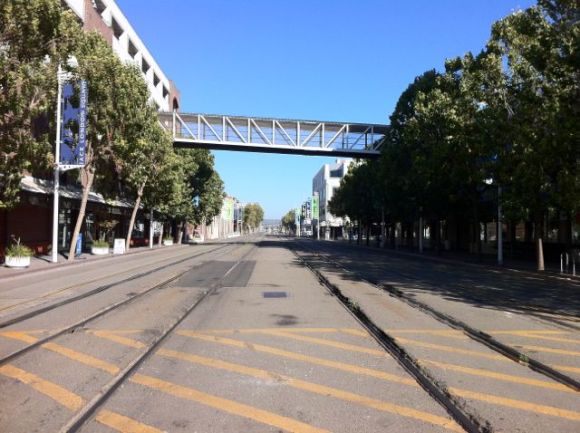 View East from The Embarcadero and Clay toward Jack London Square 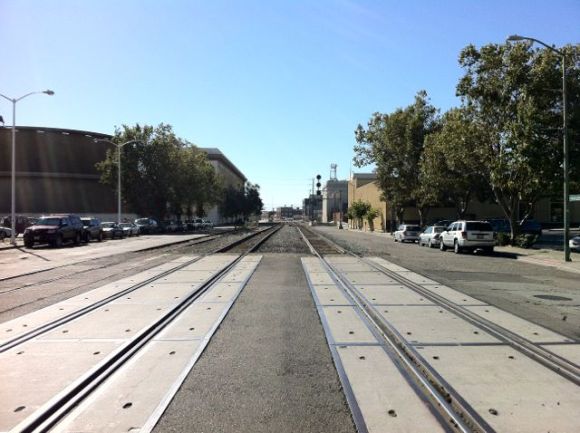 View west from The Embarcadero and Clay towards Howard Terminal

These tracks cannot be moved. They are a big part of what makes the port truly intermodal. If 40,000 people are going to cross these tracks and The Embarcadero to get to a Howard Terminal ballpark, it is paramount that safe methods for getting those people across are implemented. Gates and traffic cops aren’t going to stop stupid, drunken fans from playing chicken with an Amtrak or freight train. Unlike the light rail trains run by SF Muni outside AT&T Park, these trains don’t stop quickly even if they’re traveling fairly slowly.

The second picture also shows that there is little streetscape west of Jack London Square. The westbound car lane ends in another block at Jefferson, and the track area isn’t paved. It would make the most sense to completely shut down The Embarcardero near Howard Terminal to all traffic other than trains for a 6-8 hour window on game days.

How then, do you get people across The Embarcadero? It’s for all intents and purposes a moat. By building bridges, of course! The scale and number of bridges would be driven by the amount of parking that is made available adjacent to the ballpark. And that is largely driven by the amount of parking available in and around Jack London Square. Over 3,000 spaces in lots and garages are present, plus at least 500 on-street parking spots. However, only 1,250 spaces are within 1/3 mile of either HT ballpark site. Extend the radius to 2/3 mile, which is sort of the fringe distance that people are willing to walk, and you get 7,000.

Comparison of parking near ballpark sites

Additional parking may be made available under the BART alignment or on street, but it’s clear that parking near Howard Terminal is a clear site deficiency. The obvious place for a new facility is next to the ballpark. 16 acres would yield 2,000 spaces, which should serve the dual purposes of filling the needs of the ballpark and satisfying current JLS tenants (restaurants, Yoshi’s, movie theater) that have depended on the existing infrastructure. For that much parking, whether it’s all surface or new garages, two entrances would be required, or rather, two overpasses. That’s why I drew the two overpass paths. Market Street is the main entrance to Howard Terminal and is already set up to handle heavy traffic with four lanes. MLK Way is also four lanes. The overpasses would also create two additional pedestrian overcrossings, netting four total along The Embarcadero.

The price for the overpasses? Around $10 million each. Add that to the promenade expansion, parking construction, and other site improvements to make Howard Terminal hospitable for a ballpark.

Before we get ahead of ourselves, it’s important to note that no ballpark at Howard Terminal will be possible without SSA Marine/SSA Terminal vacating the premises. And while Matson (partnered with SSA) provided support to Don Knauss in his efforts to either build a ballpark on the waterfront or buy the A’s (or both), it doesn’t appear that Howard Terminal operator SSA will be easy to move. While SSA’s container business is down in Oakland, the company is not blaming the downturn on the way Howard Terminal is configured. Instead, SSA has a problem with its lease at Berths 57-59, just over a mile west of Howard Terminal (Berths 67-68). SSA is suing the Port of Oakland over alleged violations of the federal Shipping Act. SSA alleges that the Port is giving preferential treatment to Ports America, a competing terminal operator at the Outer Harbor, Berths 20-26. SSA’s claim is that Ports America (PAOHT) is leasing its site for 45% less per acre than SSA, while not having to contribute much to infrastructure improvements. Due to the more expensive lease, SSA is saying that it’s losing business to lower-cost competitors like PAOHT to the tune of $46 million per year.

Renegotiating SSA’s lease to make it on par with PAOHT could negatively affect port revenue $10 million annually (offset somewhat by new lease terms), and while the two sides have talked they haven’t sat down to negotiate. The lawsuit will be three years old in December. SSA is being coy about what they want out of this besides a lease. The ballpark gives them a very convenient trump card that it wouldn’t otherwise have, now that we know that Howard Terminal is the only site in Oakland that MLB is investigating. It’s a very tough spot for the Port and City to be in. If the City doesn’t get the Port to renegotiate the lease along SSA’s terms, Howard Terminal is dead before it begins. It can’t kick SSA off the property as the lease goes until 2017, with two possible 5-year extensions that SSA will probably decline. Plus any changes to Howard Terminal like the ones I described previously have to work for the other tenants of the Port like PAOHT and other shippers, making the Port every bit as beholden to its tenants as it is to the City (from which the Port operates independently anyway). And if you want to make things even more complicated, the City of Oakland wants out of a bad bond hedge deal with Goldman Sachs. Who’s a major investor in Carrix, the parent company of SSA? Goldman Sachs.

Cost estimation is difficult, but back-of-the-napkin math has infrastructure at $50 million depending on site and foundation, and an ongoing loss of $10 million in fees to the Port with a redone lease and relocation costs. From the looks of things, SSA might play ball if they get their lease redone. If not, what’s their incentive? This reminds me a lot of what the City of San Jose did with AT&T on a rezoning deal near Valley Fair. Considered a quid pro quo deal, we may never know if it really is one unless a ballpark in San Jose is built. SSA appears to be in line for a similar enriching.