Six years ago I went to the first game at the new Stanford Stadium. Yesterday I went to the first game at the renovated California Memorial Stadium on the UC Berkeley campus, eager to compare and contrast the experiences. Both home teams lost their respective first home games. Both stadia received major upgrades in terms of amenities and comfort. That’s where the similarities end. Stanford Stadium is a modern facility that bears little resemblance to its forebear. Memorial Stadium was painstakingly renovated to maintain as much of its early 20th Century charm as possible. It’s with that key difference that I’ll start my review of CMS.

Panorama from top of South End of California Memorial Stadium

Like many stadia built 80-100 years ago, CMS was a testament to classical form and simplified function. Slightly less than half of the oval seating bowl was built atop a hill on the east side. The other half was a concrete structure with arches and a single narrow concourse. All of the seats were wooden bleachers. A small press box was affixed at the top of the west side of the bowl. At one time 80,000 could be packed sardine-style into CMS.

Over the years CMS deteriorated noticeably, with huge cracks in the concrete and bleachers splintering everywhere. The stadium was situated directly on top of the Hayward fault line and the west half was not considered safe by modern seismic standards. Many calls were made to replace or refurbish the old girl, with nothing happening until the UC Board of Regents approved a $300+ million plan to rebuild the west side. The new half would contain three club areas, a new and wider general concourse, a large press box, and a training center for the athletic department that would be competitive with other major college sports programs. 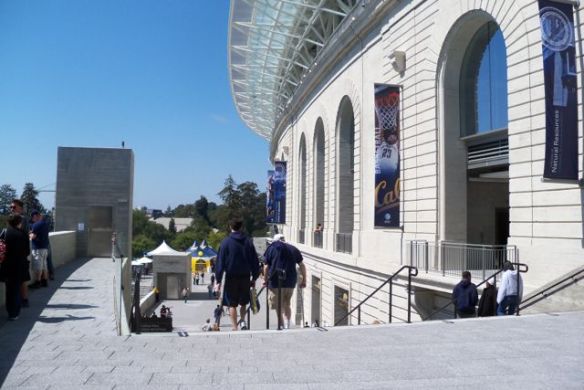 The debate over whether the upgrades were worth it will continue for years to come, as Berkeley continues its internal struggle over academic priorities and costs to attend keep rising. What the fan is left with is a sense of history and legacy preserved, with modernity accentuating itself in specific areas.

The three level press box and club building is the big nod to the new landscape of college football, where everything is driven by intense media coverage and alumni with fat wallets. The building is a glass-and-steel structure, its frame forged and delivered in pieces and put together on top of the new concrete support structure that holds up the rest of the west bowl. There’s even a space beneath the press level where the camera positions are located that makes the building appear to float. Chicago’s Soldier Field renovation may come to mind, but the work done at CMS isn’t nearly as imposing or potentially upsetting.

What was once a single, dark concourse with water seemingly dripping from every crack and opening is now two: the swank lower club level (which I didn’t visit) and the regular concourse, which now lines up with the elevation at Gate 6. The result is that large areas were opened up, allowing natural light coming through the arches to flood the concourse. It also creates numerous scenic vistas of other parts of the campus and the Bay. As the morning fog receded, I was able to see all the way to San Francisco and the Golden Gate Bridge.

The main concourse is 30-45 feet wide depending on where you are. Concession stands alternate with much improved restrooms everywhere you look. Blue tiles of different shades mark the restroom locations, while the concession stands are adorned with names like “Oski’s Place” and “The Fault Line”. Oski is, of course, the beloved bear mascot at Cal, whereas “The Fault Line” playfully notes that it’s located right on the Hayward fault.

Walking through the concourse, it’s hard not to notice the many expansion joints dividing roughly 100-foot sections of the stadium. These joints and piston shocks will help absorb motion in the event of a major earthquake, with as much of six feet of travel allowed. Flexible conduits are located in areas with expansion joints, which should reduce the chances of data or electrical disruption. Concrete columns are spaced every 20 feet, giving an appearance that the structure is overbuilt. 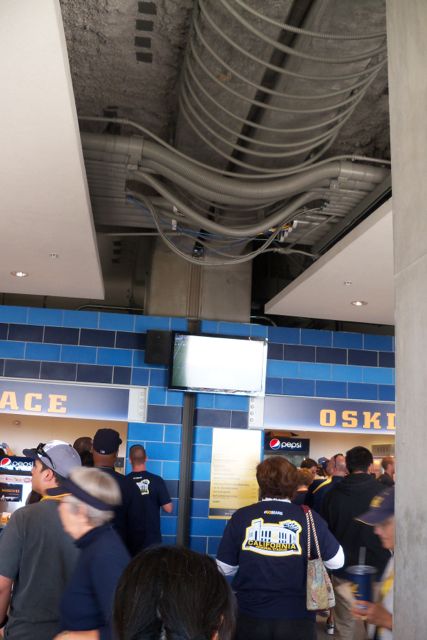 Lines for food were long towards the north and south ends of the stadium. Between the 20 yard lines the lines aren’t so bad. Crowds will figure that out by the end of the season. The fare was pretty standard, with a regular hot dog and a Saag’s polish on the menu. Prices were cheaper than at pro games, but noticeably more than at other college venues I’ve been to. Top Dog has three stands on the East upper rim, and those had 20 minute lines from the looks of it. The club most certainly has pricier options.

The only obvious change to the east bowl was the replacement gold aluminum bleachers, matching the rest of the stadium. Padded seat cushions with backs were available for rent. Down near the field where I sat, four rows were ripped out and replaced with ADA-compliant wheelchair locations. The old south tunnel is now just access to two ADA restrooms, from which security had a hard time shooing confused fans. The new Field Turf playing surface was also lowered four feet, which helps sight lines immensely. Way up above the field, Tightwad Hill is still there, with its spectators almost close enough to touch.

On the north side the tunnel remains intact, allowing for a pre-game procession through the campus into the stadium. A ceremonial ribbon-cutting ceremony was held, with Walter Haas III doing the honors in memory of his father, the much-loved former CEO of Levi Strauss, one-time owner of the A’s, and philanthropist whose name is emblazoned on Cal’s arena, a staircase at CMS, and the business school (which faces the north entrance Gates 1 & 2). 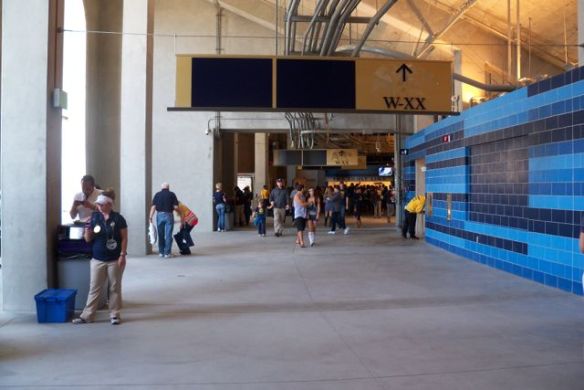 Just about all of the flat areas of the Berkeley campus are packed with academic buildings, athletic facilities and other structures, making open space rather scarce. There was some question going into the planning and construction phases for CMS about whether or not there would be places for fans to mingle or even tailgate before games. Some effort has been made in this vein by creating plazas outside the arched façade with tents for additional concessions or grills. It’s not quite the same as tailgating, yet these are spaces that can find a purpose in the future.

All told, Cal and HNTB did a wonderful job of holding true to the idea of maintaining California Memorial Stadium’s architectural and structural integrity. There’s no telling if Cal will be a good football team anytime soon. Nevertheless, Memorial Stadium is a beautiful place to watch a game and a reminder of how stadia don’t have to be overly utilitarian. It’s worth a visit.