One of the Coliseum City deliverables due in February was a public infrastructure costs report. That report is now available (report/cost tables) thanks to BANG’s Matthew Artz. Sometime ago I half-joked that the amount of infrastructure needed to build out Coliseum City is so much that it would be like adding a fourth venue in terms of cost. It’s no joke anymore, as the numbers are in. Infrastructure cost, which for some reason doesn’t even include the cost to demolish the old Coliseum, ranges from $344 million to $425 million.

Unlike the previous phasing report, which had the Raiders stadium being built for 2018 and the Athletics by 2022 or later, this report has both venues being constructed and opening in time for their 2018 seasons. Much of that total includes relocation of utilities that run through the complex, including nearly $16 million to move overhead power lines and $1.4 million to move the sewer interceptor.

Surprisingly there is no estimate for the cost of demolishing the old Coliseum. The report states that demolition of the Coliseum “will only marginally affect the costs of the new facility.” For large concrete structures like the stadium, that could easily run into the low eight figures, especially because of how massive Mount Davis is. If that’s considered marginal, it’s only because it’s about 3-5% of the total project cost.

The price escalates quickly when accounting for all the stuff that would make the City part of Coliseum City work. About $24 million would go into BART station improvements. The big addition is a side platform that would allow fans to more directly access the BART bridge without having to go down into the station, only to go up again. That would be a welcome improvement regardless of how much of Coliseum City gets built, since the station can be a huge bottleneck during high-attendance games. There are also initial plans for a streetcar, which at $25 million seems awfully low considering that it would eventually go across the Nimitz and out to Edgewater. $175 million covers all transit, traffic, and infrastructure changes, with another $45 million going towards optional enhancements. $21 million of that total would go towards a new loop road (boulevard) that would serve Coliseum City. 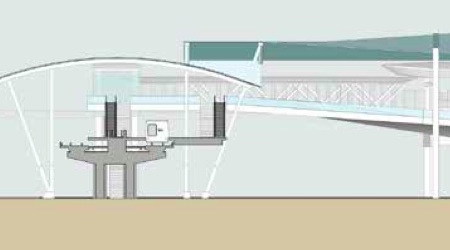 New side platform and access to BART pedestrian bridge

Another $20 million is estimated for a parking garage for the NFL stadium. Such a garage seems antithetical to Mark Davis’s fan experience with tailgating as a major feature, so I’m curious to see if he would balk at that piece. At the very end of the reports table is an estimate for NFL stadium only infrastructure, nearly $55 million. Naturally, Davis and the NFL might look at that figure with more interest than the total for the whole development. It’s also worth pointing out that a stadium built on top of the current Coliseum footprint would be even cheaper from an infrastructure standpoint, since it would probably require no utility relocation.

The estimates provided aren’t indicators that the project will proceed. The project could be transformed again or scaled down depending on team or developer interest. The City and Alameda County will seek out TOD grants for much of the transit hub improvements package. It’s also likely that the JPA will look to create an infrastructure financing district (IFD) to fund the rest of infrastructure. If they can pool together enough funding through grants and future assessments to make it all pencil out, Coliseum City has a chance. Nevertheless, these costs have added some $400 million to the various venue construction costs. All told we’re talking about $2.5 billion and counting.

Towards the end of the report was Phase I of the Market Data Analysis, which was also expected in February. The findings go against previous studies that showed weak demand for premium seating. There seems to be an effort to show that a larger stadium with the capacity of the 49ers’ Levi’s Stadium or the Vikings’ new dome in Minneapolis will be worth the escalated cost. The study also indicates that the ticket-buying fan base is far more geographically widespread than merely the East Bay, with many coming from the Central Valley, Reno, Las Vegas, and even Phoenix.

It’ll be interesting to see if the Raiders and Davis concur with these survey findings. Davis has been leading the charge for a smaller stadium with 56,000 seats instead of 68,000 that BayIG is pursuing. Obviously, BayIG wants the bigger stadium for a future Super Bowl, an event that wouldn’t be possible in a smaller stadium. BayIG is emboldened enough to want to pursue the development further. Does Davis like what he sees? Only three weeks ago Davis expressed frustration about not getting information from BayIG or the JPA. Did he receive this report after the comments he made during the NFL owners meetings, or before? If BayIG and Davis can’t get on the same page, there is no Coliseum City.