I didn’t attend tonight’s Sounders-Earthquakes game at Levi’s Stadium, so I can’t comment on any aspects of the experience there. I won’t get into the architecture either, even though I have seen the stadium in every stage of construction multiple times per week over the last two years. I’ll reserve those thoughts for after August 29, the date of the Friday Night Lights high school football event. That event will not only be the cheapest to get into at the stadium ($20 general admission, less than a tour ticket), it will feature a doubleheader, meaning fans can roam around the venue for six hours if they wanted to. That’s exactly what I’m going to do. Anyway, I’ll let this tweet sum up the experience inside for now:

The big mystery leading up to the game was whether or not the venue and the City of Santa Clara could handle the influx of fans. Tonight’s game was positioned as a sort of soft open, with a crowd no larger than 50,000 expected. The upper deck was closed off to cap the capacity. If the open house for season ticket holders was a dry run, Saturday night was to be the first real test. Despite advisories to come more than 2 hours early, many fans faced gridlock on the surface streets leading to the stadium. Fans who arrived in the area 60-90 minutes before the match start were often turned away as their designated parking lots filled up. As part of the TPMP (Transporation and Parking Management Plan), the lots were roughly divided into quadrants based on which direction/highway you were coming from. Arriving from the east on 237/880? The red lots are for you. From the south/southeast on 101/87? Try the green or purple lots. As Tasman Drive and Great America Parkway backed up, those going to the more remote lots eventually had an easier time getting and out. Sure, that meant an extra 15-20 minute walk, but it was probably worth it. It sure beat some fans being stuck for an hour in the parking garage across the street from the stadium. Parking inventory isn’t going to improve over the next couple of weeks, so it will be absolutely paramount for the team/City to more efficiently route fans along those surface streets. Even so, it highlights a problem with the street grid in north Santa Clara – there are no side streets. Everything’s set up in a superblock fashion, and the commercial “neighborhoods” within have no outlets besides the heavily impacted major intersections that service them. I’m sure that the TPMP will be revised to improve this performance, but there’s no fixing the street layout. That said, Great America Parkway has four lanes north and south. It should be capable of getting cars in and out of the stadium vicinity. My advice?

For some people, getting out was worse than getting in. For others it was the exact opposite. The above tweet is half-joking, but parking closer to either 101 or 237 can’t be a bad idea if you want to get in and out quickly.

Transit was another story. Caltrain and VTA have been pitching the idea of transferring people coming from SF/Peninsula at the Mountain View station, then trekking the 25 minutes on light rail to Levi’s Stadium. The circuitous route (with a small section of single track) is far from efficient. VTA wants to boost light rail ridership, so this seems like a good way to do it. It’s not the fastest way to get fans to the stadium. If they want to get fans to the stadium fast, they’d have fans disembark at the Lawrence station 3.5 miles southwest of the stadium. From there express buses would be lined up to take fans 15 minutes the rest of the way. Riders arriving via the main spine of the light rail system (from Downtown, East & South San Jose, plus Campbell/Los Gatos) had to deal with overstuffed trains and mechanical breakdowns. One train shut down at the River Oaks station and its air conditioning system went out, motivating many riders to pop out emergency windows to get fresh air. 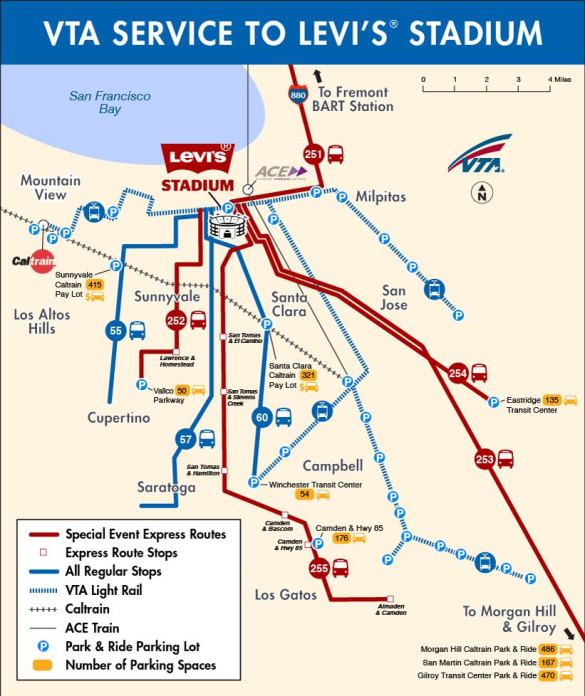 VTA is working on an additional track siding to store more trains, which should improve capacity. That’s still not enough. A 3-car trainset holds around 500 people including standees. That should improve service frequency from the every 10 minutes service VTA was advertising but not delivering. However the problem is infrastructure. There needs to be an alternative in place to better facilitate all of the fans overflowing at the Great America Station platform. Some fans told me that they walked to other LRT stations to avoid the crowds. The agency should follow a practice it already follows when there are breakdowns or other high-impact delays: employ bus bridges. By providing an overflow option for light rail riders, VTA can ensure that more fans can make the regular or special northbound Caltrain trains. Set up bus bridges to Mountain View, Great Mall, Alum Rock, Tamien, Winchester, and Ohlone-Chynoweth. That should relieve pressure on the light rail system and allow fans going to Downtown San Jose to utilize freed up trains. Otherwise you get stories like the one from Merc sports editor Bud Geracie, who lined up for light rail once the game ended before 10 and didn’t arrive at the Tamien station until nearly midnight.

My advice to fans? If VTA doesn’t introduce redundancy, take Caltrain to Lawrence (from SF/Peninsula or San Jose) and Uber/Lyft/Sidecar/Taxi the rest of the way. Fair should be around $20 or less each way, quite reasonable if you’re in a group.

Coincidentally, there was one aspect of VTA that was working well: the express buses. The five routes, which served Cupertino, Eastridge, Gilroy, Los Gatos, and the Fremont BART station, got in and out swiftly. Fans on those buses didn’t face the overcrowding experienced on light rail. They got to the BART station as early as 10:30. Another alternative I heard a lot about was bicycle. Whether biking straight to the stadium (if based nearby) or transferring from Caltrain, the trip proved fast and trouble-free. Bike racks at the stadium were packed, indicating that some fans had been planning those routes for weeks if not months.

Capitol Corridor was running on a normal weekend schedule. Fans who rode Capitol Corridor had to leave the game early to catch a 9:30 northbound (eastbound) train, the last one of the night. For 1 PM Sunday 49er games, the schedule has been changed slightly to better accommodate fans leaving Levi’s around 4:30-5. ACE, which doesn’t normally run on weekends, will have a special train running in each direction on Sundays.

The first 49ers preseason game is scheduled two Sundays from now. That game is expected to be a sellout plus standing room. Santa Clara and the Niners have a lot of work to do to reduce the frustration and confusion experienced with this first event. I’m pulling for them, but it’s gonna be tough.