The Jake is 20 this year, and Indians ownership has decided it’s in need of a refresh. While the ballpark was certainly a premier venue during its first decade of operation, the times have changed and the novelty has worn off. Repeating the team’s 455-game sellout streak is unlikely as the Jake is too large for today’s MLB. And there are aspects of the look and feel of the place that are very 90’s. The Indians felt it was time for a wardrobe change, if you will. 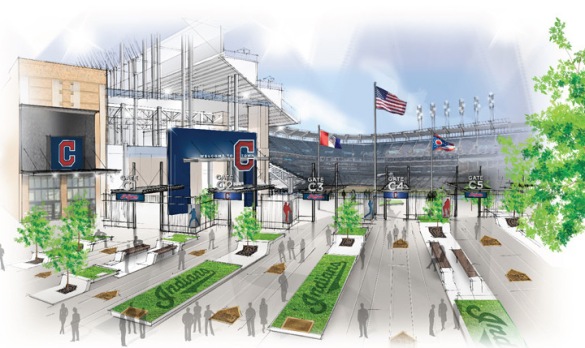 Much of the effort will be focused on the outfield, where seating and circulation will be reconfigured. Gate C in center field will be opened up. Currently the gate is a fairly nondescript plaza with some young trees and little signage. Views into and out of the ballpark were obstructed. To remedy this a food court and bar in center will be removed. This is a well conceived transformation, as it’s this gate that many fans parking downtown will use (those arriving via the light rail system use Gate A in left field).

The other major change, which can be seen at the top of the sketch above, is the modified upper deck in right field. The Rockies removed seats in their similar RF sections and transformed them into huge rooftop decks at Coors Field. However, unlike in Cleveland where the seating bowl will apparently remain intact, in Denver actual concrete risers were removed. The result at the Jake will be patios that will only face the field. Perhaps the Indians are doing this to preserve seating capacity for the future. Whatever the reason, it’s not as interesting as the 360-degree treatment at Coors.

Bullpens will be reconfigured from their “slit” design to terraced next to the batter’s eye. The concourses will undergo their own freshening, with bright colors everywhere in the form of paint and vinyl. A kids play area will be expanded. Current capacity is 43,000. As a result of the RF changes, capacity will drop to 37-38,000. The changes should at least attract fans who haven’t been to the yard in a while, though in Cleveland, only winning will keep bringing them back. I’m glad I got a chance to visit before the Jake undergoes this facelift.