This post is not strictly related to the Coliseum City EIR, though the ideas within are somewhat germane.

It’s been a few months since the Warriors gave up their effort to build at Piers 30-32 in San Francisco, electing instead to buy land at Mission Rock to the south. So far, the team has received practically zero resistance from the parties that either opposed the waterfront arena or who would typically oppose such projects. From a regulatory standpoint, the arena should go as easily than Pac Bell Park went, perhaps easier since it’s technically not on the waterfront. While it’s too early to call the arena a slam dunk, it’s a good idea for Oakland and Alameda County to start thinking about what will happen to Oracle Arena after the W’s leave.

First, the JPA and the W’s will surely go to court over the $61 million in debt owed on the arena after 2017. Once that’s settled, a series of choices will need to be made. One possibility is to demolish the arena and reclaim the land, about 8 acres worth. Should the arena stay put, more choices will have to be made about what its purpose is and how to best utilize it. 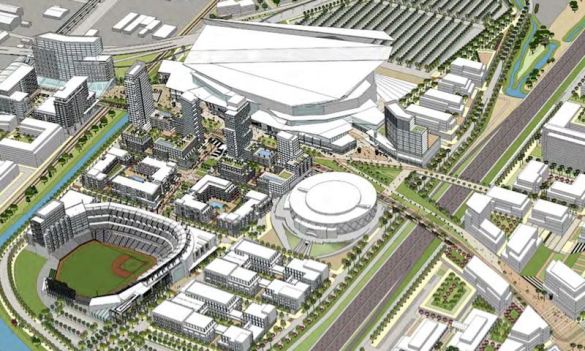 The market for a third 17,000+ capacity arena lacking an anchor tenant in the Bay Area is not good. The SF arena will be the new must-see, must-book venue in the Bay Area, with arenas in both Oakland and San Jose suffering to some degree. If the arena debt falls back on Oakland/Alameda County, operating costs can run as much as $17 million a year through 2027. With the arena in a prime site within the Coliseum City development, the temptation will be huge for O/AC to cut their losses and recoup whatever they can through redevelopment. Countering that will be pressure from the community and preservationists to keep the arena intact, as it retains significant historical value.

Functionally, the arena is still an excellent venue. Steady improvements have been made since the 1997 renovation, including new club areas and seating options, new scoreboards, and revamped technology inside the building. The biggest problem remains poor circulation, as the main concourse is narrow and cramped. While well appointed, the sideline club areas also have a tendency to feel congested. It also has way too many seats for anything other than a NBA or NHL franchise and should be downsized.

My first suggestion then, is to remove the upper seating bowl. The lower bowl has 10,000 seats on its own, plus another 1,000-2,000 available on the floor depending on configuration. That’s the perfect size for the sort of second-tier arena that every major market should have. For decades, that venue has been the Cow Palace, but the old joint is so antiquated and generally undesirable as an arena that acts avoid it like the plague. Besides the Grand National Rodeo and the usual touring circus, very little happens at the Cow Palace. Therefore it would appear that there is an opening in the market for a 10k arena. It’s the right size for the WNBA and minor league hockey. Most touring concert acts aren’t looking for 15k seats or more, 7-12k may be plenty sufficient. That venue doesn’t really exist in the Bay Area. SAP Center and the forthcoming SF arena will be able to reach that with curtaining or other tricks. The reconfigured Oakland arena should be able to hit that without any visual tricks.

You’re probably saying at this point, Okay but what about the upper deck? Glad you asked. The picture above illustrates how beautiful the arena used to be, with its sense of symmetry and different types of geometry. It also shows the amount of available vertical space. That largely went away with the renovation, but would be available again after the upper deck is lopped off. I’ll put out a couple different ways to utilize the space.

One way is to put a new ceiling on the arena at the rim of the upper suite level. That would require putting in an extensive truss system to support the ceiling/roof and whatever is on top. Once that’s done, the upper level can be finished, leaving a 10,000-seat arena below and an exhibit space above. That exhibit hall could have a much as 100,000 square feet of clear span, column free space. That’s nearly twice as much as the downtown Oakland Convention Center, and more than Moscone West’s main hall. The drooping ceiling would create a weird visual effect for many (most similar buildings have an arched or flat ceiling). Beyond that, the new exhibit hall would fill a need not met by anything currently in the East Bay. The best part is that the arena could be run completely separately below or in conjunction with the exhibit hall, providing additional hospitality and exhibit space, the arena itself largely unchanged. Some new infrastructure would have to be built, such as a large freight elevator and ramps to the revamped upper level.

Another option is more conventional. In this case the seating bowl would be torn down but the upper concourse would be expanded to the perimeter of the building. There would be no second ceiling above the arena bowl. Available square footage would be cut down to 60,000 or less. Uses would be fairly limited, such as commercial (office) or even retail. If there ever was a natural spot for a movie theater multiplex, this is it. 15-20 screens could easily fit in the space, even an IMAX theater. Again, there’s a need that’s unfulfilled in Oakland right now, and Coliseum City would be well positioned to capture that market with its expected higher-income residents, office workers, and visitors. Cost would be fairly minimal for the JPA, as the theater operator would presumably bear the cost of constructing the auditoriums.

The name “Oracle Arena” is expected to expire after 2016, when the naming rights deal ends and the Warriors have construction underway. When that happens the name will probably change back to the Oakland Coliseum Arena, the venue’s original name. That’s fitting, whether the arena continues as is or is transformed in some manner. The building may not have seen much winning in its 40+ years, but it’s full of great memories and events. If there’s a way to keep it operating that works for the public, it should be explored to its fullest.

25 thoughts on “Reusing an abandoned arena”