These days, there’s no such thing as a comprehensive stadium tour, at least not for Joe Public. Inevitably, some important feature is missed or glossed over. Most every stadium tour visits the luxury areas (clubs, suites) to show the public where their money went and to sell the occasional business owner on the merits of a package. Visits to a locker room/clubhouse and the press box are requisites. If the stadium has grass, you’ll get to see it. You won’t be able to step on it. Some operators allow fans to step on an artificial turf field, some don’t. If there’s a museum or historical monument, some time is usually spent there. The 49ers didn’t stray far from the formula at Levi’s Stadium, and in doing so the tour I took there felt like it came up a bit short.

The team provides two versions of the tour, a $35 ticket that includes a 49ers museum entry, and a $25 version sans museum. I took the latter. If you’re not aware, I’m not a 49ers fan, so while I have an appreciation for their history, I don’t feel the need to spend an extra $10 to see it. Besides, I already visited the Pro Football Hall of Fame earlier in the summer. I’m good with the history stuff for now.

Tickets for the tour and other events can be bought at the main box office along Tasman Drive near the Toyota Gate F (northeast end). A small valet parking lot is provided there, otherwise you can park near the golf course across the street or on non-event days, the main lot to the west. The Tasman Drive side also has the entrance to Michael Mina’s Bourbon Steak restaurant at Gate B. Move west towards Intel Gate A you’ll see doors to the museum and Comcast Sportsnet’s in-house studio. All the while you’ll be shaded by the bulk of the stadium, its huge angled steel columns reaching skyward and touching down close the street. The whole package takes up about 17 acres between the 49ers’ preexisting headquarters and San Tomas Aquino Creek, which was left undisturbed during construction. A set of 3 new pedestrian bridges link the stadium to the main lot.

Having worked in the tech industry for 15 years, I instantly recognized the tour guide’s initial talk as a sort of startup pitch, and I wasn’t surprised by that in the least. He made sure to use “technology” and “fan experience” several times in his spiel, emphasizing the excellence within. It makes sense, especially if the team is trying to get fans to spend money to buy such an experience instead of hanging out at home in front of their flatscreen TVs and with their much cheaper (and often better) junk food items.

Instead of walking around the bowl, we took an escalator up to the Yahoo! Fantasy Football Lounge, an attempt to corral fans who need to get their extra juice by watching “their own” players on Sunday. It’s a good setup, with unassigned, get-there-early seats along the windows. Flatscreens are assembled into a seamless ribbon board to display stats per player and position. FFL has its own concession stands. If you’re a fantasy junkie it might be your kind of setup.

We weren’t able to visit the multi-level United Club as a private function was already underway there. Strangely, we didn’t visit any suites either. I suppose that’s just as well, since they’re all sold out for 10+ years. Usually there’s a community or city suite to visit. Then again, when you’ve visited as many stadia as I have, suites stop looking impressive and start looking like the same nice hotel hospitality suite with a view after a while.

The Club and Lounge are on different levels of the SAP Tower, the west stand that holds the those facilities, the press box, roof garden, and locker rooms at field level. It may not be inspirational in any aesthetic sense, but it is incredibly efficient. And yes, that’s the same SAP that has naming rights at San Jose’s arena. 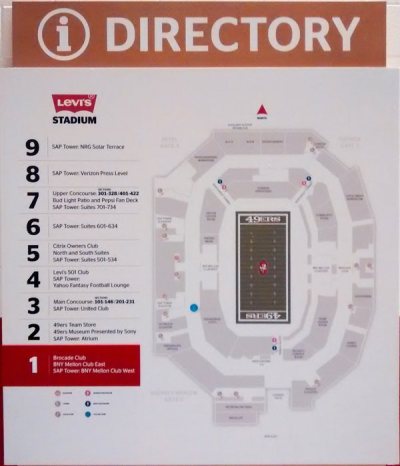 Levi’s Stadium has 9 levels within the SAP Tower

Our next stop was the Verizon Press Box on Level 8, which seems 10 times the size of its counterpart at the ‘Stick. There are multiple functioning elevators. The buffet area isn’t the size of a Manhattan studio. It’s wonderfully, blissfully air-conditioned. Now that might not sound like much, but the press box at the ‘Stick was terribly cramped, uncomfortable, and a death trap waiting to happen. A corridor behind special suites on the press level features old magazine covers with great 49ers of the past on them. The press box and its hermetically sealed environs are no place for cheering fans, which makes it great that the 49ers provided options that mimic press box-style views.

We walked up a few flights to reach the roof garden on Level 9. This area has gotten rave reviews for its flexible usage and its contribution to Levi’s Stadium’s LEED Gold rating, the first for a stadium in the US. Named the NRG Solar Terrace, the roof has a glass-fronted rails for those who want to watch the game, and hotel-like outdoor lounge areas towards the center. In the distance you can see the Bay to the north and the downtown San Jose skyline to the south. Various plant types are given reclaimed water, and in true California fashion there is an herb garden. The lounge uses reclaimed redwood from Moffett Field, a trick the San Jose Earthquakes are using at their stadium.

The last part of the tour was spent at field level. The grass looks ready to be torn up and resodded again, though it has gone through two games with few incidents compared to the first batch, which didn’t take. The 49ers’ next home game is on November 2, which will give 3 weeks for new sod to take hold if the work begins Sunday or Monday. Midseason resodding at least the areas between the hash marks is a common ritual for all NFL stadia with grass.

We entered one of two BNY Mellon clubs, which are located along either sideline at the 50 yard line. They’re swanky and feature the best food and drinks. The 49ers copied the Cowboys by incorporating the soccer-style midfield entrance from the locker rooms. The visiting locker room is on the north end, the 49ers to the south. Two auxiliary locker rooms are on the north end, as is the Gold Rush (cheerleaders) dressing room, a rarity among NFL stadia. The picture above shows a large rollup door that provides entry to a potential second home locker room, presumably for the Raiders if they every showed interest. I’ve heard the Raiders are interested in something else in the area temporarily, but that’s for another post. The locker room is not finished and would require a lease agreement between the 49ers, Raiders, the Santa Clara Stadium Authority, and the NFL before any substantive work could begin. That said, it shouldn’t take more than an offseason to get it ready.

Our tour group spent 90% of our time within the area defined by the SAP Tower, which is unfortunate. Every stadium tour should include a walk through at least half a concourse if not a whole loop. It makes it seem like there’s nothing to see in the other three-fourths of the stadium, when that obviously isn’t the case. I hope the 49ers incorporate that into future tours somehow. After all, they’re trying to sell seats and that’s where most of the seats are, right?

I’m headed back to Levi’s Stadium to take in the Friday Night Lights doubleheader. I’ll be roaming around, taking more pictures. If you have any questions, feel free to comment below or hit me up via Twitter.