The last post had some fortuitous timing, as a breaking Chronicle item came in just as I was about to hit publish. That was followed by articles in the Tribune and SF Business Times, so read those to get the full (for now) scoop.

In short, the City Council voted 6-1 to approve a 90-day extension. That’s a marked departure from the 6 months that was previously expected. Motivation for moving up the deadline is unclear. It could be confidence on the new investor group’s part. It could be the need for Oakland to show something before the February NFL relocation window opens, which only a 90-day timeline would accomplish. Perhaps it’s a little of both. In any case the City of Oakland and the new working group, New City Development LLC, will have until MLK Day to prove itself. 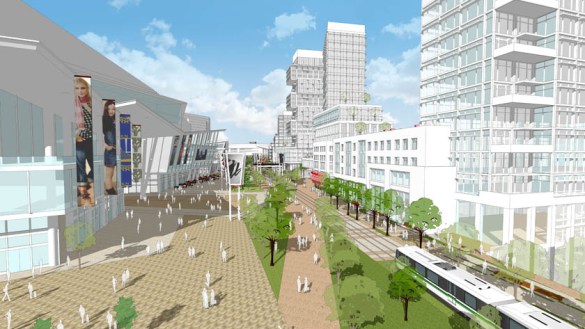 New City will be headed by Floyd Kephart of Renaissance Companies in San Diego. Renaissance is a consulting and advisory firm. Kephart’s main task will be to bring in the remaining money required to bridge the funding gap. He’s also responsible for signing up a master developer to oversee the entire 800 acre project. There are only a handful of companies that have experience doing projects of this size and scope. Forest City was expected to be the master developer originally, but they backed out when they saw the costs and potential returns. Miami Dolphins owner Stephen Ross runs Related Companies, another experienced firm for such work. Related is heading up the massive, $6.5 billion development north of Levi’s Stadium in Santa Clara. What does Kephart see that Forest City didn’t? We should soon find out.

The lone dissenting vote was CM Rebecca Kaplan, who pointed out that several deliverables are still missing, including the deal terms and financing model. Both of those items were expected over the summer, and when BayIG was pressed for them, were promised again in August (and apparently not delivered). Kaplan’s ties to the A’s extension and Lew Wolff’s recently returned campaign contributions make her moves somewhat suspect, but lack of follow-through on BayIG’s part is rather disappointing and unsettling when you consider the lead time they had to assemble the deliverables.

A big surprise to come out of the session was CM Larry Reid’s complete 180 on the project. He has been a fervent critic of the plan for at least a year now, and his effusive praise of Kephart is quite startling. That said, the project is in his district, so he stands to benefit if it comes through. He’s also not up for reelection this year, so he doesn’t have to back either Kaplan’s or Mayor Jean Quan’s visions. Reid remains Vice Chair of the Coliseum JPA Board.

Three months is an awfully short time to get the deal done. It’s not a matter of tying up loose ends. There are major deal points that have to be addressed.

It all feels like it’s going to get severely rushed, which could end in a horrendously bad deal for Oakland if they’re not careful. Quan’s calling the announcement a victory, though she neglected to mention that she said several times throughout the year that a team – the Raiders – would be a signed partner, at first during the summer, then late summer, then fall. Problem with trying to sign the Raiders is that because of the lack of concrete information on financing, investors, and viability, there’s no reason for the Raiders to sign on, and national reports echo that. Every time someone in Oakland talks up how the Raiders are getting ready to officially be a part of this, Mark Davis knocks that notion down. With the season almost half over and the NFL’s relocation window looming in February, there’s no reason for Davis to commit to anything before he feels it’s the right moment. The best deal for Davis comes with having the most options open, and that includes Oakland, Los Angeles, and maybe even San Antonio. He at least has limited leverage in that scenario. As for the the A’s, Lew Wolff is standing as far away from this as humanly possible, not wanting to make it anymore complicated, and not wanting to draw the short straw.

The JPA is busy getting ready for life after the Coliseum too. Last week they were ready to hire Republican Guy Houston, but the vote on his hire was delayed amidst renewed scrutiny into legal issues Houston had while in the State Assembly. The JPA did make a hire on Tuesday and his name will be familiar: former Oakland City Manager Robert Bobb. Bobb’s consulting firm is consulting the JPA on stadium and other development at the Coliseum, whether it’s Coliseum City or a Wolff-developed alternative. The cost to the JPA? $25,000 a month. Check out this org chart showing Bobb, Houston (or someone else), and the JPA.

The JPA doesn’t have the power to make any planning or zoning decisions. Only the City does. The County is co-owner of some of the land and could provide resources, so it also has a say in whatever happens. All I can say is that when you look at the above chart and all the different parties involved in Coliseum City, it’s a lot of cooks for one kitchen.