San Francisco has a new Summer Olympics bid in the works. This time they’re targeting the 2024 Games as one of four cities competing for the US bid. The others are Boston, DC, and LA. The bid is Larry Baer’s quixotic dream, and if the region wins the Games he will rightly lauded for his efforts.

Already, the bid the appears to be off on the wrong foot. A $350 million pop-up stadium is to be the centerpiece, though it won’t be in land-starved SF. Instead the stadium and the Olympic village would be housed at the windy, cold Brisbane Baylands just south of the City. The former railyards there are a massive toxic site, needing years of cleanup before they’re ready to build. An EIR is in progress.

The Chronicle’s C.W. Nevius suggested Oakland as the better site, though it makes too much sense to actually happen. As Mark Purdy notes, the Bay Area’s unique brand of provincialism will probably ruin what should be a fully regional effort.

The problems in the Bay Area are simple:

All of the places being discussed for a future stadium and village are brownfields like Baylands or former military sites like Hunters Point, Moffett Field, or Alameda NAS. Even Treasure Island has been discussed, and it too has the same infrastructural problems the others face. Tokyo, which won the 2020 Games, is seeing its budget blown to bits while trying to keep the bid compact – most planned venues are within only a few miles of the village).

The Bay Area, which has a gigantic body of water acting as both a physical and psychological barrier to residents and visitors, can’t dream of having a truly compact bid. Instead it needs to capitalize on the resource it has – a great number of existing venues that can host the Games with little need for new construction.

Bid specifics haven’t been released, but what I have seen so far concerns me. Besides the problematic Brisbane site, Coliseum City is mentioned as an adjunct. Meanwhile, $350 million would be spent on a disposable stadium. That’s utter nonsense. Phase the main stadium at Coliseum City correctly and you can save at least $1 billion while providing the Raiders the new home they want. Here’s how.

It starts with a technique used historically to build English soccer venues: build stands. One on each side of the field. The illustration above shows the track. Modern track meets and the Olympics require more buffer space around the track, which can be accommodated because the stands don’t have concrete poured all the way down to the field. The first 20-26 rows will be portable, similar to the east football seats for Mount Davis. The twin stands would cost $500-600 million to construct and hold 35-40,000 seats.

Next, put seats in the end zones and corners. Assuming that this stadium is ready for the Raiders by 2019, these seats don’t have to be on concrete risers. The space between the back of the football end zone and the track oval seats (brown) would be filled by additional rows that go all the way down to the field. There’s your Black Hole. New capacity: 62,000. That would work until… 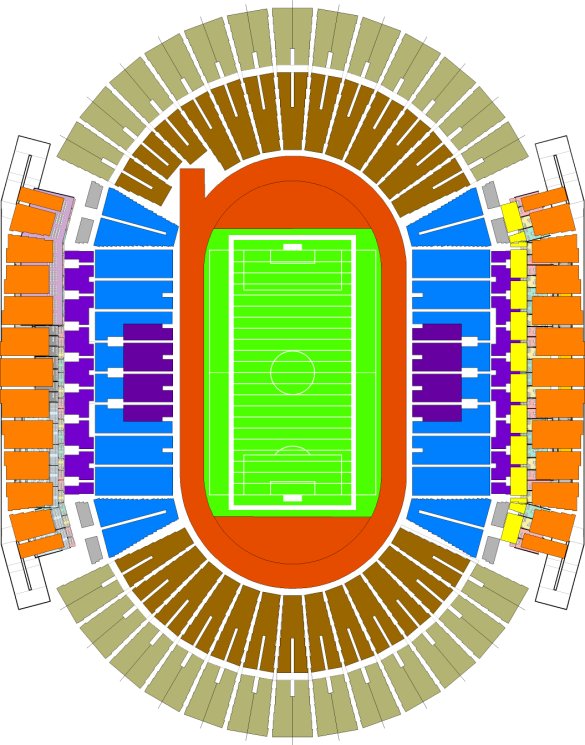 After the final game of the Raiders 2023 season, remove the Black Hole seats and start adding temporary sections (green-brown) behind the oval seats. Capacity becomes 80,000 for the Games. After the games end in August, the temporary sections can be removed for football season. If the Raiders want to finish off the stadium in a revenue-maximizing manner, they can undertake a project after the 2024 season ends to remake the end zones.

The team could add field suites or a huge end zone lounge like what the Patriots are planning at Gillette Stadium. Final capacity: 63,000. This approach would avoid the pitfalls London faced when figuring out what to do with their Olympic Stadium. They did bidding on the post-Games venue after the Games ended, inevitably creating a much more time-consuming, expensive process of stadium redevelopment. If the Raiders are involved from the get-go, they get the venue they want with minimal disruption and cost to themselves. The total cost of this is probably $1 billion. Why? Because all of the important stadium amenities are packaged within the original stands, limiting the amount of square footage built. The two stands can also be built quickly, which should also limit cost.

BASOC’s 2016 bid famously suffered an embarrassing death at the hands of the 49ers, who showed no interest in a multi-use stadium. They had their own vision for a new stadium, eventually realizing it. The Raiders don’t really have a vision for a stadium, looking more towards fulfilling requirements. BASOC and Baer would be smart to recognize the Raiders’ needs as an opportunity. Then again, if the Raiders aren’t in the Bay Area long term, BASOC would have little reason to engage the Raiders.

It’s a shame. There is no market in the country with as many existing, ready-to-use venues for the Olympics as the Bay Area. By 2024 we could have:

It would take SF allowing other communities to grab the spotlight. It would take Larry Baer actually being a champion to the region, which he is most certainly not. I too can’t see it happening. Dare to dream, Larry.

29 thoughts on “As it looks now, SF’s Olympic bid is already doomed”