The Chargers chose to stay in San Diego last week. Over the weekend, word surfaced that the NFL would not approve any LA relocations for 2015. So for now, St. Louis, Oakland, and San Diego have year’s reprieve. So despite the fact that Coliseum City doesn’t have a deal in place, Oakland’s self-imposed deadlines will come and go with nary a penalty.

Yet it’s little more than cold comfort, as the delay was either caused by the NFL’s and AEG’s need for more time, or perhaps just as likely, certain teams’ need for more time. Either way, the process is not driven by anything happening within the current home cities. All three cities are looking at huge nine-figure subsidies, with little actual desire to deal with the reality of it. Even if the cities give away land, it’s still a tangible asset that’s being given away.

Incoming Oakland Mayor Libby Schaaf will have a number of options available to her and the City Council. If the City likes Floyd Kephart’s work in salvaging the project, they can extend the deal for another 6-12 months, which may be enough to get the Raiders and investors on board. Coliseum City’s EIR work can continue unabated, and there’s no longer any immediate pressure to make a deal. As mentioned previously, shrinking the project from 800 acres to 200 is nothing but good for its feasibility. No need for new bridges across the Nimitz, a new arena, or a trolley. Conversely, it also means that “giveaway” resource of land is more scarce. At the very least it allows for better focus on what can and should be done.

Schaaf beat Jean Quan and Rebecca Kaplan with her cheery pragmatism. That will be put to the test once talks start up anew. It would be safe to assume that with the A’s not in jeopardy, any alternative plans Lew Wolff has for the Coliseum area can be safely placed on the back burner by letting Coliseum City play out. The JPA still needs to hire a GM/Exec Director to lead negotiations whether they’re facing Floyd Kephart or Lew Wolff, so that’s the JPA’s biggest priority. Schaaf has maintained in interviews that she sees the impact of 82 baseball games as much greater than 10 football games. That said, perhaps she could be swayed towards some flexible aspects of the Coliseum City proposal, especially if there’s a retractable dome involved.

That brings me to the fundamental problem facing Oakland: How much stadium do they want to build? If they want to build a flexible venue that will bring in a Super Bowl and a Final Four and other indoor events, the potential price tag will easily surpass $1 billion, perhaps reaching $1.5 billion by the time it’s completed. And with every $100 million over the current $900 million cost estimate, that’s another $100 million added to the still-unresolved funding gap. It adds up in a very painful way.

Despite the uncertainty surrounding the team, Raider fans feel they have one over on 49er fans thanks to Levi’s Stadium’s inauspicious debut. The Raiders getting over on the 49ers two weeks ago is practically Super Bowl-worthy in the Raider Nation, and the 49ers’ turmoil, highlighted by Jim Harbaugh’s impending departure, only serves as a second helping of schadenfreude. Of course, if the Raiders and Oakland get the Coliseum City stadium deal done, they’ll face the same problems the 49ers faced. Longtime season ticket holders will be displaced and relocated to less desirable seat locations as preferred spots go to corporate interests. The crowd will change in noticeable ways, just as it did for the Giants, Jets, 49ers, and Cowboys. The Raiders don’t have to worry about burning through a season ticket waiting list, making tickets less of a seller’s market.

If there’s a lesson to be learned, it’s that right-sizing the stadium has huge benefits. As the second team to official tarp off Mt. Davis, the Raiders didn’t suffer through the constant PR war the A’s have. Regardless, it’s hard to argue with the results. The Raiders have a nice consecutive games sellout streak, few embarrassing empty crowd shots (unlike Santa Clara), and a compact stadium feel that’s difficult to duplicate anywhere outside of Green Bay. A place that’s downright cavernous feeling for baseball is intimate for football. Think about that.

It’s no secret that I’ve advocated for different types of Coliseum renovations for the Raiders instead of a new stadium, simply because they’re cheaper and more feasible. It also needs to be said that if a renovation is done properly it can conserve that atmosphere, instead of letting it weaken by attrition. The Bears’ controversial rebuild of Soldier Field may have killed the stadium’s landmark status, but it preserved the atmosphere and improved the facility immensely, which was a win-win for the Bears and Bears fans. 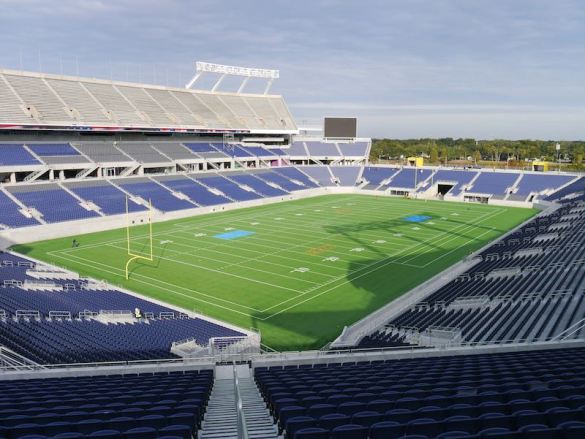 Citrus Bowl as of mid-December

In May I pointed to the renovation of the Citrus Bowl in Orlando, a $200 million project that gutted 90% of the stadium and modernized it in every conceivable way. The stadium reopened last month with a college football game. Next week it will host two bowl games on the 29th and New Year’s Day. The Citrus Bowl won’t run into any grass problems because it has artificial turf. The turf is unfortunate but understandable, given the cost of maintaining a grass field all year round when its big events occur in December and January. Other than that, the stadium looks practically like a NFL venue, with 60,000 seats, large club areas, party decks, and a completely new bowl with new seats installed throughout. All for $204 million. How was it only $204 million? While it’s hard to isolate specific reasons, a nine-month construction timeline certainly helps. As for the Citrus Bowl venue, it sure looks like an NFL stadium.