Rain has become a constant at FanFest, the Coliseum was at its muggy, leaky best. That’s probably just as well, since it motivates the players (and hopefully many fans) to head down to the desert for Spring Training. If only this rain came more frequently…

Anyway, if you’ve been to FanFest since its 2011 reboot, you know how this works. The main event is held inside the arena, which can hold thousands for the numerous Q&A sessions. The first two sessions involving player intros, Billy Beane and Bob Melvin draw a huge crowd. Unlike previous FanFests, the crowd was restricted to sitting in a third of the lower bowl. The arena’s upper level had VIP events.

Most everything else was held in the Coliseum, especially the East Side (Mt. Davis). FanFest may well be the only event that stretches the East Side’s facilities to its limits. Concessions were open along the regular concourses, and smaller Q&A sessions were held along the lower concourse near the foul poles. An interesting backstory is that for several weeks, today’s date was held for another event, a concert at the arena. Only late in the year did the arena become available for the big sessions. If the arena wasn’t available, the big sessions would have been held in the stadium somewhere, even though there were no TVs and the scoreboard system was not available.

Panorama from back of section 117

“Baseball 101” set up for intimate Q&A sessions, this one with David Forst

The project is underway, though the teardown of the old one isn’t complete. The fascia signage along the plaza level hasn’t been removed yet. Much of the work is being done in the press box, where the control is being retrofitted and expanded. The expansion is larger enough that the A’s have to install a server room of sorts above the press box, in some free space along the value deck. For some reason, the scoreboard project was delayed two weeks by the City of Oakland, who for some reason took some extra sweet time with the permits. Apparently no one told Permits the project was coming. #welp

State of the scoreboard project

The rain and winds threatened to wreak havoc on the whole affair, but thankfully they lightened up significantly midway through FanFest. With so many autograph lines shifted indoors to the East Side, it was much easier to move between the stadium and arena.

East Side had many of the autograph stations and fan booths 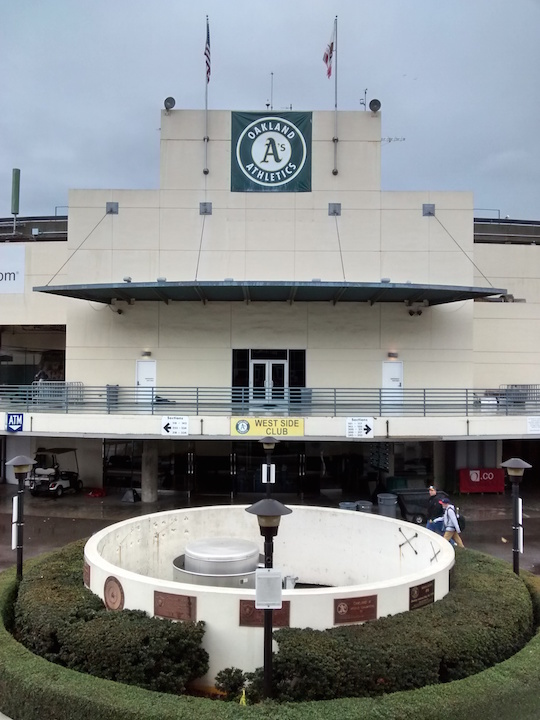 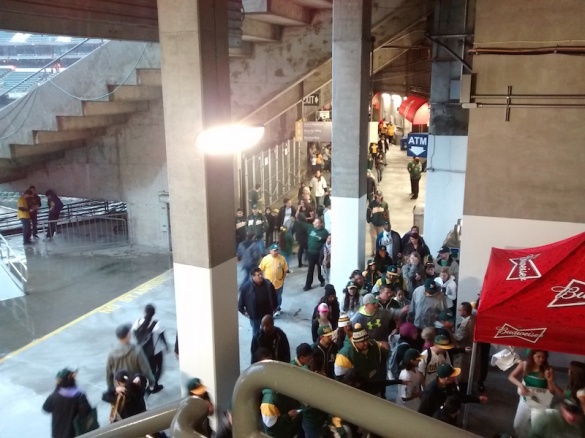 That left one major line behind home plate, the one leading to the Clubhouse Tour. For most of the duration of the event it was quite long, so I passed. Even though I’ve been in the clubhouse many times over the years, I still like walking through there because it takes me back to Moneyball.

The line died down when the marquee last Q&A session started at 3, so I rushed across to the stadium to quickly walk through the clubhouse. Why? Well, I wanted to provide a comparison between the Coliseum clubhouse and the new clubhouse at Hohokam Stadium.

Do you get a sense of how much bigger the Hohokam clubhouse is? It’s much wider and perhaps 50% larger.

This FanFest, I came too late for the BlogFest interview sessions, not that it matters much since I don’t write about the team much. Instead I floated between the two venues, catching up with fans along the way and making observations. A big thank you to Zak Basch for getting the credential to me after the deadline, even if I didn’t use it to its fullest.

My last tidbit is some advice a fan solicited from Coco Crisp, meant for all the new A’s this year.

Fan asks Coco’s advice to new players in clubhouse: “Don’t flush the toilet too many times or it’ll back up.” #AsFANFEST #KeepIt100

The more things change, the more they stay the same.