Would you guess there are 18?

Well, you’d be wrong. There are 15 downtown ballparks, half of baseball. They are:

All of these parks have one thing in common besides being located in a city’s central business district: they opened in the last ~25 years. Some are considered part of the portfolio of new classics, such as AT&T, Petco, PNC, Camden Yards, and Safeco. The rest, while perfectly good venues, are outclassed in one way or another. Many were anchors of large-scale redevelopment projects. Some were wildly successful (AT&T) while others couldn’t quite deliver on their promise (Comerica, Busch). Some are on the fringes of downtown. Others were placed on land that had a hard time being developed into more common uses (residential, office).

Missing from the above list are the most iconic older ballparks and their replacements. Fenway Park is in the Fenway-Kenmore neighborhood, 1.5 miles west of Boston’s compact downtown or central business district. Wrigley Field is 4 miles from Chicago’s Loop. Yankee Stadium is 8 miles from the southern tip of Manhattan, progenitor of the term downtown. Instead, these parks are in established neighborhoods.

5.2 miles from the Coliseum to downtown Oakland

Having legacy parks built away from the urban core was largely an economically driven decision, since it was often easier for team owners to assemble land away from downtowns. A century ago up through the end of WWII, parking was not a major issue, so the complications of having huge parking lots or garages didn’t come up. It was the pre-NIMBY area, with no environmental impact reports or CEQA. To say it was a simpler time would be an understatement. The ballparks thrived, gave the neighborhoods character, and became the landmarks we know today. Some of them at least. More likely, peers like Brooklyn’s Ebbets Field or Crosley Field in Cincinnati were phased out because they were too small, lacked parking for postwar suburban fans, or other reasons. In those situations, owners often turned to big, modern multipurpose stadia, usually in downtowns. As those modern replacements turned into ugly relics, they were themselves replaced by “retro” ballparks that harkened back to that simpler era. But they were situated in downtowns, not neighborhoods, so they didn’t quite have that magical character Wrigley and Fenway have. To date there hasn’t been a neighborhood park concept developed anywhere in MLB during the modern era. 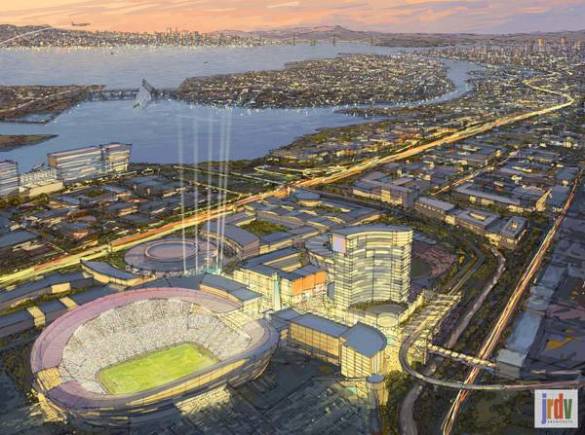 An early rendering of Coliseum City

Which brings me to Coliseum City. Throughout this entire Coliseum City process, backers have been selling the idea of this new, exciting, urban landscape, marked by glittering venues and tall high-rises. It looks like a second downtown for Oakland, doesn’t it? That’s a sentiment I had been hearing a lot since renderings by JRDV were released. Today this was confirmed by Andy Dolich, who wrote in an excellent piece at CSN Bay Area that the A’s have a good bargaining position for a future Oakland ballpark. The thing that bothered me was this:

Oakland is a gritty yet highly competitive city with suburbs, exurbs, and even far away counties with fans, businesses and broadcast entities that will support a coherent stay-at-home strategy for the Raiders and A’s. The desolation of China Basin turned into the Miracle of Mission Bay with AT&T Park as its nucleus. That same dream can turn into reality in and around the Oakland Coliseum site.

Let’s be clear about something. Coliseum City is not China Basin. Any attempt to draw similarities between the two is fanciful. China Basin is less than a mile from downtown and only 1/4 mile from South Park, long the ground zero for startups in SF. Combine that proximity with the touristy allure of the Embarcadero and you create that “miracle.” Oakland has a lot of land available at the Coliseum, but it doesn’t have any of those factors. The Coliseum complex is more than 5 miles from downtown Oakland. That’s nearly the length of Alameda, or longer than the Bay Bridge.

Coliseum City was conceived as a grab bag of everything a city politician might want to see developed on his/her watch: high quality office space, high-rise hotels, a fancy transit hub, housing, and yeah, those sparkling new sports venues that will keep the teams from escaping to other markets. Other than the presence of the existing BART station, there’s little to truly propel development. The complex is not a downtown, it’s an industrial area, so convincing developers and financiers to take a chance on the project has proven exceedingly difficult.

Take a look at the road plan below. The complex is somewhat screwed, because it’s hemmed in by a creek, railroad tracks, and the Nimitz Freeway on three sides. The lack of streets feeding into it creates a handful of major chokepoints. Tying them all together is a new loop road that traverses the complex. Downtowns don’t have loop roads. They have main streets. A loop road is something you’d find at a campus development. The infrastructure in place in and around the Coliseum is more suited to a theme park than a downtown.

A true downtown has a spine, a major arterial road through which transit and cars run. That’s not part of the Coliseum City, nor can it be. The major streets are a freeway plus San Leandro Street and Hegenberger Road, all of which form the perimeter of the core (downtown) area. BART also doesn’t run through, and it only provides one stop that can only access the “downtown” via a new pedestrian bridge. Downtown Oakland is served by two BART stations, both of which can be accessed from various streets and directions. Downtown SF has four stations. 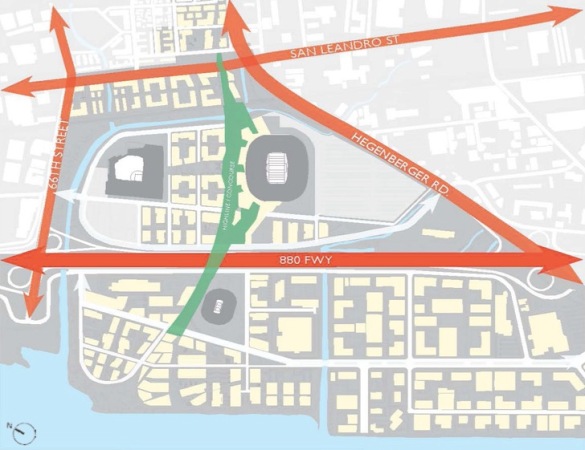 See what I’m getting at here? The lack of multiple ingress/egress points makes this a complete nightmare in terms of access. Imagine a dual-event scenario at the Coliseum in which both the stadium and arena are in use (you could also use a 36,000-strong sellout baseball crowd as a benchmark). Both have events that start at 7 PM on a weeknight. Now imagine two-way traffic added to the mix: a few thousand office workers leaving while another few thousand residents arrive. That’s bustling, right? There’s another term for it: gridlock. Established downtowns have a street grid that by its very design can help mitigate that gridlock. Coliseum City doesn’t, and it shows in the EIR’s traffic study. Only small mitigation measures are identified, and some intersections have no mitigation at all. As a result, the main intersections or gateways all end up with Level of Service (LOS) F grades, the worst you can get. Traffic is a dual-edged sword. When in a neighborhood it’s a sign of vitality. It’s also a major annoyance. Expanding BART at the transit hub would help encourage patrons to use transit, but that’s not going to be for everyone.

The spine is an elevated grand concourse that connects the BART station/transit hub to the football stadium and extends to the rest of the development via stairways. It could even run across 880 to near the Estuary. While it will deliver people from the hub to the rest of the complex, it will also serve as a huge wall separating the complex in two. I’m sure the idea is to evoke the wildly successful High Line in New York, a former elevated train line that was converted into a greenbelt on the West Side. The concourse is going to be much wider and serve more uses than the High Line, which at most points is rather narrow. The High Line snakes through Chelsea, a little piece of heaven in a part of Manhattan that lacks parks. The thing about the High Line is that people generally don’t use it as a main way to move between places. It’s a diversion. CC’s concourse is meant to be a main drag, so much that it has a streetcar embedded within. I’m going to guess that if the development doesn’t expand much beyond the Coliseum complex, that streetcar is a nonstarter.

The High Line in Manhattan at dusk

There’s a philosophical question to ask about Coliseum City. If so many people are talking about it in terms of a second downtown, what does that mean for the current downtown? Oakland’s downtown/uptown areas have survived the recession, riots and protests, and have gotten funkier and cooler in the process. It becomes a matter of how Oakland balances out the needs of a downtown that grew up on its own versus a planned campus development designed to resemble a downtown.

When you look at old parcel maps of the complex, you can see dotted lines where streets were supposed to be laid out. Originally the area was supposed to become a subdivision, carrying over the street numbering convention found on the other side of the tracks. I can’t help but think that the project would be more feasible and ultimately successful if its proponents tried to make it a real neighborhood instead of a planned campus. That would be the truly retro move: a neighborhood that works in scale with a ballpark, that doesn’t have pie-in-the-sky planning goals, that echoes the growth of other neighborhoods in Oakland. Yes, there would be parking as that’s a necessary evil piece of infrastructure. The plan would be complementary to downtown instead of competing directly against downtown. Chances are it would be more egalitarian than Coliseum City. If Oakland really wants to stand out, to make something special, it should stop looking jealously across the Bay for something to copy like a waterfront ballpark. A neighborhood ballpark, done the right way, would be that unique plan. Oakland could do that if it wasn’t so starry-eyed. Honestly Oakland, what would you rather have: a second competing downtown, or Wrigleyville/Fenway?

P.S. – When we saw the plans, Jeffrey (Editor at large) and I talked over some of the possibilities. One thing that we agreed on was that Oakland might have the best chance of developing the whole thing if Coliseum City attracted one or two major employers to take much of the office/R&D space. Say that a growing tech company in San Francisco wanted to escape the ultra-high rents there, but wanted space to expand on their own terms instead of leasing multiple floors in different buildings. Coliseum City presents one of the few opportunities to build a campus close to SF. It’s a potentially great deal for Oakland: high-profile company relocates to Coliseum City, leases a large amount of space, has its own BART station. In a way that feeds into the idea that Coliseum City is really a campus, because instead of 12 or 20 different companies taking up different amounts of space, you have one. The company has its own big commuter shuttle buses and a fleet of private Ubers coming in and out, just like Silicon Valley.

106 thoughts on “Coliseum City: The campus that wants to be a downtown”