The jockeying for position in the race for LA continues. Oakland approved its ENA extension on Friday, paving the way for Alameda County doing the same on Tuesday. I’ll have more on that following the Tuesday meeting. The Carson stadium project has gotten enough signatures for a public vote later this year (or more likely a City Council action bypassing a vote). Rams owner Stan Kroenke has new renderings of his proposed stadium at the old Hollywood Park in Inglewood. All of this is in advance of the NFL owners meetings in Phoenix this week. All of the players want to give the impression that they have the most advanced, stable plan. All of them, except perhaps Mark Davis, who continues to prefer riding on the coattails of others’ plans (Carson, Coliseum City). Both Dean Spanos and Kroenke are making the case for having their own stadia, privately financed, with no need to house a second team – but the capacity to do so if the opportunity arises. This saga will continue to unfold over the coming months, with everything coming to a head after the Super Bowl 50 when the relocation window opens. Unlike 2014, these stadium plans are becoming more concrete with each passing week, thanks to political actions by Inglewood and Carson.

Previous renderings of the City of Champions development showed zoomed out, distant images of the stadium. Now we’re getting closeups of the exterior and interior. The design is groundbreaking and familiar, all at once. Undertaken by HKS, the architectural firm that penned the more showy NFL stadia of recent years (Cowboys Stadium, Lucas Oil Stadium, the upcoming Vikings’ stadium), the stadium is is covered by a transparent roof canopy, with open sides to allow for air to circulate from outside.

Like (half of) the fixed, transparent roof at the Vikings’ football cathedral, Kroenke’s roof will be covered in a fabric called ETFE (ethylene tetrafluoroethylene). It’s extremely thin while having excellent light transmissive and insulation properties. Most importantly, it’s very light for a roof material, weighing around 3 ounces per square foot depending on the number of layers used. The lightness of ETFE allows the roof structural work supporting it to be lighter and less complex compared to steel roof structures, and more reliable than the previous generations of fabric roof technology that used Teflon or fiberglass-embedded fabric. ETFE was first used in high-profile sports applications such as the 2008 Beijing Olympics, where it was employed at the Birds Nest national stadium and the Aquatics venue. Instead of being part and parcel with the stadium, the roof will extended over a public plaza, acting like one gigantic canopy. While Southern California never needs a roof for football, the canopy will allow the stadium to be used for numerous big indoor events, such as the Final Four. 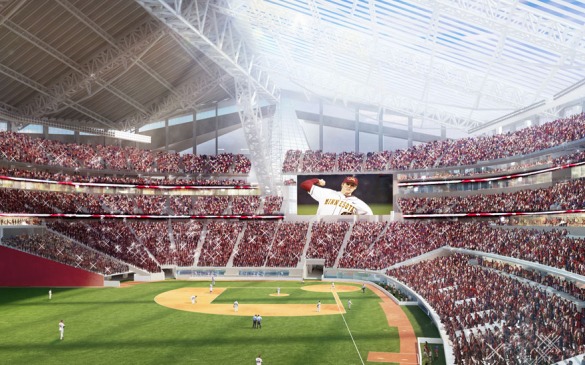 Baseball in the Vikings’ stadium? Yes! Golden Gophers, during the early spring of the college baseball season.

Google’s proposed campus in Mountain View is also likely to use ETFE as a canopy over constantly evolving workspaces. 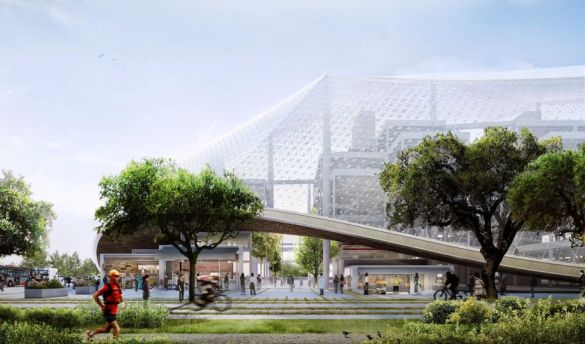 Google’s buildings will be surrounded by transparent roof canopies, with fresh air allowed to circulate from open areas.

Technology has come a long way since the first domed stadia were built. The Astrodome, which used skylights for the roof, was fatally flawed as not enough light came through to grow grass indoors successfully. That led to the invention of Astroturf, which had the even more appealing original name of ChemGrass (should’ve stuck with it, Monsanto). Numerous other domes became the unfortunate going trend in many cities in northern climates. Most had an air-supported roof, such as the Hubert Horatio Humphrey Metrodome, Pontiac Silverdome, BC Place, and the Hoosier (later RCA) Dome. After a number of deflations and weather-related incidents, air-supported roofs gave way to more reliable technology. Some of the newer domes in the late 80’s and 90’s used fabric roofs but weren’t air supported, using compression rings or cable supports to hold the roof up (ex.: Alamodome, Georgia Dome, Tropicana Field). Few air-supported structures remain in use, most notably the Carrier Dome at Syracuse University. Many of those will give way to replacement venues if not replacement roofs.

The always aesthetically pleasing ceiling at the Trop

That gets me thinking about St. Petersburg. Yes, the location of the Trop is terrible for the other Bay Area trying to get to a Rays game, but what if the dome roof were replaced by ETFE? Would that help the aesthetic there? At least fans would be able to see the sky instead a dull roof, and maybe the use of a lighter material would allow the roof to be re-engineered so that one or two of those compression rings could go away. Too practical to be a solution, right?