If you hadn’t heard, the A’s changed AAA affiliates this year, going with the Nashville Sounds after the Sacramento River Cats chose to pair up with the SF Giants. After 36 years at Herschel Greer Stadium and multiple failed attempts to find its replacement, the Sounds moved into shiny new First Tennessee Park. FTP is located downtown, steps from the Cumberland River and blocks from the State Capitol building and Bridgestone Arena, home of the NHL Predators. Poetically, FTP was built at Sulphur Dell, the site of Nashville’s first pro ballpark dating back to the 1850’s.

The façade behind home plate doesn’t follow the bowl shape, allowing for a great deal of additional usable concourse and flexible space. Five 33-seat suites dominate the seating behind home plate, including bar tables and glass door access to the suites (instead of the normal bunker suite configuration seen this low). To me this is the most controversial element of the park since it removes around 200 prime seats in favor of suites. 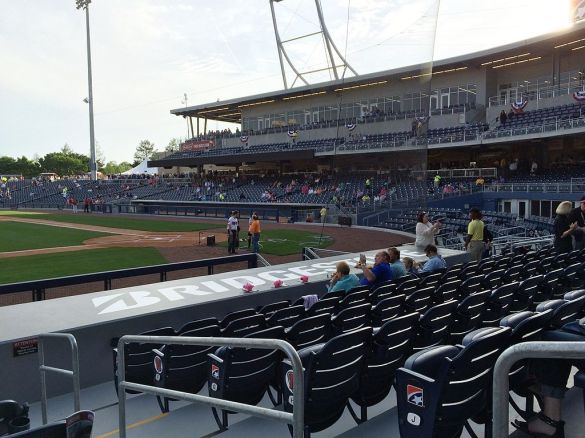 Additional suites are located above a club level that goes completely around the infield, which tells me that Sounds ownership knew there was a market for a healthy number of luxury options. Nashville’s a city on the rise, and has seen some success with its NFL and NHL franchises, so much that some are talking about Nashville being a major league city in the future – though not anytime soon. Maybe if MLB decides to expand again?

The big distinctive feature of First Tennessee Park is its massive guitar-shaped scoreboard, inspired by the old scoreboard at Greer. A huge video display takes up the “body” of the guitar, while a traditional line score is displayed on the neck. Another small video panel sits within the headstock.

The terrible weather that plagued much of the Eastern part of the country during the winter threatened FTP’s short construction timeline. Nevertheless, the Sounds and Populous got it done, completing the stadium in 410 days. That’s about as long as it took to build Aces Ballpark in Reno, though much longer than the 332 days needed to finish Southwest University Park in El Paso. So far, FTP is starting off on a good note.

P.S. – In June Southwest Airlines will start a non-stop route between OAK and BNA (Nashville). That’s a good thing considering the number of relief pitchers that will probably be going back and forth as the A’s search for bullpen solutions.