Floyd Kephart spent much of the week trying to rescue the badly damaged image of Coliseum City by giving interviews on three radio shows, while also assailing Matthew Artz, the BANG reporter who got access to part of the proposal given to Oakland/Alameda County. It was all flailing and little substance for Kephart, who until the PR disaster had mostly kept his message under control.

Kephart appeared first on Fred Roggin’s show in LA, then with Scott & BR on a podcast for the Mighty 1090 in San Diego, and finally with Damon Bruce on The Game.

Among the notes I gathered from Kephart’s interviews:

The pretzel logic used to argue that the NFL would be preferred is mindbogglingly awful. Sure, the NFL is the highest profile sport with the greatest cachet – at least in the US. It has bigger ratings and bigger national media coverage. Those factors, however, have absolutely nothing to do with bottom line arguments. The City and County are looking for the option(s) that provide the greatest economic impact. There is no way that hosting the NFL can provide this, with the possible exception of hosting the Super Bowl every year. We know that’s not going to happen, since the Raiders stadium will be too small, Levi’s Stadium already exists as host stadium in the Bay Area, and LA will have its own West Coast option soon.

Not including playoff games, the Raiders will bring in 550,000 per season (55k x 10 games). In a new ballpark, the A’s are projected to get around 2.2 million in attendance per season, 4x the football total. The important thing to remember is that the revenue streams (tickets, concessions, parking) will by-and-large remain with the team. The City and County are set up to recognize very little of gameday revenue. What, then, are football stadium backers relying upon to boost revenue? Out-of-towners. Fans of the Raiders and visiting teams will fly into Oakland, rent cars at OAK, stay at Oakland hotels, eat at Oakland restaurants. Sounds like a reasonable claim. What economic impact does that make?

The NBTA did a 2009 study on the top 50 cities in the US and tax impacts from visitors. It was focused on business travelers, but the basic tenets are the same. The study calculated hotel and car rental taxes, along with sales taxes from meals in each target city. Care was taken to separate downtown (center city) locations from airport locations, since they can have different dynamics. 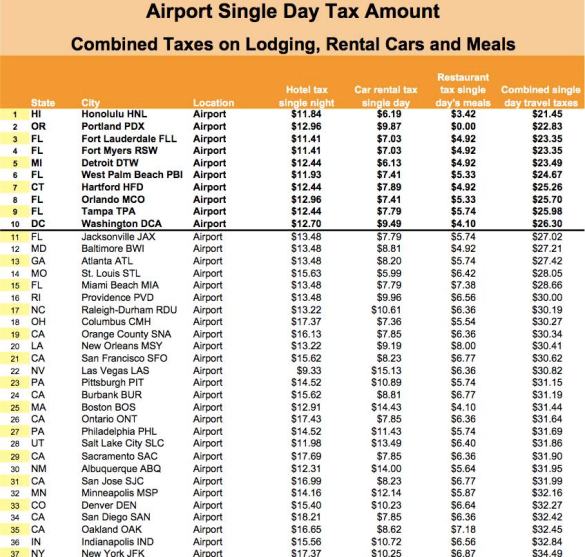 Each city is ranked based on combined taxes, which mostly range from $25-35 per day. Bay Area cities are in the middle of the pack statistically. Oakland comes out at $32.45 per visitor, per day. Now let’s take those 550,000 football fans, and let’s estimate that 10% of them are from out of town and fly in, stay for a night, and eat locally.

(Ed. – Commenter Victor pointed out my bad math. Corrected it’s even an even worse deal.)

Kephart wondered aloud why so many people had problems with the deal as proposed, claiming that it worked for everyone. If the Raiders are paying the full freight on the stadium and the City/County aren’t getting the old debt addressed, it’s not working for anyone except New City. Frankly, he shouldn’t be surprised at the cold reception.

P.S. – Now let’s apply the same economic impact to baseball. Far fewer tourists visit ballparks except during the summer, so it stands to reason that a smaller percentage of attendance could be attributed to baseball fans from out of town. If only 2.5% of fans, or 600-700 per game, fit that tourist description, that’s still 56,250 total visitors, more than the football tally. And while that football total is maxed out, the ballpark still has headroom of 500,000 or more fans per year, which means more tourists. Plus there are 2 million locals and casual fans to boost economic activity per baseball season, compared to 500k football fans.