Lew Wolff was profiled in the current edition of Athletics magazine. It amounted to a short biography, with some time at the end devoted to how Wolff sees the A’s future. Much attention has been paid to the following passage:

We continue to respect the desire of the Raiders for a new football-only venue, while we of course would like to play in a new or vastly improved baseball-only venue.

When most A’s fans think about a rebuilt Coliseum, what they think about most is the old Coliseum, pre-Mount Davis. Knock down the concrete eyesore in the outfield, bring back the bleachers and ice plant, fix up some stuff in the old Coliseum and the A’s are set. Which would be true – if this was 25 years ago. We’re in 2015, and the bar has been raised. Removing the football seats isn’t going to bring in casual fans, the attendees that come to Oakland so inconsistently and infrequently. In California, renovation works on old theaters, where wood and accents connote charm and warmth. A hulking stadium once known as the Oakland Mausoleum has no warmth. It would still lack a purpose-built ballpark’s intimacy. And for Oakland and Alameda County, they’d be stuck with $100 million in remaining debt and nothing to show for it. There is a bright side, however. If the A’s took over the Coliseum after the Raiders left, the A’s could claim and repurpose the Raiders’ locker room, eliminating the legacy clubhouse’s plumbing and sewage issues for good. City and County would still be stuck with the debt, but at least they wouldn’t have to pay the Raiders’ ongoing operating subsidy at the Coliseum, worth $7 million a year.

Another option could be to repurpose Mt. Davis and replace much of the old stadium, since Mt. Davis is the newest part of the Coliseum. I posted such a concept six years ago to little fanfare, which is exactly what I expected. It’s exactly the compromise plan that you might think it is. 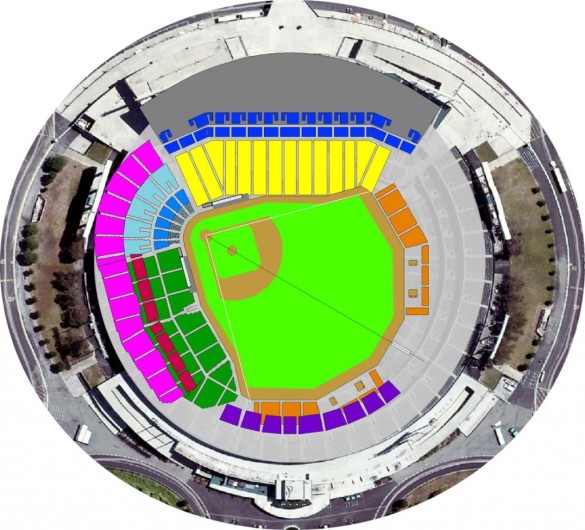 It’s sort of the Two-Face of ballparks. The top level of Mt. Davis would be removed, seats replaced on the lower and club levels, plus remodeling of the concourses and suites. New seating decks would be built behind a relocated home plate and first base line. The mezzanine and club levels of the old Coliseum would remain since they fill needs: a restaurant in the outfield and additional seats. The new scoreboards could be assembled into one extremely wide (36′ high x 290′ wide) or large (72′ x 145′) display. No additional major infrastructure other than a revamped field drainage system would be needed. Of course, some issues regarding the sight lines from Mt. Davis would have to be resolved, partly by rearranging the lower bowl and adding new seating options.

A new, bespoke ballpark on the Coliseum grounds is the preferred option for A’s fans and MLB. Is it for Wolff and Fisher? Sure, as long as it pencils out. The idea that Wolff pitched last year was that there was a way to privately finance a ballpark while also addressing the debt by taking it out of the public’s hands. Unfortunately that concept has been hit with two huge doses of reality.

Issue #1 is that it’ll be hard to service the debt of the new stadium and the old stadium using all private sources. Right now Mt. Davis costs low eight figures to service, but imagine if that debt wasn’t serviced by relatively stable sources like taxes, instead paid by stadium revenues. Financing costs would balloon, making an already expensive project even more expensive. That’s why I found it curious that Oakland Mayor Libby Schaaf seems resigned to having the public sector pay off the debt. To go that route would be significant reversal, as one of the goals of Coliseum City was to find ways to wipe away the albatross.

That leads to Issue #2. The sale of the (public) Coliseum land could turn into a political third rail thanks to protests by East Oakland and housing activists. Wolff, like many other developers, is finding that the economics aren’t quite right for a market value project at the Coliseum, where the higher prices are needed to subsidize other project components like the stadium. Even if the pricing worked out, the same aforementioned activists would raise hell over potential gentrification. When the Coliseum City process started, there was an acknowledgement that the various public and private partners would have bargaining chips to play. Slowly, each of those chips is being taken away. We’ll soon be down to the basics: building a stadium privately, with no help.

If a new A’s ballpark can stay reasonably priced, there are ways for it to be financed by Wolff. Like the Giants, there will be some annual set aside for debt service that impacts payroll. Lean years could become extremely lean thanks to the mortgage. The A’s could work a deal with MLB to ensure that they stay on the list of revenue sharing recipients in the next CBA. It would be a reasonable request given the A’s being pigeonholed into Oakland.

Regardless of the difficulty, a new ballpark has to be what MLB and Rob Manfred want for the A’s and Oakland. The old compromises don’t die. They evolve and transform. That’s the new reality.

50 thoughts on “Coliseum renovation for baseball?”