One of the questions I’ve been fielding over the last few years, especially now that the Warriors are trying to move to San Francisco, is Can a ballpark fit in the space occupied by the arena? The idea is that if the Raiders could somehow find a way to stay in Oakland at a rebuilt (new on the existing site, not renovated) Coliseum, the arena could be torn down to make way for a ballpark. In doing so, none of the capacious parking would be affected except during the construction phases.

The short answer to this is: No. If I’m being generous, I’ll say barely.

To understand why, you need to look at the way the complex was laid out in the first place. Remember the old sewer interceptor? It runs in an easement through the Coliseum complex, splitting the stadium and the arena. EBMUD, which maintains the interceptor, needs to have 24/7 access to the interceptor for maintenance.

Combine that with the power lines and other utilities that run through the complex, and suddenly the choices for siting the venues were reduced. If the interceptor had not been there, or had been rerouted around the edge of the complex, the venues probably might have been placed in line with 880, allowing for more of a buffer around both instead of pushing the arena up against the freeway. Such an arrangement would’ve been better for fans going to the arena from the then-years-from-completion BART station, since they would’ve had a more direct route there instead of always having to walk around the stadium.

Nevertheless, here we are. The arena is situated within its own 8 acre parcel in the complex. The fit is tight thanks to the multi-lane 66th Avenue off-ramp.

Last month I suggested the HomeBase site, which has 50 feet more width than the arena site yet is also less than 600 feet wide. This is obviously narrower. A tight fit equates to two specific limitations. First, there’s little flexibility in terms of orienting the field. If the A’s wanted to orient the field the same way as the existing field, they would need:

To further illustrate the squeeze, let’s drop everyone’s favorite ballpark, PNC Park, where the arena is. I’ll include the approximate location of the sewer interceptor so you can see the problem. 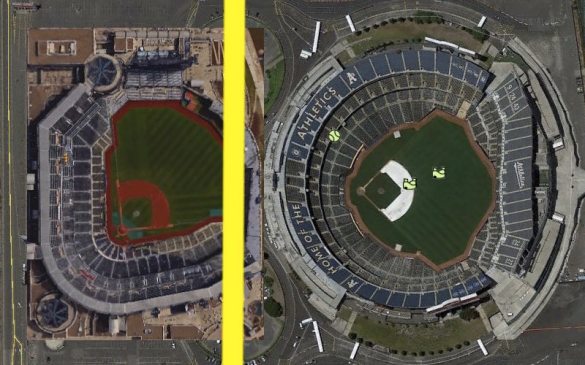 The resulting dimension down the right field line would be around 275 feet. Talk about a short porch.

Compromises could be made to make the fit better, like reducing the size of seating decks, concourses, and buffer areas, all of which would negatively affect fan experience. The field orientation could also be rotated 15 degrees north (counter-clockwise), opening up space down the RF line while reducing space in the opposite corner.

Of course, we can’t discuss this option without considering the circumstances and ramifications. Should the Warriors leave by the summer of 2018, there would still be nearly $60 million of debt remaining on the arena. It’s likely the City and County will have to swallow the debt while the A’s paid for a will construction costs, perhaps including demolition of the arena. Combine that demolition and site prep time with a two-year build, and the A’s would be in a new ballpark there by the start of the 2021 season. If the Raiders were also staying, Mark Davis could get his stadium on the current site, also by the 2021 NFL season. Where the Raiders would play during the construction period is anyone’s guess. Same goes for the remaining Coliseum debt.

Back to the ongoing Coliseum City saga. Chris Dobbins of the JPA and Save Oakland Sports announced that the public is welcome to attend Floyd Kephart’s presentation at Lungomare on Tuesday morning (unclear on the time of the event).

I’m interested to see if any activists showed up.

18 thoughts on “Hypothetical: Could a ballpark fit where the arena sits now?”