Word came Friday that Floyd Kephart is out from the Coliseum City project, which, you might think, should lead to the demise of Coliseum City.

With Kephart’s negotiating rights set to expire on Thursday, the Oakland City Council and Alameda County Board of Supervisors agreed in separate closed door meetings this week to cut ties and send him a letter outlining deficiencies in his latest proposal, said several officials who asked not to be named because the talks were private.

So that’s that. The deficiencies were largely financial, as we’ve discussed ad nauseum. Having three separate groups try and fail at making Coliseum City work is a clear indicator that there’s really nothing that will make it work, at least the way Oakland wants it to. Part of that is the Raiders’ and A’s insistence on maintaining surface parking instead of allowing for a bunch of development surrounding the stadia. Another factor is the extremely limited public resources on hand, especially in the face of outstanding debt on both the old stadium and arena. The stadium debt is not only an obstacle, it is a potential showstopper. Nine figures of debt doesn’t simply get written off if you’re a municipality. 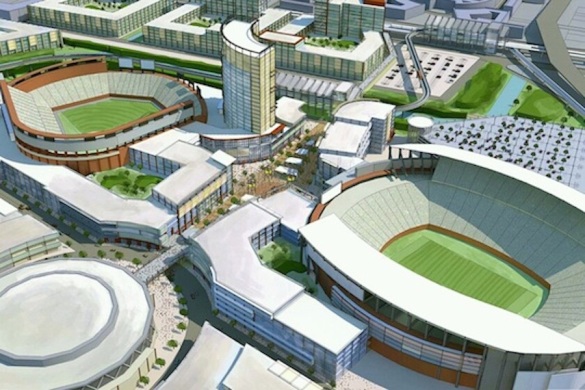 Oakland and Alameda County continue to talk to the teams, while also exploring a buyout of the County. Alright, before any proposals are made or any substantive talks are to begin with either team, the buyout situation absolutely has to be sussed out. The uncertainty regarding the County’s involvement, which lingered in the background for over a year before becoming a front-and-center in January and remains an unresolved issue to this day, cannot be allowed to complicate any future stadium talks. Either the County is fully out or it will be a partner. There is no in-between. If it comes up again, it will show the NFL and MLB that the East Bay can’t get its act together and can’t be taken seriously. It’s that important.

The buyout is not going to be easy. Normally these types of deals are worked out through swaps of real estate, since municipalities tend to be cash-strapped. Whether that’s workable for the County is another matter, since there is actual cash to be paid out on an annual basis by both parties. If both parties decide to follow through on the County’s wishes, I would expect the deal to be wrapped up in the next six months.

Next, all of the important players are going to have to step it up to a degree that they haven’t displayed so far. That includes:

Wolff and Davis will have to provide detailed plans for whatever they want to build at and around the Coliseum. That’s not a problem for Wolff, since he already has HOK working on it. On the other hand, Davis has no such experience and will have to rely heavily on a third party to work out the details. That is, if the Raiders are still staying in Oakland past January. Davis is actively involved in the Carson stadium project. If the NFL puts off the LA decision for a year, or tells Davis to stay put for a while, Oakland will have no choice but to work with him on whatever stadium idea he’s thinking of. Schaaf will have to become a much more visible champion of the project, similar to what Quan did for Coliseum City. Haggerty, who was a leading public figure for the Fremont stadium project, would likely do the same here, with the possibility of fellow supe Nate Miley partnering or taking the lead. Basically, both the public and private sector will need champions, willing to bear the scrutiny and spend money/assign resources to get the project(s) through the planning process.

There’s no timetable for any of this to happen thus far. We may hear more towards the end of the year. I sort of expect the A’s to release renderings and initial plans sometime after the season ends, though I wouldn’t be surprised if that didn’t happen. Procedurally, everyone’s still at the mercy of the NFL, since it actually has its a timetable – one subject to delay – but a timetable nevertheless. Sure, the path towards a new stadium at the Coliseum is less complex with Coliseum City out of the way. Don’t mistake that as being close to a deal. There’s still an extremely long way to go, and many complications to resolve.

P.S. – I neglected to mention the status of the Coliseum land. Ten or twenty years ago, the notion of giving away or highly discounting public land in order to ink a stadium deal was considered a mere cost of doing business. It was the much more politically expedient concept to giving away both the land and a heavy construction subsidy, which most cities were and still are doing. Over the last year groups have protested giving away the 120+ acres at the Coliseum because it represents a giveaway to billionaires, while also not properly addressing the growing housing crunch and concerns about gentrification in East Oakland. What was once practically a given (as it was for the SF Giants in 1997) is now shaping up to be political land mine if not handled properly. As Schaaf and the City Council work out the land DDA (development and disposition agreement), they’ll have to be mindful of how the deal looks to the public. That’s sometimes what happens when parties (cities, teams) don’t act quickly enough. It only gets harder.

104 thoughts on “What to expect when you’re not expecting”