2/7/17 – I originally posted this a year ago yesterday. The basic information hasn’t changed, so I’m reposting it now. This comes as the Chronicle’s Scott Ostler reported on the A’s potentially requesting light rail (a streetcar) to bridge the gap between BART and Howard Terminal. Have at it. – ML

My last article with Howard Terminal as the main subject (and not as an aside) was posted on November 15, 2014. That was nearly 15 months ago. Since then, few things have changed in the immediate area. The site remains without a tenant, short or long-term. While relationships with shipping companies SSA Marine and Matson solidified, the same can’t be said for rival Ports America, which pulled out of Oakland completely.

No site studies were completed on Howard Terminal, so in the event the site become an official relocation site for the A’s in the future, it will again come time to figure out just how much it costs and how long it will take to get the site ready. Thankfully, in Mayor Schaaf’s recent push for HT, a preliminary figure has been floated for site prep and infrastructure: $90 million. To me that sounds conveniently low, especially because $90 million is also the figure to get the Coliseum ready for the Raiders – even though we don’t know how much can or would be developed there.

Fortunately, we know that the infrastructure budget would include at least one bridge extending Market Street over the Embarcadero and Union Pacific tracks to Howard Terminal. There’s also a good chance we’d see a small parking garage to serve the stadium, probably for players, management, and VIPs such as suite holders. The actual cleanup cost is still to be determined, since we don’t have a proper sense of the footprint and placement of the ballpark in relation to the waterfront, not to mention the fate of the rest of the 50 acres.

Oakland has embarked on updating its Downtown Specific Plan. As is often the case when such updates come around, the city has chosen to expand its definition of downtown, now including Howard Terminal as part of an expanded Jack London district. This is a good move if the purpose is to recast HT as Jack London Square’s commercial flank to the west, instead of HT’s legacy as a dirty, blue collar, West Oakland port facility. 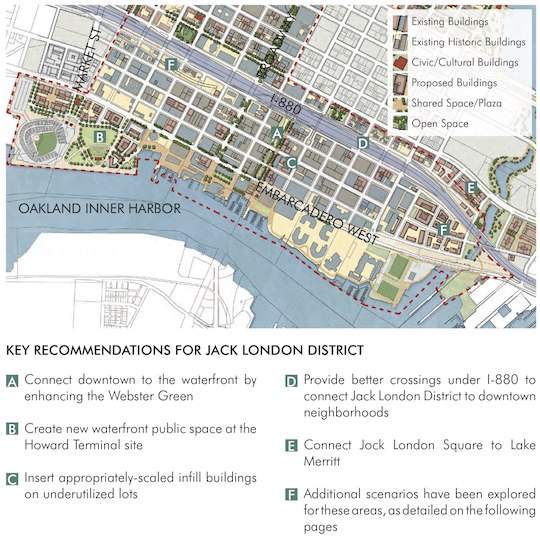 The expansion makes the Jack London District quite large, extending 1.25 miles from west to east. That’s as long as a stroll from the marina all the way to 21st Street down Broadway. Or in walking distance, 25 minutes or so. To get a sense of distance and walkability, Oakland plotted out a series of maps showing rights-of-way, transit access, and walking distance from key points. Take this map, for instance:

Based on where the the ballpark is located, it’s about 10 minutes from Jack London Square. It’s another 10 minutes to the nearest entrance for the 12th Street BART station. That’s going to require some sort transit option to bridge that distance, either via a more frequent Broadway Shuttle, the long-rumored Streetcar project, or another BART station in the vicinity of JLS. Because BART inclines from a tunnel to an elevated viaduct as it runs by 880, the most likely place for a station would be Market and 5th St. That’s a great location relative to Howard Terminal, only 1/4-mile away. There’s room and BART-owned land there for a new station. To accommodate BART’s up to 710-foot trains, the station would have to be located between Market and Brush Streets.

The downside of BART at Market and 5th is that it’s 3/4-mile from Jack London Square, though at least it would be in the district (barely). A streetcar would conceivably serve more locals and non-ballpark users, but its route would run closest at JLS, again, 1/2-mile away. In a 2012 study, the streetcar’s estimated cost was $202 million. An infill aerial BART station would cost $70 million or more to construct. To me, if there’s a choice it’s a no brainer – build the BART station. But I’m not an Oakland resident, I’m an A’s fan who cares most about BART access. Citizens of Downtown Oakland who want a more comprehensive transit plan for their neighborhood may not find such an option satisfactory. The location is also not conducive to a big transit-oriented development plan, which makes it less attractive for grant funding, a possible necessity for construction.

Some may think that this infrastructure is unnecessary for the ballpark. They point to the numerous fans who walk from the Embarcardero BART station the long way along the waterfront to AT&T Park. Yes, people do that. They do it because it’s scenic. The walk from 12th Street to Howard Terminal is not scenic, whether you’re taking Broadway, Washington, or MLK. Forcing people to walk 20 minutes after taking in many cases a 15-25 minute BART ride is not convenient. It’s not up to the standards the public expects for transit availability. And it’s incredibly disrespectful to the needs of the disabled and seniors. You know what those people have in San Francisco? They have the ability to transfer to MUNI without leaving the station. Thousands of able-bodied fans do the same thing. They have the option to either walk or take transit directly to the park. That’s pretty close to ideal. Or if you want ideal access, there’s the Coliseum and the BART bridge. A’s staff are on hand at each end to help fans in wheelchairs. In upgrading ballparks, we shouldn’t downgrade access. We’re better than that.

31 thoughts on “If Howard Terminal ballpark happens, so should a new BART station for it (repost)”