It nearly hit 90° in the Valley of the Sun this week, so you know that spring training is rapidly approaching. Pitchers and catchers report to Fitch Park today, though many of them and the position players have already been working out in preparation for the season.

The A’s haven’t announced any changes to Hohokam, the renovated stadium they moved into a year ago after decades at Phoenix Muni. Most of the big-ticket items were taken care of the first go-around. It’s a spacious, comfortable place to watch and should remain so for years to come. The biggest change I know of is not the facility but rather a new way to get to it, or at least close to it. Valley Metro finished the first phase of its Mesa extension last August, stretching to Central (downtown) Mesa. The station at Main Street and Center Street is the closest to Hohokam, 1.7 miles directly south of the stadium.

1.7 miles from the Center & Main light rail station to Hohokam

That distance is probably a bit too long to walk for most. Credit to those who do. Alternately, Mesa’s Downtown BUZZ free shuttle operates Monday through Saturday between Main Street and Brown Road, the major street just to the south of Hohokam. BUZZ runs all the way out to the Cubs’ Sloan Park if you’re interested. There’s also Valley Metro Bus 120 ($2 ride), which runs on Mesa Drive and Brown Road, stopping south of Hohokam. Pedicab would be a good option if it were available. And remember, if you go early you can visit Fitch Park along the way in the morning, catch a couple workouts, then head over for the 1 PM first pitch.

Speaking of Fitch Park, the City of Mesa announced that it renamed the unfortunately monikered “East 6th Place” at Fitch to “Athletics Way.”

The “Dead End” sign has to stay because it’s factual.

One difference for the A’s is the addition of two night games:

For those two you’ll have to drive/cab/rideshare.

For those driving everywhere or taking Uber/lyft to ballparks, there aren’t many changes of note. There are no new ballparks to speak of. There probably won’t be one until the Brewers decide to leave Maryvale.

Scottsdale Stadium is getting a new scoreboard. The new LED board is sized 24′ x 40′. That’s not as large as Hohokam’s jumbo 26′ x 56′, but it’s still a massive improvement over the old traditional scoreboard/postage stamp video combo. 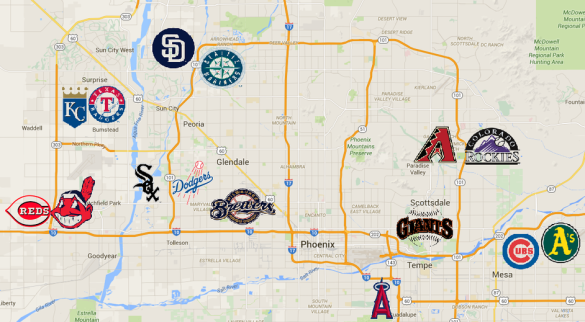 If you’re touristing down to Arizona to catch a weekend’s worth of games or longer, chances are that you’re staying in one of four places:

All four of those locations are fairly close to the eastern bunch of Cactus League parks (Salt River Fields, Scottsdale, Tempe Diablo, Hohokam, Sloan). The five West Valley parks (Maryvale, Camelback Ranch, Surprise, Peoria, Goodyear) are a good 15-25 miles away from the preferred cluster of hotels. You shouldn’t stay in the West Valley unless you intend to spend most of your time at one of the facilities or you’re staying with family in, say, Glendale or Peoria.

If you’re getting around the Phoenix area, it’s best to look at just the area as basically two freeway loops. The largest is constituted by I-10 to the south and Loop-101 acting as the west, north, and east perimeter, about 15 mile x 20 mile rectangle. Camelback and Peoria are close to the west segment of Loop-101, while Surprise is way out beyond, and Goodyear is on the way out to LA. The Maryvale neighborhood is somewhat sketchy, though it shouldn’t matter since the Brewers’ home schedule is all day games. Meanwhile, the east cluster is nice and compact, with all ballparks within roughly 5-10 miles of each other. The other freeway loop is Loop 202, which covers a 10 mile x 20 mile section known as the East Valley, including Mesa, Chandler, and Gilbert. I-17 runs north to Flagstaff, whereas US-60 comes from the northwest, merges with I-10, then heads east towards New Mexico. The funny thing about driving around Phoenix is that even though the area is much smaller than the Bay Area, I find that I’m less tolerant of driving long distances. Maybe that’s because I’m conditioned to driving longer distances in the Bay Area, and there are more freeways to handle those distances. It may also be Phoenix’s monotonously endless street grid. Either way I’m surprised at how the landscape affects me as a driver.

If you’re planning a trip to the Cactus League and you have questions, drop a note in the comments. I’ll be happy to answer whatever I can.