Updated to include poll:

What is the right price for Oakland/Alameda County Coliseum complex, including venues, land, & debt?

BANG’s David DeBolt reports tonight that the investment group led by Ronnie Lott and Egbert Perry offered to buy the Coliseum complex for $167.3 million. The offer comes during the 90-day MOU between the City of Oakland and the investment group. They would get the Coliseum stadium, arena, the surrounding parking lots, and additional adjacent properties bought by Oakland over the past several years. 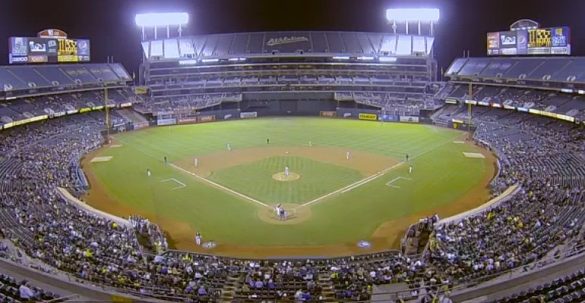 The $167.3 million offer would also retire debt on the Coliseum. There’s still $113 million of debt left at Mount Davis after 2016, making the remainder for the land worth $43 million. Or is it? The arena’s debt after the Warriors leave is still very much in dispute. That figure could be upwards of $88 million even if the Warriors stay through 2019 as they announced earlier in the summer. Lott-Perry’s first pitch looks like a serious lowball, especially if they have to factor in the arena’s debt.

Perhaps this is why we got another update late:

Chances are that the two parties are not exactly close on the sale price, an issue Perry encountered in Phoenix. In that case Maricopa County is looking to sell Chase Field, not so much because of debt (which has been retired), but because of $187 million of deferred maintenance due for the venue. The maintenance costs and revenue generating potential combined to suppress the ballpark’s appraised value, $40-50 million in 2010. That could rise with a reappraisal, though there are no guarantees. Either way, it’s somewhat absurd to think that a large, modern MLB facility could be worth less than the average project cost of a AAA ballpark, such as the one planned for San Antonio.

The City has no reason to sign anything right away since their own property appraisal hasn’t yet been released. They’ll be guided by that document to counter Lott-Perry. Lott-Perry will be under pressure to minimize this particular cost as much as possible, since every dollar spent on land means another dollar that isn’t spent to bridge the gap on the new Raiders stadium, $300-400 million and rising with every day.

NFL relocation heavy Eric Grubman visited Oakland on Sunday and Monday to see how things were progressing. For now there’s little to report. By the end of the MOU period it will be imperative for Oakland to show something substantive that represents all parties, including the so far non-participatory football franchise. As for the A’s, they are under no pressure to make any deals right away, somewhat to the chagrin of MLB commissioner Rob Manfred. At the very least, the process is moving forward.