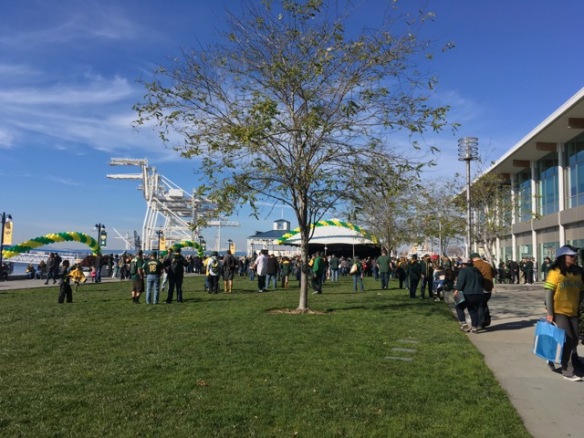 As I arrived at the Jack London Square Amtrak station around 9:30 AM on Saturday, I looked around. No fog. Thin cirrus clouds. The sun was warming the air. This was, for once, going to be a good Fan Fest. Which it was. The A’s had a permit for 7,500, and if it rained as it had over the past several weeks and during most recent Fan Fests, they were expecting a modest 3,000 to show up. They were even considering putting up a tent at the Ferry Lawn, if only to provide more cover for fans. Instead, they got a reported 15,000 fans to show. And according to Sean Doolittle, the crowd actually measured 1.5 million in attendance. Frankly, I’m all for #alternativefacts when it comes to A’s attendance. 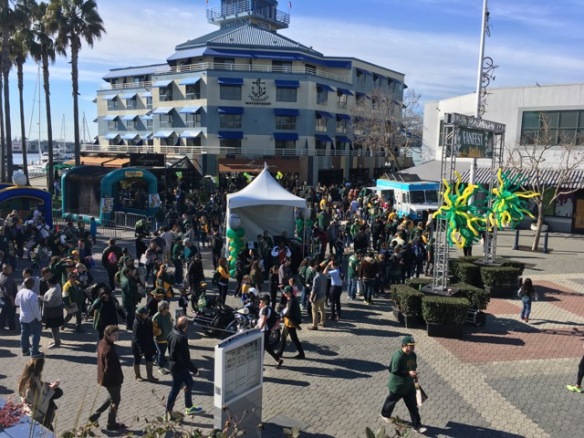 Fans took over Jack London Square: waiting in line for autographs, sampling free food from several food trucks, watching player interviews, or taking in kids’ activities. Some came out because of the great weather, others wanted to check out nearby Howard Terminal. I’ll have an expansive post on that later this week. For now I’ll give you some initial thoughts.

15,000 is an impressive crowd for Fan Fest, and Jack London Square makes for a pretty decent already-built ballpark village, doesn’t it? That’s only half the size of a good new ballpark crowd, and it’s on Saturday morning, not a traditional heavy traffic window as you would see most weeknights. Still, things seemed to go without incident. There could have been plenty, though. Counting the train on which I arrived, there were five trains rumbling through Jack London Square in a roughly 40 minute span coming from both east and west, including a long freight train. I also saw a near accident: 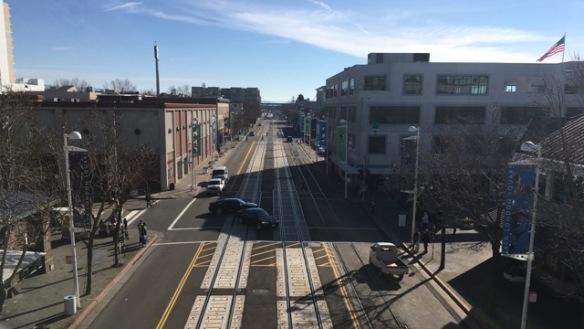 Pedestrian bridge at Yoshi’s between Washington and Clay

The driver of the black Tesla was confused about where he could turn, thanks to the barricades at the Washington Street entrance to JLS. He stopped on the tracks before making a U-turn. Thankfully there was no train in the area. This is the same intersection where, only two weeks ago, two members of seminal Oakland jazz group Tower of Power were tragically hit by an oncoming Amtrak train. I know I sound like an obsessed worrywart about this train safety aspect. I can’t emphasize it enough, not just because safety is paramount, but also because the whole area needs to be safe for the companies that operate trains in the area. 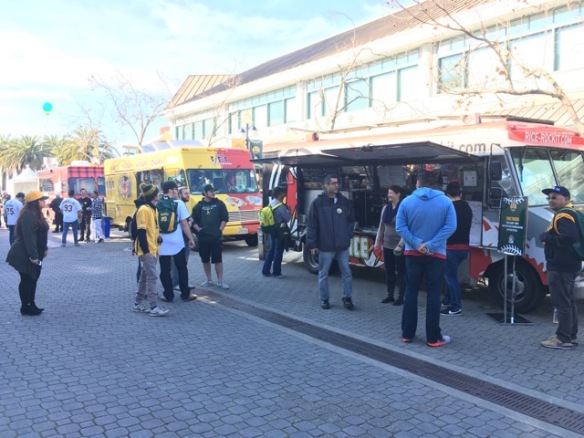 At Fan Fest itself, new team president David Kaval reaffirmed the A’s commitment to Oakland. The new marketing slogan is “Rooted in Oakland.” The Shibe Park Tavern rebranding of the West Side Club space at the Coliseum is to make it more baseball-leaning and fan-friendly. Kaval’s chief desire during this planning stage is to have a very intimate ballpark experience with “neighborhoods.” Anyone who has been following this story back through the Wolff years knows that those last items aren’t new. They’re not location-specific. As for those locations, they remain the Coliseum, Howard Terminal, and two “in and around Lake Merritt.” Those two are the Laney College and Peralta CCD sites. Kaval was quick to praise the Howard Terminal locale especially with the perfect weather at the time. He also mentioned that the team will need help from fans in terms of community support and lobbying at the city, county, and even state levels. Citing his experience in bringing Avaya Stadium to completion, Kaval emphasized the need to deal with the special regulations unique to Howard Terminal, including the Tidelands Trust. Kaval’s language has been careful to not favor one site over another, no matter what fans want to read into tweets and news quotes.

The thing Kaval didn’t provide was an announcement regarding the site choice. That’s still in progress, though Kaval promised a timeline along with renderings and the usual things that come with such an announcement. The simple fact is that we don’t know if any of these sites will be available when the time comes, so hedging by studying four sites (down from twelve) is the most prudent move the A’s and Kaval can make for now. So we’ll have to wait for some months to come before that major event. Until then, enjoy the food trucks!

7 thoughts on “Fan Fest at JLS a rousing success”