Last Saturday I spent most of the day (and night) at a Derby party. One of the hosts is from Kentucky, so the party had great authenticity all the way down to me taking a nap in the front yard after a group photo. That’s my authenticity, at least. During the brief lucid state I was in as we feverishly bid up horses, I started to feel a sense of familiarity to the whole affair. That’s because ever since the Dave Kaval-led A’s narrowed potential ballpark sites down to four in and around downtown, fans and observers everywhere placed bets on their own favorites. I’ve gotten no shortage of requests to handicap the four sites. While I’ve pointed to the Raiders-less Coliseum as the easiest, fastest site due to work already done and reduced complexity, there are far more interesting sites out there, sites that could prove more compelling to the A’s. 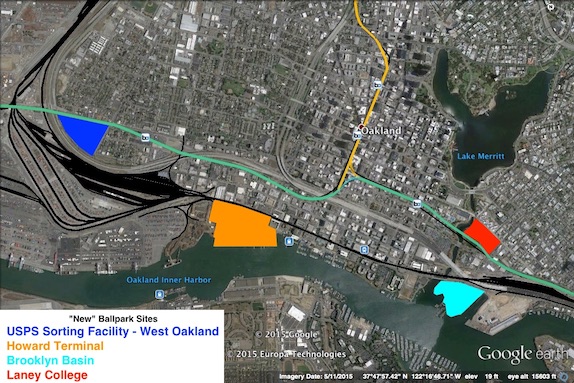 Kaval has been careful to not tip his hand. In public interviews and private conversions, Kaval praised all three sites, pointing out advantages for all three. If you’re gleaning some sort of favorite from him, it’s probably your own bias at play. Nothing wrong with that, just acknowledge it and understand that the team has a process it’s trying to follow.

That didn’t stop Oakland Mayor Libby Schaaf from opining that the A’s have narrowed down the sites to Lake Merritt (Laney College) and Howard Terminal. Today, Robert Gammon expanded on that culling, explaining that the A’s are worried about getting 35,000 fans across the active railroad tracks running through Jack London Square. Brooklyn Basin, or the part of it that was being offered, is no longer under consideration. I suspect this is because they couldn’t assemble all of the needed land. Lake Merritt is actually two sites, the Laney fields and the Peralta Community College south of East 8th Street. Gammon’s scoop is that the A’s may be focusing on the Peralta site. That’s a bit of a surprise because most observers and Laney site fans have been fantasizing about those fields forever. Assuming that Laney wanted to keep its athletics program, bringing in the A’s is a nonstarter. Peralta is smaller, is further from BART, and rather close to 880. Peralta’s also smaller, with at most 10 acres available. Or does it? 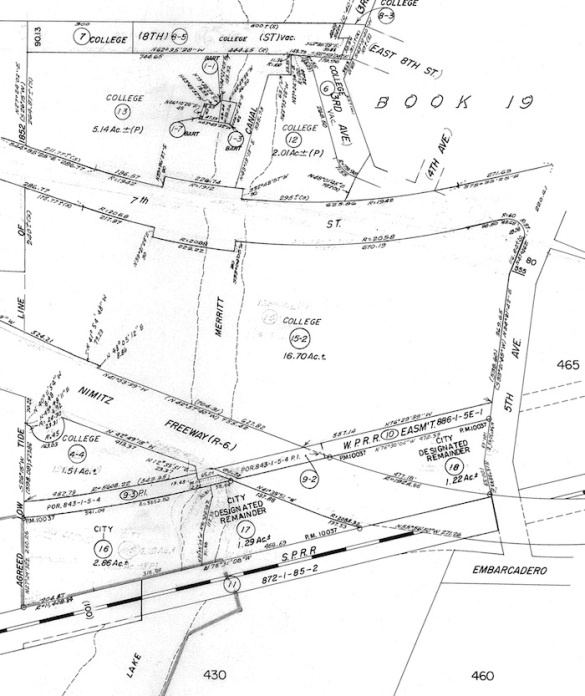 In the above map the word “College” has “16.70 Ac.” That nearly 17 acres includes all but 4 acres of the Laney College parking lot across Lake Merritt Channel. And because the ballpark is next to the Channel, a large buffer will be required along each bank for flood control and recreational purposes (Tidelands Trust). The buildable area is a square measuring roughly 600′ x 600′. That’s less than 10 acres in footprint, which would make the A’s park by far the smallest modern venue in baseball, while also leaving precious little room to build anything else. I wrote last October:

If the Peralta site is chosen, the administration offices and support for all four campuses in the district would have to be relocated. Perhaps a solution could include a large parking structure with offices atop. That could help serve parking needs for Laney, Peralta, and the A’s. It could also be crazy expensive on its own. 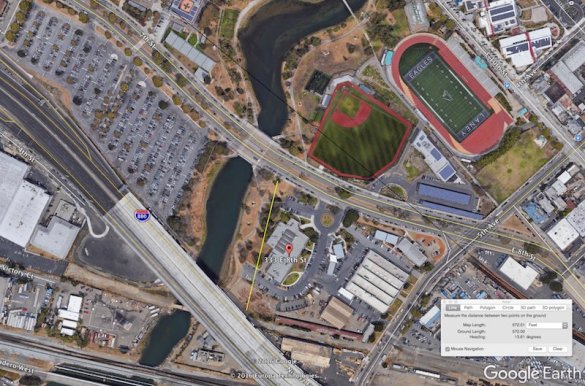 Since the undivided parcel includes the parking lot, any land deal could be a little easier if it’s confined to the 16.7 acres, though with the Channel removed only 4 acres are left to build a multi-level garage, the replacement district administration buildings, and other offices. A pedestrian bridge over East 7th Street would also be in order. That doesn’t leave much land to build a ballpark village unless the A’s buy or the city/college volunteer additional land in the area.

There’s also an old rail easement immediately south of the Peralta parcel, plus a corp yard butting up against the Nimitz. Those could prove useful in the future. It’s not realistic to expect any street grid changes or other infrastructure to help support the ballpark other than revamped on/off-ramps. This is little more than a thumbnail sketch of the Peralta site. We’ll surely find out more in the coming months. 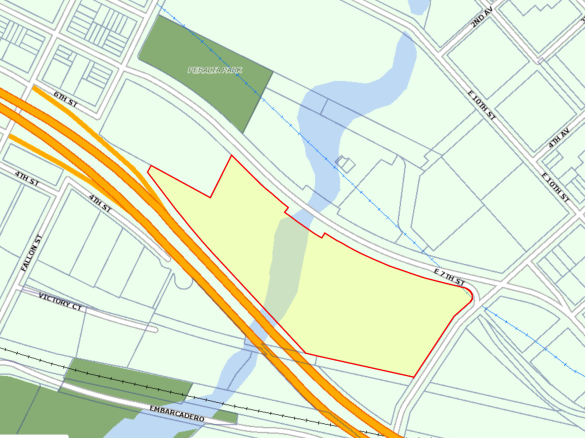 The Coliseum was mentioned as the third-place site in the Gammons piece, which is not a problem from a process standpoint. With the Raiders leaving, the Coliseum is not going anywhere and can also serve as a fallback position if the need arises. Then again, MLB has often said it prefers downtown ballparks, yet two of the last three parks (SunTrust, Marlins) were not built downtown, and the Rangers’ replacement will also be built in the suburbs. Only Target Field is downtown, lacking an adjacent ancillary development. Commissioner Rob Manfred’s seems to be conflating “downtown” with “ballpark+development,” truly a perversion of the traditional definition of downtown.

24 thoughts on “Laney, Peralta, and Howard: It’s a ballpark not a horse race”