When I went to the fireworks game two Saturdays ago, I noticed that one of the concessions stands in the upper deck was operated by one of those charity groups that probably provided free labor in exchange for a cut of the proceeds. Seems like everyone does it these days. So a light went off when I saw Tuesday ‘s Chronicle article about how the Jowel Laguerre, Chancellor of the Peralta Community College District (Laney, Merritt, etc.) has become a great supporter of the project to displace his own office with a future A’s ballpark. 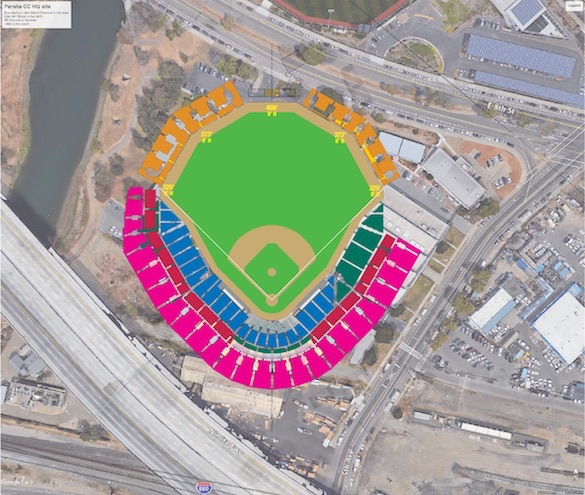 Scribe Kimberly Veklerov honed in on the opportunity in front of Laguerre:

Assuming the A’s play ball with Peralta as part of an extensive community benefits agreement, it could be a win-win scenario for both parties. Local college has a way to directly funnel students into high-profile employer next door, and team finds a nice source for cheap, vetted labor. Of course, there are limits to how extensively this could go, since you need to have experience in many positions – even food service – but there aren’t too many downsides except for existing Coliseum employees whose positions could be converted into internships.

Except for part of the Haas ownership era, the A’s nearly 50 years in Oakland have been run on a shoestring budget on and off the field. Former 49ers employee Chris Giles will become the A’s new COO, another step towards the eventual ballpark site choice and construction. More sales and marketing hires are to follow as Dave Kaval’s team attempts to sell the hell out of the A’s and the stadium.

That aside, there is some momentum with the Peralta site. There’s a champion in Laguerre, and the land deal aspect is simpler than Howard Terminal. Sure, the DDA will still be a thousand pages long, and there will be lots of students and Chinatown & Lake Merritt citizens who will vociferously protest whatever the deal it is. For more on that, check out Shawn Roberts’ Medium post on the focus group session he attended. (I originally planned to comment on the post, but I chose not to focus on a single set of observations.) Rest assured, the eventual choice will not come quietly.

The other sites have been in stasis since the baseball season started. Maybe there are super-secret talks that have resolved Howard Terminal’s myriad infrastructure issues or the Coliseum’s debt albatross. Maybe they still have a ways to go. I’m not so sure that an August announcement from the A’s is in order. Some of the media are sticking with that. Personally, I’ll be pleasantly surprised if they A’s unveil their choice in a few weeks. For me a few months feels more realistic.

P.S. – Check out Mark Purdy and Andy Dolich checking out the three sites from last week.