During a joint announcement with Oakland Mayor Libby Schaaf today, Dave Kaval made this rather pointed statement about how he envisions the future home of the A’s:

Having just a destination ballpark with a sea of parking — that’s not a suitable sports complex for the 21st Century for millennials, for fans.

Based on ENA discussions with Schaaf, that could be at Howard Terminal or the Coliseum. Howard Terminal remains a sort of mirage: beautiful in pictures but a sort of illusion up close. The Coliseum is the practical albeit thoroughly unsexy choice. We all know that the A’s are lukewarm at best on HT. It’s Schaaf’s jewel on the waterfront. Whether the A’s will truly continue to fully evaluate or keep it on the board to placate Schaaf is unclear.

Let’s break down some of the key pros and cons of both sites: 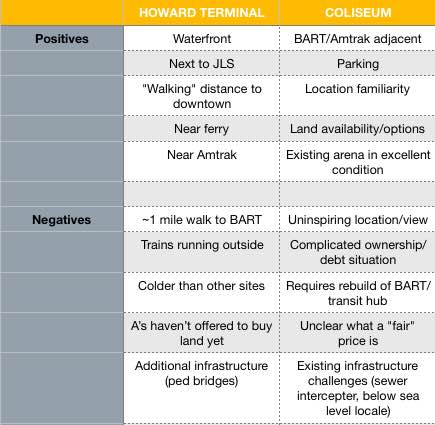 The difference between the two sites is the HT is still essentially a series of drawings without a framework for execution, whereas the Coliseum has a framework but few cool concepts (renderings). To that effect, I expect the A’s architecture firm HOK to release something by the end of the regular season. The previous drawings envisioning a Raiders stadium as the anchor with the A’s ballpark in the periphery can be thrown in the trash. What we can expect next will be A’s-focused with no trace of football in sight. (I hope the team of HOK + Snohetta + T-Square are retained as they could create something truly eclectic and local-focused.)

If the A’s are going to use all 120-130 acres, I’d love to see the creation of an Athleticsland, a multipurpose, multi-venue complex that retains the arena for concerts, wrestling, and drone races with a street plan that ties it together with the ballpark. I’ve been to a few of these concepts that have failed in the execution (Atlanta), and the A’s can do better. As long as they focus on turning out future generations of fans and not just the currently well-heeled gentry in Rodeo or Pleasanton, they’ll be on the right track.