I wasn’t sure how long I’d last at FanFest, so I made sure to pack a lot of activity in the morning just in case I petered out in the afternoon. That turned out to be good planning.

Took 18 minutes to walk from the Jack London Square Amtrak platform to the eastern edge of Howard Terminal via a Water Street packed with A’s fans. pic.twitter.com/4h317msHJy 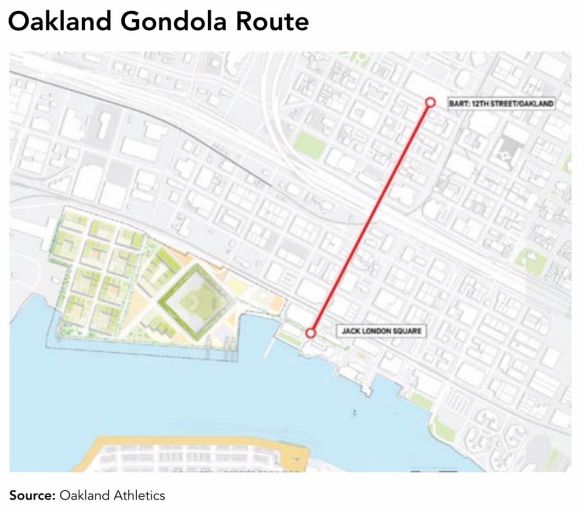 As is often the case, the escalator at the BART entrance was out of service. I took the stairs and groused about it a little. During our journey I showed Jeff the video the A’s and BIG posted of the gondola simulation. It looked cool, though it missed the transfer from BART to the gondola station (900-foot walk). The station itself is planned to sit above the intersection of 10th Street and Washington Street.

To make the station work, a two-block stretch of 10th Street would be converted into a pedestrian mall. Washington would remain open to vehicles, though the streetscape could be changed to accommodate more trees and perhaps wider sidewalks and less parking. I think it would be a good idea to put in a reversible bus lane for use during games. Jeff thought Washington should be closed to vehicles like 10th. I agreed, pointing out the political difficulty in doing so.

After we boarded a southbound BART train, I downloaded the gondola economic impact report. While the numbers from the report looked impressive, a closer look showed one particular set of numbers was missing: The cost to riders.

To be fair, this is how such reports are often written. The reason often given is that the agencies or private parties involved are working on different ways to charge for the service, and a final determination hasn’t been made. However, I took some of the aforementioned numbers and tried to figure it out.

If you write a $123 million loan for the gondola, you end up with an $8 million annual debt payment spread over 30 years at 5%. Add the operating costs (labor, maintenance) and it comes to $12.6 million per year just to break even. That’s important, because the A’s aren’t going to depend on local or regional mass transit funding to make this happen. It means that every one of those million riders, not all of whom will be A’s fans, have to provide the equivalent of $12.60 in revenue for every round trip. 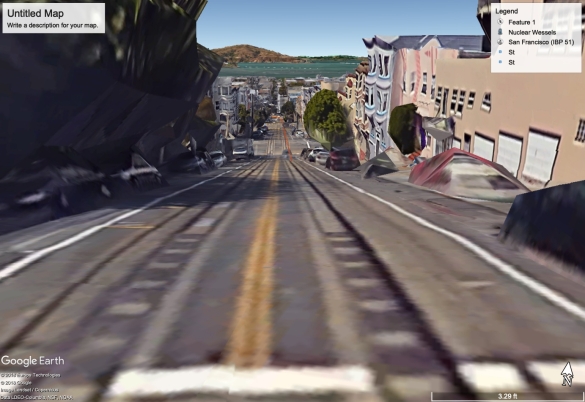 Should the A’s get this thing built, they’ll come up with innovative ways to help pay for the gondola. They could pass the cost on to subscribers of their All Access plans. Or levy a transportation fee with every ticket. Still, $12.60 to cover the literal last mile to the ballpark is a bitter pill to swallow. No wonder their pitch includes tourists! The gondola path includes a descent over I-880 down to the waterfront, reminiscent of the Powell/Mason and Powell/Hyde cable car lines. Speaking of which, have you looked at how much it costs to ride a cable car these days? $7 each way! Makes a $12.60 round trip look like a bargain! Sort of.

This is how the Oakland Airport Connector worked out. I rode the elevated cable-car line from the Coliseum BART station to Oakland International Airport. It cost me one-way $6.65 (less 50 cents if using Clipper). The tram ran smoothly and had only few other people in it. 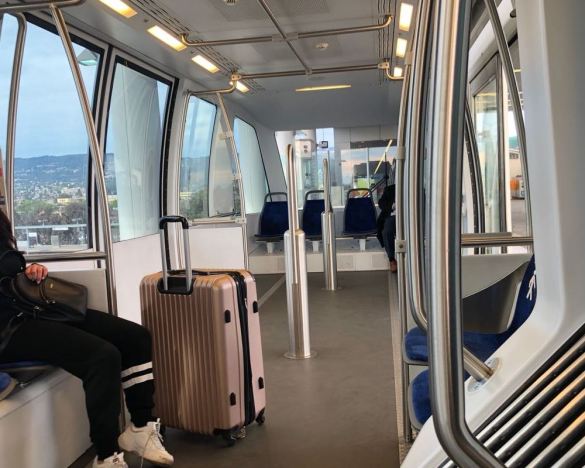 I enjoyed the OAC the two times I’ve taken it, but I can’t get past the idea that it’s an incredible waste of money. There is some history behind this money pit via Matier & Ross:

Despite the growing costs, the project was propelled forward because it was seen as a boon for the airport and a job creator in the midst of the post-2008 economic crash.

Now, however, it’s a headache for BART — and another red line in the system’s looming $477 million budget deficit over the next decade.

If BART is smart, they won’t touch the gondola with a ten-foot pole. Make that 900 feet for good measure. At least aerial trams don’t run into cost overrun problems.

Now consider that the cost of the gondola for a family of five, not including their regular BART fares or parking or anything else, could be $63. I’m about to get the Spring Training Pass. 12 games for $50 plus a $5 handling fee. Good to know bargains like that still exist.

25 thoughts on “Running the numbers on the gondola”