The BCDC held its first public meeting about the Howard Terminal project on Monday night. Download the report and the exhibits addendum with all the lovely renderings for more details. Among the details was the description of what the A’s are planning to build. There’s a lot to cover, so in this post I’ll focus only one a couple of items. I’ll cover the rest of the interesting stuff in the coming days.

Before we get started, I’ll quote a few paragraphs from the report.

For the purposes of organization in this staff report, the Baseball Park Development section considers all development east of Market Street which includes the ballpark, Athletics Way promenade, the development parcels surrounding the ballpark, Stomper Plaza, and the waterfront parks adjacent to the stadium.

The ballpark, with capacity for approximately 35,000 people, is proposed as an open-air bowl-shaped design. The ballpark includes a rooftop park that would reach an approximate elevation of +127’ NAVD881 and slope down to meet Water Street, along which home plate and the scoreboard are aligned. The ballpark seats are arranged in a configuration that creates a compact urban stadium footprint, with additional seating available on the rooftop park. The current proposal sets the field at approximately elevation +10.8’, which is about 3 feet below the existing grade of Water Street.

Athletics Way is a proposed approximately 60-foot-wide 4.7-acre raised promenade with at-grade connections at Water Street that wraps around the ballpark. The promenade would serve as a public pathway and retail street for neighboring residents and visitors to the waterfront. The promenade would rise to elevation +34.8’, allowing for ballpark operational facilities to be tucked underneath the grade of Athletics Way. On gamedays and event days, the promenade would function as the stadium concourse and would be limited to ticketholders only.

One of the big reveals is the location of free viewing area beyond the right field power alley. In the diagram below, it’s where the green and orange areas intersect.

The feature is much like the free promenade area open for Giants games, except it’s not hemmed in by the water. At Oracle Park the policy is to limit fans to three innings in order to rotate through lines. The ballpark at Howard Terminal is symmetrical, so there is a similar area in left field. I would expect that to be utilized as a group picnic area.

Okay, now the good stuff.  I’ll make some observations as we go (click on each picture for a larger version). Focus on the scoreboard in the rendering below. Stay focused on the scoreboard as the perspective and viewing distance changes in the following renderings. And note how high the roof deck is. According to the report, the roof’s elevation is 127 feet. The field sits at nearly 11 feet, making the difference from field to top 116 feet. That’s taller than any part of the original seating bowl, and would land somewhere on the upper deck of Mount Davis. Again, look at the scoreboard. Then look at the gap between the roof and the seating bowl beneath it. 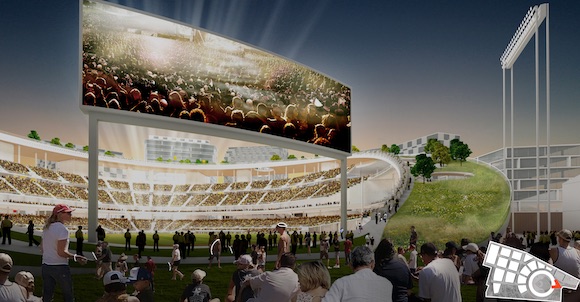 It’ll be a trek to get to the apex of this ballpark. Multiple portals will allow fans to enter and exit the roof deck to shorten the journey. The portals will not be open on non-event days, otherwise it becomes a free-for-all. That leads to the best rooftop perch in the house, right behind home plate. Note the scoreboard and the batter’s eye. Looks far away, doesn’t it? 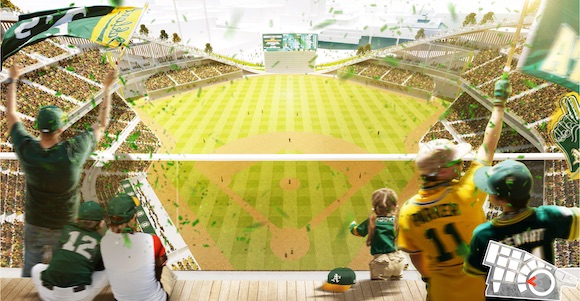 View from the Homeplate Terraces

BIG previously said that rim of the roof deck facing the field would be terraced, though not to the extent that there will be a large seating tier. Unless you need a wheelchair space or companion seat, it looks like you’ll have to stand. Considering how high up it is, that’s just as well. At least you can see in the image above a rail. You know how when you go to the upper deck during a typical A’s game there are always ushers to keep fans from loitering too close to the edge? Thankfully, there will be clear glass to prevent the pictured munchkin from plummeting. Assuming that’s how future A’s Access fans will be accommodated, there will surely be numerous opportunities to upgrade (not for free) to the good seats, on whatever basis their wallets can handle.

Back to the scoreboard. It’s slightly more visible because the new view looks further down the third base line. One consistent thing you’ll notice in all these images is how low the scoreboard is. Even the very first rendering has the scoreboard just above the batter’s eye. That’s more for the benefit of the folks in the seats as opposed to those on the roof. The roof is conceived in a way that will push most fans to the rim. Some of those fans will be 116 feet up. Others towards the foul poles will be lower, and the roof terraces will be placed lower as the roof descends to the field. I worry, though, that fans on the roof who don’t camp out early for a nice spot at the edge will have pretty bad or practically no views of the game.

Consider this image, on a hill behind home plate. Not only can you not see home plate, you can barely see the scoreboard. Yet it’s named Homeplate Hill, a rather ironic choice. That brings me to my chief misgiving about this ballpark concept. I get that incorporating a park into a roof can create some fantastic views. However, those views do very little for baseball fans. Baseball historically doesn’t have steeply terraced stands as is commonly done in hockey and soccer. Eyes tend to drift from the normal pitcher-batter confrontation to action elsewhere. But this might be a step too far. This works great as a park. It might curry enough favor from community and civic advocates to win the day. Yet it comes at a cost. According to the plan, a sold out ballpark will have 10,000 people on this roof, up to 116 feet above the action. When they scream and chant, the roar will extend out into the estuary and towards downtown, not at the players. Maybe the idea is to have the 27,000 in the seats create most of the noise. If so, they might want to consider piping in some crowd noise to make up the difference. Oakland has been home to numerous experiments in ticket pricing and marketing, many of them unsuccessful. A’s Access? Successful so far. PSL’s? A miserable failure. I’m afraid that this ballpark plan exemplifies the wealth gap… with an actual gap.