Who pray tell printed a cheer card like this?

Kaplan again thinks the A’s had a bunch of stadium stans show up even though the MOU is nonbinding and Council isn’t actually voting on the ballpark this round. Kalb tries to calm things down. #oakmtg #HowardTerminal

At a previous meeting Kaplan similarly admonished the gallery for turning the City Council meeting into a planned cheering session. That warning got the A’s to lighten up on the propaganda so as to establish some decorum. Perhaps this is another warning from the dais. Regardless, the MOU passed 8-0.

A’s President @DaveKaval tells me it’s a necessary step to release the environment reports of the site. Reports due out within a month, pending some state sign offs

I was hoping the draft EIR would be released around the time of FanFest this weekend. No such luck.

This also follows up last week’s Port Board meeting where the same MOU (memorandum of understanding) was discussed, approved, and sent to City Hall. That particular meeting had more port industry interests and fewer A’s fans in attendance. The purpose of the MOU is ostensibly to combine effort and remove duplicative effort, another way to streamline the process. The A’s spent a lot of lobbying time and energy to streamline part of the process, but we’re getting to the nitty gritty portion. The Port conveniently put together a flowchart, which covers only the areas related to Port development activities. 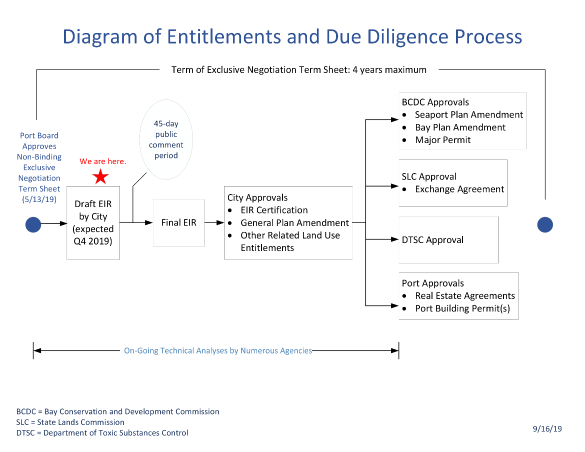 Compare that to the Ballpark Tracker page the A’s put together. Here’s one of the slides:

Now take that list of accomplishments above and try to overlay it on top of the required work the Port maps out in their flowchart. If it seems like not that much has actually been done yet, you’re not wrong. We’re essentially at the red star in the flowchart and the serious talks begin once the draft EIR is published. The complicated nature of building on the waterfront, in a city with unique development challenges and numerous stakeholders to mollify, makes getting a project like this going extremely difficult.

There’s a bit of a disconnect here. The A’s want to open the ballpark by 2023. The ENA term sheet also runs out in 2023, yet the ballpark project requires all of the dotted I’s and crossed T’s before the A’s can break ground. You’ve probably noticed that the tentacles towards the right side of the flowchart aren’t under the City’s control. Regional and State agencies will determine what mitigation measures need to be made and what’s actually feasible in what timeframe.

For example, let’s take the 45-day comment period. There will be plenty of comments from regular citizens and entrenched businesses. Staff will be required to respond. As I’ve mentioned before, it’s also the time for lawsuits from those with vested interests. Major lawsuits won’t be adjudicated in 45 days. It’s highly unlikely that the Port interests, who are ready to wage war, are going to roll over in 45 days. Thankfully for the A’s, AB 734 allows CEQA lawsuits to be limited to 270 days. However, legal maneuvers aren’t typically accounted for in project plans. Even with litigation limits baked in, that’s not going to stop the well-heeled from utilizing their retainers.

At some point later this year, we might yet again hear about how shocked or surprised someone from the A’s or the City is about recent news. No one should be surprised about any twists or turns this story takes.

District 3 Council Member Lynette Gibson McElhaney punctuated the proceedings by calling the MOU part of an “iterative, deliberative, intentional process to ensure that if a development goes forward that it is good for Oakland.” This time around, I don’t doubt that.

6 thoughts on “BUILD IT NOW”