Today had me driving from Toledo to Pittsburgh, so much of the time I was out of pocket or unable to catch up on news. Fortunately, I arrived at my planned midpoint as the JPA was convening for a vote. This is the place I visited: 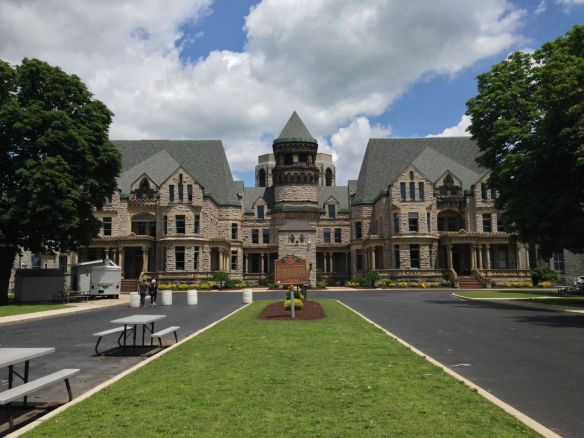 Look familiar? It’s not a college campus or an old hospital. It’s the old Ohio State Reformatory, located in Mansfield, Ohio. It’s better known as the site for the filming of The Shawshank Redemption, the great Stephen King-Frank Darabont picture that no one saw in the theaters but everyone saw on cable. I toured the prison, which would’ve been demolished if not for the film’s production and belated popularity. Like the Coliseum, much of OSR is in a steady state of decay. And like the film’s climactic scene, our own green-and-gold clad heroes at times have forded a river of sewage to escape the facility. I recognize that forcing a team of millionaires owned by billionaires to stay in mediocre conditions is nothing like actual prison. The point is that writing this blog at times is my own personal prison, one that I seemingly can never escape (especially the comments section or fools on Twitter). However, I made a promise to see this through, so it’s being done. Every so often I allow myself to feel a little hope, the dangerous concept that Red cautions Andy to squelch. Even after 9 years and with no end in sight, I still hope. I can’t allow myself to be completely consumed by cynicism. There’s already one Miserablist in the Bay Area, no need for two.

My own vacation activities aside, there is reason for hope to come out of today. First, let’s recap.

Now for the deal terms. The redone lease includes concessions made by both sides. Note: the deal must be ratified by the Oakland City Council and Alameda County Board of Supervisors before August 1.

However you feel about the parking matter, this is a large number of concessions from the A’s. As Interim City Administrator Henry Gardner pointed out, this won’t stop the big subsidy that the City and County have to pay to keep the Raiders and A’s at the Coliseum. Then again, the counteroffer wasn’t providing any relief for that subsidy either.

The A’s have also asked for any developer interested in the Coliseum to put up $20 million towards a redevelopment project. You can call this “earnest money.” It may sound like a lot, but it’s an important form of skin in the game for the developer, something that Colony Capital isn’t providing right now. Wolff certainly isn’t afraid of dropping that kind of coin, since he bought some Fremont land in advance and paid for the CEQA study work in advance. $10 million is a good amount to keep pretenders from engaging in talks.

This type of deal was available in November, before the last time the A’s and the JPA hit a stalemate. Selig and Rob Manfred then stepped in and negotiated the to-be-superseded short-term deal. For whatever reason, the City of Oakland hasn’t recognized that until now, Selig has treated the City with kid gloves. That explains their shock and outrage to Selig’s power play. Sorry Oakland, this is how Selig normally operates. It’s part of the standard commissioner’s playbook. At some point the hardass version of Selig was going to show up and back his owner. To expect different wouldn’t just be unrealistic, it would be downright delusional.

Things are not going to get better for Oakland. The other shoe to drop will be the reactions of Mark Davis and the NFL. Since the Raiders and A’s are effectively competing for the Coliseum, both leagues are likely to play tug-of-war with the City in order to get them to commit to either entity. That should provide Oakland with some amount of usable leverage, but that’s negated by the City’s lack of non-land resources and their concerns about the feelings of the other team/league. What you’re seeing right now is Oakland in paralysis. The NFL and MLB are only happy to shake Oakland out of it. Both leagues are gearing up their preferred and contingency plans. If Davis decides this is it and gives up on Coliseum City, the complex is all Wolff’s to negotiate. If Davis truly wants Coliseum City and sees a way to make it work, Oakland will have a tough decision to make. Which team, league and developer should they partner with? It’s a decision that no politician wants to make, especially during an election year. Yet that’s Oakland destiny. Get busy living? Andy Dufresne had to decide that he had enough of Warden Norton’s hijinks in order to plan his escape. Oakland has two Warden Nortons, and it will have to screw one of them. Otherwise Oakland could find its teams, like Norton’s money, all gone.