Ever since people have talked about building another venue on the Coliseum site, that talk has gotten shut down by the costs associated with relocating utilities, most famously the power lines that run through the complex. While such costs are a low percentage of the overall project cost, the fact is that they would have to be dealt with upfront. And since upfront costs often have to be borne by the team while the public financing piece gets squared away, it’s a budget item that no team owner wants to deal with if he can avoid it. 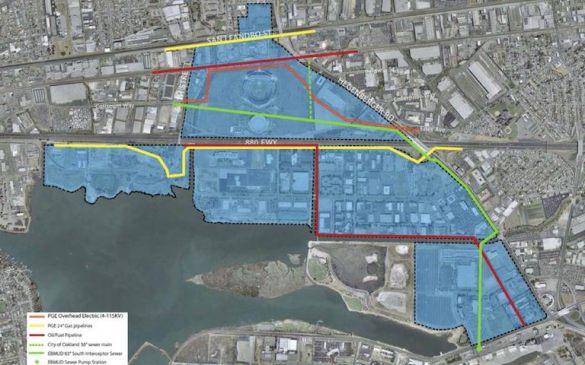 Utilities running through the Coliseum area. Orange are power lines, green are sewer

According to the infrastructure study released in the spring, the estimated cost to relocate the power transmission lines is $15.8 million. Another $1.4 million would be allocated towards relocating a sewer line (green dotted line). Both of those changes would be necessary to accommodate a football stadium on the D lot south of the existing Coliseum. The good thing is that the relocations would help a ballpark in the A lot as well, so it’s a one-time project cost.

A stadium built within the existing Coliseum footprint would require none of this infrastructure work. Should Coliseum City be developed down the road it would have to be addressed, but that would be the within the purview of the developer, not Mark Davis. There would still be the cost of demolishing the Coliseum, which is unknown at this point (could run into the $10 million range), which would be done whether the stadium was built on the site of the existing Coliseum or adjacent to it.

The cheapest alternative would be to re-do the Coliseum. Even then there would be an unknown cost of partial demolition of the Coliseum, so there’s a cost there. Ever wonder if Davis would be okay if the Coliseum simply didn’t have a baseball infield on it?

46 thoughts on “Why would Mark Davis want to build at the current Coliseum site?”