Update 11/5 6:00 AM – 100% of precincts are in and the ranked choice tabulations have been made. The next Oakland mayor is Libby Schaaf, who effectively trounced her rivals at the polls, nearly doubling Incumbent Mayor Jean Quan’s vote total. After RCV was calculated, Schaaf finished the night with 62.79% of the vote. Runner-up was Rebecca Kaplan. Quan was eliminated in the penultimate round.

Measure BB also won with 69.56% of the vote in Alameda County.

Update 10:30 PM – The polls have been closed for over two hours, but results have been coming late, the last major update coming at around 9 PM. In Santa Clara County there have been technical (website) issues. Alameda County appears to have similar problems. I’ll hang tight for another hour before calling it a night. So far Libby Schaaf is ahead in the Oakland mayoral race, though be advised that these are extremely early returns and the ranked choice tabulations are not factored in yet. 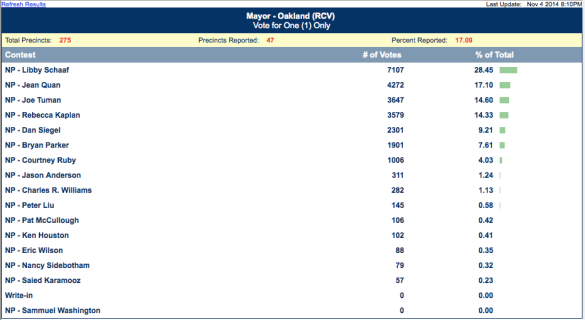 Update 3:30 PM – San Jose City Council voted 9-1 to approve the A’s land option extension. Stand for San Jose’s law firm, Pillsbury, disagreed with the lease option on CEQA and referendum grounds. City attorney John Boyle clarified that a referendum wasn’t needed and that the EIR was certified. CM Pierluigi Oliverio was the lone no vote, saying that if the A’s wanted the land they should just buy it.

Despite the general disinterest in today’s general election, there are some important races that will impact stadium efforts for the A’s and Raiders in the Bay Area. Let’s take a look.

Oakland’s mayoral race is the big one, with 15 candidates including incumbent Jean Quan. A KPIX 5 poll from two weeks ago had council member Rebecca Kaplan first at 19%, fellow CM Libby Schaaf at 17%, and Quan and SF State professor Joe Tuman tied for third at 15%. The Chronicle is reporting that final ballot counts may not happen for a few days, even though they now have the ability to do election night tabulations tonight. In 2010, tabulating the results of the ranked choice vote took the rest of the week to complete. Members of Save Oakland Sports and supporters of Coliseum City have thrown their weight behind Quan, while going against Kaplan, who helped broker the A’s lease extension. Kaplan hasn’t officially stood behind any one concept, though it’s a logical progression to think that she might support a Lew Wolff-offered, A’s-oriented redevelopment plan for the Coliseum. Kaplan had received campaign contributions from Wolff, but chose to return them after questions about impropriety arose. Schaaf and Tuman have been highly critical of the City and the JPA throughout the campaign season, but haven’t offered much in the way of solutions for keeping the pro teams in town. Port commissioner Bryan Parker has remained the most vocal supporter of Howard Terminal for the A’s.

If Quan loses, it’s unclear what happens to Coliseum City. The CEQA/EIR process will continue at least through the 90-day deadline set last month. Kaplan, who had previously considered the Coliseum site the best future place for Oakland sports, remains on the JPA board and could pivot as a “savior” of the plan if she wins. If she doesn’t win she’ll remain in her at-large council seat and on the JPA board. Schaaf is vacating her District 4 seat, so like Quan, if she loses she’ll be out of elected office in Oakland.

As results come in they’ll be posted here. Look for a followup post discussing impacts later tonight or tomorrow.

San Jose also has a mayoral race, though it is more traditional than Oakland’s RCV. The primary was held in June, and as expected the top two candidates were current council member Sam Liccardo and Santa Clara County Supervisor Dave Cortese. Liccardo is being held up as the successor to Chuck Reed and is expected to carry on Reed’s pro-business policies if elected. Cortese, who was also a council member a decade ago, enjoys a great deal of support from labor and is considered the anti-Reed candidate. Both hold differing views on the baseball-to-San Jose effort. Liccardo prefers to continue Reed’s legal challenge of MLB, whereas Cortese has put forth a more conciliatory approach towards baseball. Both are proponents of bringing the A’s to San Jose.

Alameda County is set to vote on Measure BB, the 0.5%, 30-year sales tax hike for transportation projects. The tax would fund $7.785 billion in new projects, from more than $2 billion in largely deferred street maintenance to a Livermore BART extension ($400 million) to Bus Rapid Transit in Oakland ($35 million) to $284 million in improvements to I-880. Also in the package is $40 million for Coliseum City, money that would expand and better integrate the transit hub at the Coliseum BART station. This money is considered key to the success of Coliseum City, since additional privately financed development would be catalyzed by the creation of such a transit center. Two years ago a similar measure, Measure B1, barely missed the two-thirds majority needed for passage. Supporters of BB are vowing not to let such a defeat happen again by throwing greater campaign resources and garnering broader support for the measure. In 2012, Coliseum City basically had to punt while it waited for the next election, effectively delaying planning for nearly two years. With so much uncertainty surrounding Coliseum City’s prospects, another defeat could mean a very big nail in its coffin.

Finally, the City of San Jose’s City Council will vote today on the land option extension on the Diridon ballpark site for the A’s. The option, which is only for part of the fully assembled site, would run at least four years and up to seven at the A’s discretion. The cost of the option is $100,000 for the first four years, with additional years at $25,000. If the A’s exercise the option, they would pay $7 million for those 5 acres, and would have to buy the rest privately. No transaction can happen unless MLB approves a move to San Jose, which it has not done to date.

Watch the top of this post for updates as they occur.