A wise person would’ve turned off the lights and gone to sleep early, waiting to let the election news wash over them until the following morning. Not this guy. As the various county registrars were plagued by reporting delays traced back to a vendor in Florida (that’s your first clue right there), election observers sat at their computers, thumbs properly inserted.

Eventually we got our results. Though not certified, we have a pretty good sense where everything’s leading:

Last week Schaaf did an interview with Athletics Nation in which she discussed current efforts to keep the A’s and other teams in town, as well as her own ideas on doing things differently. She said many of the right things about the City working with greater transparency. She criticized certain aspects of the Coliseum City plan, such as the fanciful replacement arena for the Warriors (who are working on their own arena in SF). Fans of the A’s and/or Raiders will definitely seize upon this:

AN: Do you see keeping the A’s and Raiders as mutually exclusive? What are some of the challenges that go along with keeping both teams in the city?

Schaaf: There is enough room for both teams, and my clear priority is keeping both teams. But from an economic point of view, the A’s have a larger economic benefit for Oakland that should always be kept in mind. They play more than 80 games a year, compared to 10. But I just want to be clear, I’m a very proud Oakland native; my parents were season-ticket holders for both the A’s and the Raiders throughout my life.

If Schaaf is going to work via a straight economic comparison of the two sports, there’s little doubt that the regular season of baseball is far more impactful than a football season. Football’s big payoff was to come via a Super Bowl, though that’s perhaps more of a pipe dream than Coliseum City itself. If Schaaf moves towards abandoning visions of a Super Bowl or retractable roof stadium, it would lead to much more productive discussions between the City and the Raiders. The team and the NFL don’t particularly care about Oakland’s Super Bowl fantasies, and the added cost ($200-300 million at today’s rates) makes an already difficult project even more prohibitive.

Schaaf also led off by saying there’s enough room for both teams, a common refrain from many candidates during the campaign. The problem is not a matter of physical room, it’s whether or not the assembled parcels and other resources can properly pay for the bulk of two stadia. Later on in the interview she emphasizes that the venue(s) will be built with someone else’s money, which is fine as long as someone else can figure out a way to make it pay for itself and turn a profit to boot.

For now Coliseum City remains lame duck mayor Jean Quan’s baby, one covered with the stench of desperation and imminent failure. Schaaf won’t be sworn in until January, which will leave probably one week for her to determine in concert with a new city council how to proceed. She can choose to carry on Quan’s work as Quan conceives the project, leave certain processes going (EIR) while regrouping to think up another strategy, or abandon the project altogether to come up with a completely different plan. How Schaaf proceeds will largely dictate how the A’s and Raiders act, since both teams are waiting for each other to vacate. Complicating matters is the NFL’s activity, which includes a special meeting of its stadium and finance committees to further plan potential Los Angeles relocation(s). In February the relocation window officially opens, which could allow the Rams and/or Raiders to apply to move. If that happens, it’s expected that the NFL will have the procedure in place for relocation candidates to move forward.

If the Raiders leave Oakland only one month into Schaaf’s tenure, her legacy won’t be defined by it. She has worked just about everywhere in Oakland government except as part of the JPA or with the JPA. She has been a sitting council member, sure, but that’s much different from working deals the way Rebecca Kaplan did recently or Schaaf’s old boss Ignacio De La Fuente did previously as members of both the City Council and the JPA. If Schaaf allows both the A’s and Raiders to leave with the Warriors already one foot out the door – now that could be terribly damaging to her. Quan has been scrambling to keep all three teams without a cohesive plan. Schaaf doesn’t want to repeat that. The Raiders leaving would allow Schaaf to devote resources to the A’s, an idea the JPA is already on board with. If the Raiders decide to stay in Oakland and partner with Coliseum City everything remains status quo, though Schaaf will also have the new task of negotiating a short-term lease with Mark Davis.

If the Raiders choose to nix LA and work on a new stadium in Oakland, Schaaf will have to decide if it makes sense to devote more resources towards an A’s ballpark. She expressed support for Howard Terminal, yet the A’s lease and stance leave the site out of the picture. Perhaps Schaaf could work with Doug Boxer and Don Knauss to better present a plan to pay for the ballpark at HT while smoothing over the bad relationship between Quan and Lew Wolff – it is a new regime, right? However, that may be a bridge too far for a site that neither Wolff nor MLB supports. Building a stadium in California is hard. If Schaaf can guide her city towards the realization that they’ll be more productive by putting more wood behind fewer arrows, they stand a better chance at turning that dream of a new stadium into a reality. Schaaf will have to remember one guiding principle: If she’s going to plan for a stadium with someone else’s money, chances are that someone else will have a lot more say about how that stadium gets built than a publicly-built stadium. 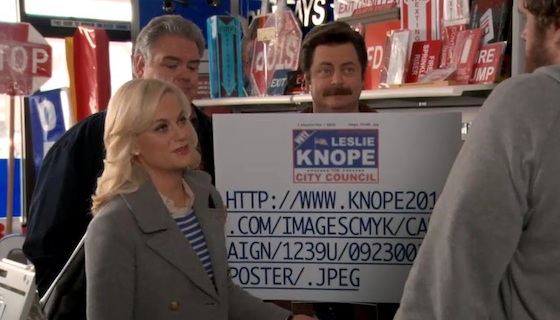 P.S. – One other thing. Without knowing that much about Schaaf’s work in her district, all the talk about her work ethic and positive attitude reminds me of fictional city bureaucrat Leslie Knope. Is that a reasonable comparison? Oakland could use Leslie Knope’s kind of determination. Maybe we’ll be able to see that now that the craziness of the campaign is over.