After yesterday’s games, the 49ers are 3-3 at their new home. The Cowboys are 3-4 at JerryWorld this season. The Jets and Giants are each 2-4 in the swamp, though granted both teams are terrible. Much has been said and written about how Levi’s, MetLife, and AT&T Stadium lack the kind of 12th man atmosphere considered a major part of home field advantage. Why is this? Jerry Jones gave a partial explanation in an interview with Colin Cowherd on Wednesday.

COWHERD: (AT&T Stadium has) become such a national attraction, that there’s been a debate about whether road fans are taking over the stadium. Are you concerned about that?

JONES: No I’m not. We had that wonderful game against the Giants… boy there were a ton of Cowboy fans at that thing. We do know we’ve got a lot of support. Other teams have the same issue, in that visiting teams can buy these tickets… Anyone can pick up a ticket. Our tickets have gone as high as 4 times face value for people that want to travel. And one of the reasons they give is, ‘We just wanted to use this game and come see the stadium.’ That’s part of the price we’re paying for that kind of interest.

Now don’t get me wrong, I want every edge we can have to win a football game. On the other hand, it’s a lot of pride that I have and we have as an organization to have that kind of interest in our stadium. We did overdo, I say overdo I mean in a good way. If you’re as passionate about this stuff as I am… they oughta pass a law against it. We just emptied our bucket. 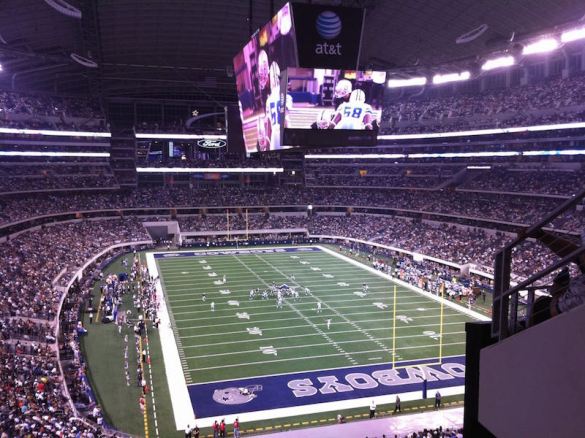 The tendency to overbuild, as is this case with the newest three (aforementioned) stadia, has made the venue as much the attraction as the game. That should fade over time, as this kind of interest in football stadia – as opposed to ballparks – is a relatively new phenomenon. Football stadia are typically seen as utilitarian affairs, and while some recent iterations have become flashy, typically there aren’t scenic vistas or idiosyncracies to appeal to general football fans the same way ballparks do. Cowboys Stadium is the first truly palatial venue in the NFL, while Levi’s Stadium is the only new, swanky venue in California. If you’re a fan and you can spend a few hundred or a thousand dollars on a weekend in San Francisco (cough*Santa Clara*cough) or not snowy Dallas, it’s not a bad weekend in the least.

A few teams have a large enough national fanbase that they can be expected to travel well, namely the Cowboys, Steelers, and Packers. Big markets usually have good representation on the road too. So while the media noted the number of 49er fans in Arlington for Week 1, they also mentioned the invasion of Cowboys fans in New Jersey last weekend.

If you have a 10-year seat license to go with your seats, chances are you’re going to plan your attendance with care. That may mean attending every game as a die-hard, or selectively selling seats on a per-game basis. As internet-based secondary market resellers have gained popularity over the past decade, the process of buying and reselling tickets has become practically frictionless. And if you play your cards right, you can earn a decent amount of your money back. 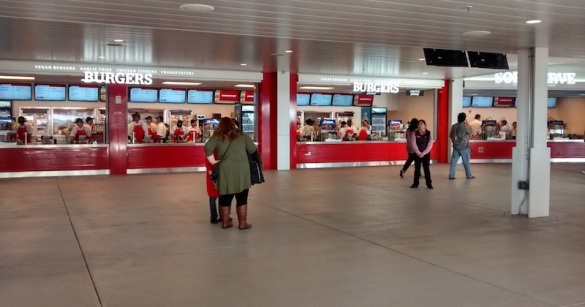 A big concourse is good for accommodating fans in the concession lines. It also serves to take fans further away from the action.

Then there are traditionalist types. I know a Bears fan in Chicago who trades his annual Packers game seats at Soldier Field with a friend in Wisconsin, so that he can attend an away rematch at always-sold out Lambeau Field. As fans become more mobile and more empowered to get tickets away from normal home schedule, this phenomenon will continue to grow. Some factors such as ticket scarcity or lower capacity can help reduce the impact of road invasions. But disaffected fans have more options now, so they can be expected to exercise those options. Jones gets that.

If I’m Mark Davis, I fight the urge to make a stadium opulent, whether in Oakland or LA. Focus on the basics, spend money where it should be spent (locker rooms, suite/club level) and otherwise focus on fan atmosphere, not amenities. Bring fans as close to the action as possible. Wherever the Raiders go, if they can’t ably recreate the Black Hole or recapture much of the Coliseum’s intimacy, they’ve already lost. It is possible to make a stadium too good, at least in the short term. Every team in every sport can learn the lessons the 49ers, Cowboys, and the New York teams are learning.

When planning a football stadium, the following criteria should be considered:

None of these considerations will change the secondary ticket market in any appreciable way, but if there are incentives to keep fans cheering in their seats for every game, every effort should be made to work towards that goal.