Alameda County Supervisor Nate Miley wrote an op-ed in the Trib on Monday, imploring the City and County to consider multiple avenues towards getting the Coliseum complex in the best position to retain the Raiders and A’s. One of the avenues Miley pushes is retrofit. Or renovation.

Yes, renovation. Now let’s be clear on the idea’s prospects. For baseball it’s a nonstarter because of the foul territory, sightlines, and numerous other reasons, so you can stop dreaming about a Bash Brothers-era Coliseum as a possibility. Instead, Miley wants to renovate the stadium for the Raiders, which would leave land available for the A’s to build a new ballpark. The rationale, Miley notes, is that the funding gap that looms over the project would be significantly reduced if a less costly renovation project were undertaken instead of a whole new stadium whose price tag approaches $900 million – for only 56,000 seats. Renovation would cost around $500 million, a figure I’ve touted here and there. The Raiders and the NFL apparently have no interest in renovation, but in some cases they have signed off on improvements projects like Soldier Field, Lambeau Field, Ralph Wilson Stadium in Buffalo, and most recently Sun Life Stadium in Miami – all cases in which the market was hostile towards subsidizing a new stadium.

I have advocated for this solution for years, mostly because the Coliseum works best going forward as a football venue. Mt. Davis may be ugly as sin, but its bones are good and it would require only a relative handful of improvements to get it up to 2016 status. For instance:

You’d end up with around 10,000 seats on the east side including 60 suites and 3,000 club seats. That leaves another 45,000 seats, 20-40 suites, and around 2,000 additional club seats (inclusive of total capacity) to account for. Getting to a $500 million project is doable, as long as you aren’t trying to pile on the square footage. Keep most of the structure fairly basic and concentrate on keeping the amenities in a single, focused area.

Early stages of construction at the Coliseum in 1965

See how there are man made hills in the picture above? There’s no square footage in those hills, no electrical, plumbing, or HVAC. That’s how stadia were kept relatively cheap. New stadia are all about building out as much of the venue as possible, so much that modern football stadia have twice as much square footage as their predecessors. Mark Davis has said on multiple occasions that he doesn’t need a stadium as fancy as Levi’s or AT&T Stadium, so he should be obliged. 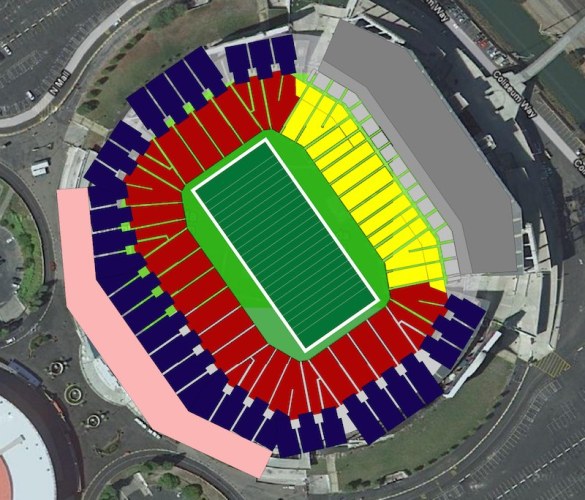 As the east side gets a makeover, the original bowl is torn down. The old berm is reshaped for the new lower seating bowl at the end zones. The west sideline has space underneath the lower bowl for locker rooms, maintenance, and storage. That leads to the new seating.

The key to this layout is that there’s only one concourse in the new bowl. That’s a bit of a nod to Levi’s, where the lower concourse is vast. The second deck is not really cantilevered over the first deck. Behind the second deck is a two-level suite and press addition. Total capacity is 55,000 seats and could have 4,000 more seats by adding 6 rows to the upper deck.

Stanford Stadium and the Citrus Bowl used similar approaches, and while those builds weren’t as complicated as this, the same principles apply. Done aggressively, this shouldn’t take more than 18-24 months to complete. Obviously there would be questions about where the Raiders would play temporarily and the A’s displacement, but those are for another post. Want a renovation? Here’s an example, if Mark Davis is actually interested in a solution.