They came, they saw, they empathized.

As part of NFL’s relocation evaluation process, the league is required to hold public meetings in the cities from where incumbent teams are threatening to move. Despite the fact none of the three teams considered part this discussion – Raiders, Chargers, Rams  – have actually filed a request for relocation (they aren’t allowed until January), the NFL decided to hold these meetings well in advance of all three teams’ expected applications to leave.

That left the NFL to announce three weeks ago that they would send a team of executives, fronted by Eric Grubman, to the threatened cities to hear from fans and discuss each city’s situation. Grubman was accompanied at each stop by fellow VPs Chris Hardart and Cynthia Hogan, plus league attorney Jay Bauman. All four sat in directors chairs on a blacked out stage, while fans sat in the lower auditorium levels, waiting to speak at podiums placed in each aisle. Politicians and team owners, even Raiders owner Mark Davis, sat among the riffraff.

St. Louis and San Diego share a common problem, in that their respective teams have not participated at all in recent stadium development efforts at home. Local sentiment reflected that, with fans lustily booing the Rams’ Kevin Demoff and the Chargers’ Marc Fabiani, both of whom have openly pooh-poohed those 11th-hour attempts in favor of stadium projects in the LA area. Feeling powerless, fans in both cities sang a common refrain: bring Stan Kroenke and Dean Spanos back to the table so that we can make stadium deals in STL/SD. And as each story about generational bonding or heartbreak was heard, the more it sounded like groveling. That’s what the owners and the NFL have reduced fans to doing: begging to keep the team in town. It’s a common story, at least in North American pro sports, and this won’t be the last time it happens. Some guy within NFL Films will be tasked with editing the combined nine hours of testimony down to probably 30 minutes that will be consumed by the collective 32 NFL owners at a future league meeting. I don’t envy that person one bit.

Grubman, who made most of the responses to fan questions, reminded me a lot of Ryan Bingham, the slick, well-compensated corporate hatchet man from the Walter Kirn novel Up in the Air. The film adaptation in 2009 starred George Clooney as Bingham, a man who lived a thoroughly hollow personal existence while obsessing over a quest to reach one ten million frequent flyer miles. That’s not to say that Grubman’s like Bingham personally. From all appearances Grubman is a family man. He even joked in Oakland that he was missing his wedding anniversary for that night’s hearing. Nevertheless, Grubman’s ability to empathize with every fan and speaker was amazing to watch. Veterans and government employees received laudatory Thank you for your service salutations. Several times he prefaced a remark with, I know what it’s like to be a fan. It was as breathtaking and sickening a performance as I’ve ever seen – including Clooney’s, which netted him an Oscar nomination. Then again, Grubman apparently gets paid at least $4.4 million a year as an executive VP in the NFL. Like Bingham with his delegating boss, Grubman is compensated well to, among other responsibilities, take Roger Goodell’s arrows.

Davis has also been an active participant in the joint stadium effort in Carson, though Raider fans and city officials have given him some credit for participating to a degree with the now shitcanned Coliseum City project. He received a largely warm reception from the roughly 400 Raiders fans at the Paramount Theatre in Oakland. He made some opening remarks, stating that the Raiders wouldn’t answer questions at the session. Couple that with Grubman’s admission that the NFL had no solutions for Oakland, and you might think that the whole thing was a charade. You would be mostly right.

When challenged about the Raiders paying only $300 million (plus the NFL’s $200 million in G4 money) towards a $900 million stadium, Davis responded.

Davis: “I don’t know what else to show you… We’ve been offering everything we can… It can be done in Oakland if everybody pulls together.”

That’s basically what Davis has been saying for the last six months. He’s not willing to stake additional stadium revenues to make an Oakland stadium deal happen, as the 49ers did with Levi’s Stadium. Hard selling with ultra-expensive seat licenses and ticket prices works as long as the team is good, but as we’ve seen so far in the 49ers’ tenure in Santa Clara, fans will ditch the team in droves if the team isn’t competitive. Even the Raiders had trouble selling out until the upper deck of Mt. Davis was tapped off. No one wants to be left with the check at the end of the night, whether it’s Davis and his ownership partners, the City of Oakland and Alameda County, or stadium financiers. This is not a trivial amount of money – $400 million – that we’re talking about. Fans need to stop treating this issue like it is.

Yet there were calls for crowdfunding to help bridge the funding gap. Before anyone creates a Raiders stadium Kickstarter, you all should know that there already exists a sort of primitive form of stadium crowdfunding. It’s called a brick campaign. Fans buy custom engraved bricks that end up in a plaza or on a wall at the stadium. Even successful brick campaigns won’t pull in more than around $25 million, a relative pittance compared to the total project cost. The Green Bay Packers held a stock sale in 2011 to finance renovations at Lambeau Field. That effort raised $64 million, from sales of 280,000 shares costing $250 each. If the NFL allowed Raiders fans to make a similar effort (even though the Raiders are not a publicly-owned corporation), the effort would have to sell around 1.8 million shares at $250 apiece to raise $400 million (after overhead and fees). That’s simply an infeasible goal for any team, not just the Raiders. 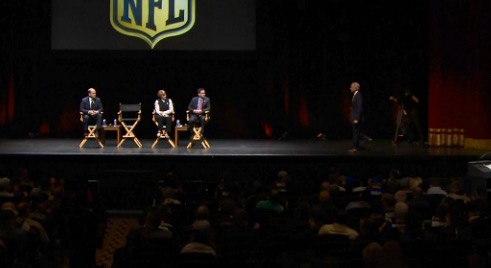 Last but not least, Oakland Mayor Libby Schaaf was in the house. Schaaf thanked the NFL and fans for showing up. Yesterday, Matier and Ross led off their column with a note about yet another consultant being brought in to put together a package that might sway the Raiders and the NFL. That package could provide infrastructure and potential tax breaks for a stadium deal. While that might sound promising, it’s really just formalizing what Oakland’s willing to offer, which is limited help and no public money. That won’t work for the NFL because the league considers infrastructure and free land little more than table stakes. St. Louis and San Diego are providing real public money towards construction, just as every previous NFL stadium project has in the past. If public money isn’t on the table, there’s little reason to expect the NFL to respond positively. Grubman explained that every stadium deal has three financing parts: the team, the league, and the local piece. Historically that local piece has consisted of public loans or bonds. The NFL has already rejected the Coliseum City plan. The NFL has its script and it’s sticking to it. Oakland is no special case here. If Oakland really wants to keep the Raiders, they need to put some skin in the game. Given what happened with the Mt. Davis debacle, that skin may end up being Oakland’s scalp. Schaaf is right to be cautious and not desperate as her counterparts have been. How do those positions get reconciled? Someone will have to give in, and the NFL has not shown a track record of making concessions.

79 thoughts on “NFL Town Halls: Three days of talking around a problem”