The Raiders agreed in principle to a one-year lease at the Coliseum, with the potential for extensions in 2017 and 2018. Specific terms were not revealed at today’s press conference, but the main reveals are that the Raiders will pay more in rent than they had in the most recent lease, and that Larry MacNeil, former 49ers CFO, was hired to work with the City/County/JPA on a new stadium deal. Davis touted MacNeil’s experience in developing Levi’s Stadium.

Towards the end of the press conference, Davis challenged A’s ownership to “commit to Oakland”:

Right now there’s 120 acres. There’s parking, there’s an arena. We like the gameday experience of tailgating on that parking lot. We don’t want to give that up. Now, there’s two teams that play in that Coliseum. One’s the Oakland A’s, one’s the Oakland Raiders. People have not listened when I said I do not mind if there are two stadiums on that site. The A’s stadium would take about 12 acres, the Raiders’ stadium would take about 15-17 acres. That’s fine with me, but I do not want to give up the parking.

If, in fact, the A’s do want to stay in the Coliseum site, they need to commit A.S.A.P. so that we can go ahead and design and take down the Coliseum, provide all the infrastructure necessary to build two new stadiums in Oakland, and two teams will then come back in and play in two new stadiums. What I do not want to do is build a football stadium in the corner of the parking lot while the Coliseum is still standing, and then once we have a brand new stadium we begin to tear down – or build a new baseball stadium – and then tear down the Coliseum, disrupting the ingress, egress, and parking, tailgating experience for Raider fans on gameday. What it’s going to take is for the A’s to make a commitment to Oakland and tell the people what they want to do.” 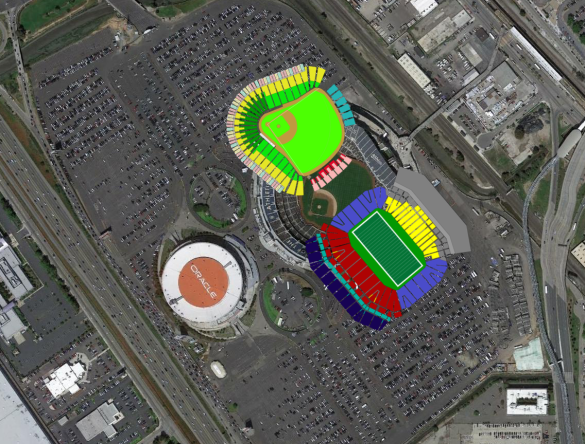 Two new venues on a slightly larger footprint than the original

The A’s response did not waver from their ongoing evaluation process:

Let’s, for a moment, follow Davis’s argument all the way through to its hypothetical end. He is right that he’s been consistent about this. For nearly two years he has wanted the Coliseum torn down immediately, to be replaced by either a football stadium on the original footprint, or two venues next to each other. As you can see from my drawing above, it can be done while taking up only slightly more land than the original Coliseum did. There would even be some advantages in that a grand plaza could be built between the two stadia, leading to the arena.

But is it realistic? Let’s consider how this would progress. Assuming that Lew Wolff and John Fisher could be convinced to go along with this plan, the Coliseum would be torn down and the site graded shortly after the end of the Raiders’ 2017 season – let’s call it a year from now, February 2017. From that point new infrastructure would have to be put in place, followed by actual construction. If they started by the summer, the A’s couldn’t move into their new home until the 2020 season because of a very compressed schedule for an early 2019 opening. The Raiders could potentially open in 2019, but consider that 2019 is the projected opening for the Rams’ stadium in Inglewood – and that site is ready to go, demo already completed. For all intents and purposes, both the Raiders and A’s would be out of Oakland for three years – the A’s probably to AT&T Park, the Raiders to Levi’s or somewhere else. Throughout all of this, Davis would have final say on any development on the 120-acre Coliseum site.

Is there anything in Davis’s history or actions that makes anyone believe Davis is the person to make this happen? He has no experience in development or in the kinds of complex legal and business arrangement requires. His sudden ability to rattle off catchphrases like “opportunity cost” like he just rolled out of a basic microeconomics class isn’t impressing anyone. MacNeil is a good hire, but his presence alone isn’t going to convince investors to subsidize a stadium. And Davis’s desire to stick with ingress/egress/parking as his most important issues in Oakland is downright bizarre. Preserving parking has some nobility to it and is a good way to pander to Raiders fans, especially when compared to the mess that is Levi’s Stadium parking. That argument can’t possibly impress the other 31 owners, who have demonstrated repeatedly that they want deals that improve revenue for teams and for the league as a whole. Parking is worth maybe $4 million a year in revenue. Davis has somehow neglected to talk about revenue as a rationale as every other owner seeking a new stadium has done. Raiders ticket prices will be frozen again for 2016, keeping prices and local revenues essentially flat for the several years since he took the reins. And Mt. Davis will remained tarped to boot. If the Raiders’ revenue position is going to improve, the Raiders will have to charge much higher prices at the new stadium, and in the intervening years they’ll have to test out those higher prices on fans at the Coliseum, the same way the Warriors are doing now in preparation for their new arena. Without a major revenue boost, there isn’t even a business case for building a new stadium, even a small one. The $500 million (+$100 million gift) Davis frequently talks about comes from stadium revenues. If he can’t hit the targets in those loan programs he’ll have hell to pay from the other teams’ owners and his own investment group, in large part because he’ll end up bleeding his golden goose (the NFL’s TV contracts) to pay everything off. And we still don’t know how the $300 million funding gap would be filled.

Historically, none of the old multipurpose stadia have been redeveloped in the manner Davis is suggesting. There generally was a sequence with one tenant staying in the old building while another was built next door, then the old one was demolished and replaced. That was a successful model in Pittsburgh, Cincinnati, and Philadelphia. While the Bay Area has the luxury of high quality venues that could host the two Oakland teams in a pinch, you’re also allowing them to take both feet out the door for three years. Either team (or both) could back out of any stadium deal at any time (really, please try to force a team to build a stadium when the city is providing no money for it). The only leverage Oakland has is that the Coliseum still exists and remains functional, allowing MLB and the NFL to maintain its inertia regarding both teams. Without the Coliseum, Oakland is practically a non-entity for pro sports. I’m not sure if the politicians gathered around Davis at the presser believe in Davis’s vision. The presser certainly wasn’t the venue to argue against Davis. The theme of the event was unity, even though all they were talking about was a short lease extension. Well, unless we start to see hard numbers and actual advantages for the A’s and Raiders besides preserving parking, we’re a long way from actual unity.

P.S. – Davis is trying to play some sort of PR game by claiming that the Raiders are “hamstrung” by the A’s lease. That’s only true if the only way to build a stadium is to do it Davis’s way. Otherwise the A’s lease can be terminated with two years’ notice. That’s it. It’s not unreasonable for the A’s to ask for some time to get their affairs in order. Unless you’re Tommy Boy, I guess.