For the last several years the Cubs have adorned the façade of Wrigley Field with vinyl signs, as I witnessed firsthand in 2013. While they were bold and colorful, they distracted from the structure itself. 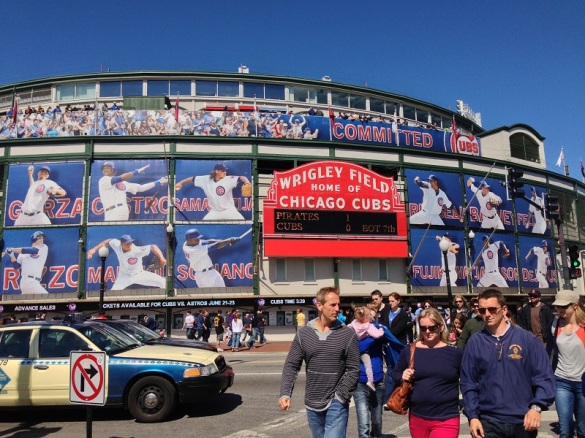 Back then I wrote about the contrast:

Wrigley famously has very little façade. Behind home plate is the light gray concrete structure accented by green and the distinctive red marquee. It’s not brick or sandstone, and there’s little to write home about. At some point recently the Cubs decided to have huge vinyl signs of the players cover up much of the concrete, as many newer parks have done. As much as I appreciate the blast of color, I miss the old humble concrete. Along the first and third baselines are chain link fences, so the back of each deck is exposed to the street it faces.

As part of Wrigley’s multiyear renovation project, the vinyl and chain link have been torn away, replaced with elements that open up the space and hark back to Wrigley’s earlier pre-war state.

The terra cotta facade, better seen in the Chicago Tribune’s article on the makeover, is somewhat more controversial than the rest, since the material is not exactly in keeping with steel ballpark construction. However, it is a throwback to Wrigley during the 30’s. At scale, it’s applied only to provide a warm accent that wouldn’t otherwise exist, and certainly would be less effective with mere paint or another metallic surface. It makes Wrigley even more approachable, if that was even possible. Wrigley’s famed red marquee was reinstalled only two days ago, and it remains as hot as ever. I look forward to going back sometime soon, even just to admire the exterior.

P.S. – Note the amount of roster turnover signified by the players on the vinyl signs.