Third? You ask. The Ballpark in Arlington was the first true ballpark in Texas. Arlington Stadium was an overstuffed minor league park not worthy of full MLB bonafides, right?

Arlington Stadium was an overstuffed minor league park, true. But it held up for 22 years in an era where ballparks were not as obscenely specced as they are today. Arlington Stadium was redone during the time of the cookie cutter stadia. It was a round bowl. A bare bones facility. It had no roof. There were no cantilevered decks, and the press box attracted the North Texas winds like a vacuum. It was odd and disproportional, yet I had a slight affinity for it when I saw the A’s play road games there. Perhaps that’s because I never had a chance watch a summer game there. 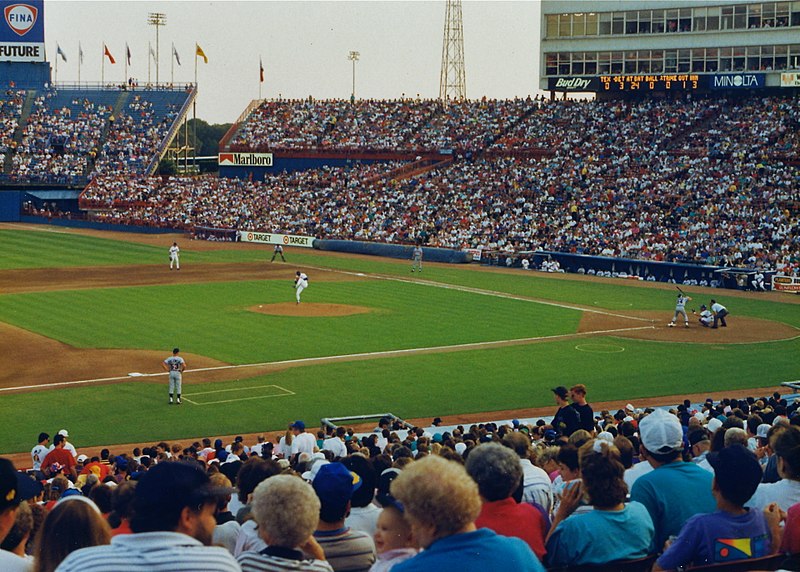 In 1994 the Stadium was replaced by The Ballpark in Arlington (review), an early entrant in the new era of retro-classical ballparks. TBiA (now Globe Life Park) was built to hold 50,000 fans, a bunch of offices in center field, and the new standard of club seats and suites. What TBiA lacked was any kind of roof with an air conditioning system. A fixed roof was not really in the cards, and the only retractable roof at the time was at the hulking SkyDome, far too expensive for the $191 million budget. So to compensate, the Rangers built ultra large covered concourses with an open facade. It felt airy, and felt pretty good in April and sometimes September. July and August were punishingly brutal thanks to the humidity. George W. Bush, who was looking for a trophy to propel his burgeoning political career, didn’t have six years to wait until the retractable technology evolved to the point of affordability, as it did for the Astros. So TBiA was built, Dubya became governor, and the Rangers stayed in Arlington.

Recently, Rangers ownership, now changed twice, started looking for a more technologically modern home, citing the need for a retractable dome thanks to the heat and humidity problems. A dome over the top of TBiA was considered problematic because of the lack of a support structure (and infrastructure) to carry the roof’s load. Prominent Dallas interests quietly started talking up a ballpark within the city, perhaps close to American Airlines Center. Arlington pulled the rug out from Dallas by working with the Rangers on an eventual replacement for TBiA, even though eight years remained on the lease.

What will be the price tag for improved climate control? A cool $1 billion, half of it charged to the citizens of Arlington via extensions of existing sales/hotel/car rental tax hikes. Arlington pols feel confident about the plan because they may pay off the debt at the Cowboys’ AT&T Stadium 10 years early. Sure, they’ll outfit the park with more restaurants, bars, club levels, different types of suite boxes, and custom bat/bear/doohickey booths. And there will be a huge fan plaza with retail and a hotel, finally giving the immediate area something else walkable from the park. That mini ballpark village will be called Texas Live!, located kitty corner from the current ballpark to the southwest.

There are a few sobering takeaways from this whole exercise.

Sometimes it feels like the world is passing the A’s by. This is no more clearly evident than in the stadium game. At least the Rays are here to keep us company.

70 thoughts on “Rangers and Arlington Working On Third Ballpark”