You remember what it used to look like. I shouldn’t even post a picture of the old bleachers, but I will just in case you don’t know. 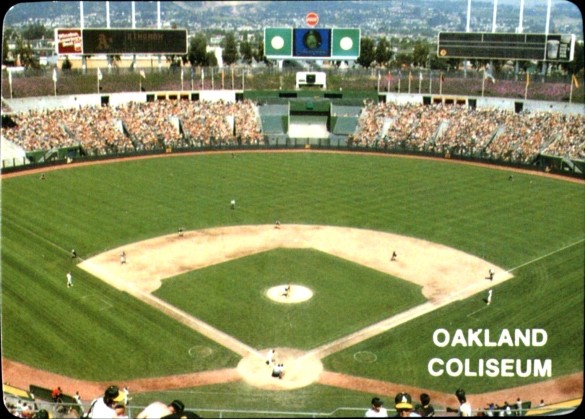 I won’t post a picture of Mount Davis because, well, it’s still there. I am at Chase Field tonight, so I’ll post another picture from an outfield seat.

In an effort to expand the availability of wheelchair-accessible seats around Chase Field, the Dbacks placed a fence in front of the right field wall along with one row of wheelchair positions and companion seats along the fence. It’s a cool albeit obstructed view of the action with plenty of space to stretch out. It also provides additional seating for the infamous pool via patio tables. The seats are generally not available in advance unless you’re buying a wheelchair space. As is often the case, on game day the seats open up for the general public. The Giants have field-level viewing spots along AT&T Park’s promenade, but they aren’t ticketed and people aren’t supposed to hang around for more than a couple innings.

Going back to the Coliseum, A’s fans know of two kinds of bleachers: the original set that hugged the uniform outfield fence, and the new carved out sections of football seats that start 15 feet above the field. We know what the standard, optimal height is, and we know what a sub-optimal, compromised height and angle is. In the 60’s cookie-cutter area, the outfield bleachers was at best an afterthought, minimal revenue-generator. Prior to that parks like old Comiskey and Tiger Stadium had wraparound second decks that had were mainly as a way to pack as many seats into a small space as possible.

Nowadays outfield seats are yet another revenue machine. Bleacher benches have been mostly supplanted by seats, and the designated bleacher sections have been moved well back of the outfield fence. Bars and party sections now populate the areas by the fence. At Safeco Field the bleachers are suspended well above the bullpens and the lower concourse, which is lined with bars and more expensive seats. And of course, most parks have completed killed the concept of the general admission seat, which allows anyone to sit in whatever bleacher seats are available, first come, first served.

Romantic as we all are for the original Coliseum bleachers, they are going the way of the dodo (remember how the A’s were considering reserved bleachers in 2010?). There should be some bleachers at the new park, but will all be reserved or will some be GA? Should the A’s consider some form of lawn or festival seating in addition to bleachers? San Diego has this, but the lawn is distant from the field.

I’m not privy to the A’s plans or marketing, so I don’t know just how many bleacher seats they plan to sell. 10% of all seats is 3,500-4,000. 20% is roughly 8,000, approaching the number for the recently re-opened upper deck. Putting together the seating mix goes in conjunction with all the other stuff that could be built there, from restaurants to roller coasters to outdoor party suites to a gigantic animatronic Stomper home run feature. Views from the rest of the seating bowl will surely be paramount, so conservation of height may be a major factor. Other than that, this could go in any number of directions. Respond to the poll below, and have your say in the comments or @ reply on Twitter. Have fun with this. It’s our ballpark too.

How would you like the outfield seating at a new A's ballpark to be laid out?

4 thoughts on “Architecting an outfield, bleachers and all”