Fans expressed worry as the A’s didn’t announce who would be broadcast their games over the radio at FanFest. The team was working on something, we were told, and today they unwrapped some new partners.

For traditional, over-the-air radio, the team will partner with KTRB-860 AM for the 2019 season. A decade ago the A’s attempted to buy KTRB to transform the station into a homegrown A’s flagship, but the A’s couldn’t come to terms on a price, estimated to be around $5 million plus necessary transmitter upgrades, so naturally the station became yet another hot talk gabfest. 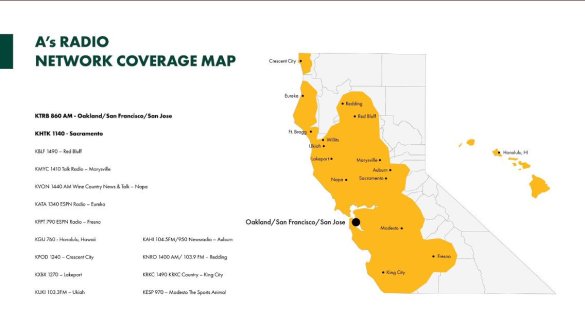 The big news is that the A’s will have streaming for free through a new deal with TuneIn Radio. TuneIn will handle all of streaming within the A’s market, though I’m not sure what defines the A’s market for the purposes of streaming (IP check, perhaps?). The MLB At Bat app continues to offer its Premium version with audio included for $19.99 per season or $2.99 per month, spring training included. Audio is automatically included in the A’s Access season ticket plan and subscriptions to MLB.TV. MLB.TV is sold for $118.99 for all teams’ video telecasts or $91.99 for a single team, blackouts pending, natch.

I’ve had the TuneIn app on my phone for years, even though my use for it has decreased over time. It’s good to see that I’ll be able to use it again. TuneIn has a Premium 30-day free trial for new users (again, A’s games are free). Whether I’ll be able to use it for the Cactus League while the A’s call Mesa home for a month – TBD. Whatever the case, more options are good. TuneIn will also offer an A’s channel that will operate 24/7, which will be nice if you want to check out a late-night/early morning reply of an earlier game, something the Giants enjoyed on KNBR for years. Admittedly, the advent of on-demand replay makes a scheduled rebroadcast largely unnecessary, but it’s still nice to have.

Streaming games tends to lag compared to live action, so it isn’t going to supplant the old pocket transistor radio you would frequently take to the Coliseum. As wireless speeds and the processors in your phones get more powerful that lag will continue to decrease. On the other hand, perennial pre/postgame host Chris Townsend will remain part of the proceedings, as his bookend shows will be expanded. The pregame show is called “A’s Total Access,” which is a branding exercise if I ever heard one.

I’m not sure if the A’s deal with KTRB will go longer than 2019. I suspect that the A’s are using this year as a platform to launch the streaming offering. The A’s launched their team website some 22 years ago.

Ever the innovators, the A’s could oversee the twilight of the radio era. Then again, other clubs will have something to say about that.