Two bills supporting the Howard Terminal ballpark project are now on Governor Gavin Newsom’s desk, thanks to their safe passage through the state legislature. You haven’t heard much static during this part of the process, which is unique to California. CEQA regulations make it tough for big projects like stadia to get to the groundbreaking stage, which has created a new environment where CEQA exemptions are allowed to shorten that process. Despite those efforts, the process remains largely the same.

We’re where those four arrows point on the right, 1/3 of the way up (I added the green arrow)

A lot of the process happens in parallel, especially the items on the left side of the cart. There is a draft version of the EIR that’s scheduled to be released sometime in October. A’s President Dave Kaval gave select media members a tour of the Howard Terminal site earlier in the week where he walked them through much of the rest of the process. The Athletic’s Marcus Thompson documented some of those next steps well, so you should take a look at it. If you can’t see that, I’ll sum it up.

Of course, there are numerous important steps between fall of this year and spring of next year, or spring and winter of next year. As you all know from reading this blog, the devil’s in the details. I didn’t hear much about lobbying efforts from the shipping industry, though they kept up their occasional media assault on the project. I imagine the shippers are lining up their arrows for the draft EIR, which should create its own sort of postseason fireworks. The legislation stuff is the easy part.

About that legislation, Governor Newsom has until October 13 to sign it. That shouldn’t be a big deal, with the only real complication being the presence of other more important bills for Newsom to sign. You see, the biggest achievement was already earned when area legislators chose to write these bills to create exemptions for Howard Terminal. It’s hard to find vocal opposition these days, especially now that the bulk of stadium projects in California are privately financed, which means there are no direct subsidies or tax measures involved in the venues’ construction. If you’re a legislator, are you going to say no to a private business looking to invest and you don’t have to put up anything yourself? Or be the c*ckblocker for some other city?

Well, about that. There will undoubtedly be debate about the infrastructure part of the plan, which is still mostly unsettled and requires fleshing out. For instance, Mayor Libbby Schaaf indicated that she’d be willing to put up to $200 million of the City’s money towards this infrastructure. Some of that will go towards new sidewalks in a part of town that doesn’t have many of those, or new pedestrian or vehicular bridges to go over the train tracks that run next to the site. How much will go towards dealing with the demands of the shipping and trucking companies in West Oakland? And how much of the beautification aspects of the project will be confined to Howard Terminal itself, as opposed to the nearby areas?

Take the picture below. It depicts the ground level of Margaret T. Hance Park, an urban park in Phoenix. 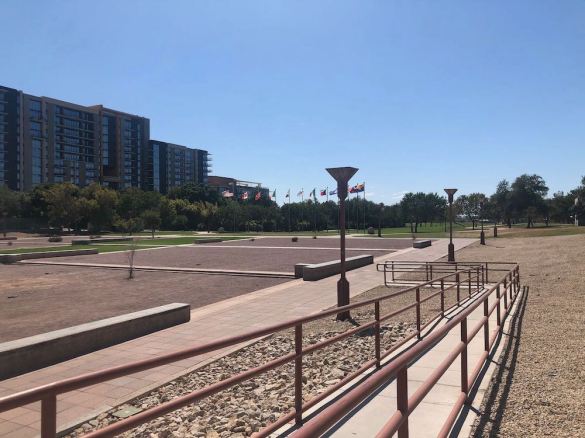 What you don’t see is that underneath it is Interstate 10, which runs right through central Phoenix from east to west. The park itself was built atop a series of bridges and decks to connect downtown Phoenix to midtown and points north over the freeway, which in this area was once called the Deck Park Tunnel. Hard to tell from the photo, right? The park is 32.5 acres in size and is flanked by new apartments and condos, an arts district, and a library. Some of you are probably thinking that this is the approach that should be taken with the tracks along the Embarcadero, or I-980 if/when it’s decommissioned as a freeway. If that happens, it’s many, many steps down the road and will cost billions, so I wouldn’t get too excited about the prospects of either. Still, it’s nice to consider the possibilities.