I have two copies of Paul Goldberger’s recent book Ballpark: Baseball in the American City in my possession. One is a hard copy, the other a Kindle version. The book goes through the history of ballparks, from before baseball was properly organized in the late 19th century through the pre- and post-war periods to the under construction Globe Life Field and the planned Howard Terminal ballpark.

In chapter 7 (“Leaving the City”), Goldberger makes the following observations about Memorial Stadium in Baltimore, built in boom year of 1950:

Memorial functioned reasonably well for baseball despite its football-like appearance. Reportedly football fans in Baltimore believed the stadium’s layout  favored baseball, which further underscores the paradox most devoted of the multi-purpose stadium: it is never ideal for any sport, and the most devoted fans of one sport, frustrated by the facility’s shortcomings, are likely to think that the design favors the needs of another sport over their own.

A couple weeks ago, the Coliseum underwent its final football-to-baseball conversion, marked by numerous comments about how baseball has it better there. This sentiment was echoed most vociferously by former Seahawk and Cal Bear running back Justin Forsett, who said:

If anyone wants to know what it feels like to fall on that dirt in Oakland Coliseum: Go outside right now, sprint as fast as you can in the middle of the street, once you get to full speed jump up as high as you can and belly flop on the pavement. #Facts

The last Raiders game planned at the Coliseum on December 15, followed by the intense construction period that has marked the last two winters in which baseball or fan-related improvements are installed within the stadium bowl. There isn’t much need to change the field, though the rumor of moving the bullpens is still out there. A Monster Jam event will be held in mid-February, followed by the ritual of resodding of the grass at the Coli.

The Coliseum uses stadium technology that mostly dates back to the 60’s and it shows. Whether we’re talking about the low overhangs, the lack of functioning elevators or escalators, or the notches in the lower seating bowl, the Coliseum stands as a mid-century marvel, though it clear isn’t fetishized like an Eichler. The field remains below sea level, plagued by a poor drainage situation (a game during the last homestead was delayed at the start due to standing water). It’s not a field designed to wick away a foot of rain in an hour. It is, at its essence, playable in ideal conditions. And it has held up despite being replaced twice a year, trampled by 300-pound men and construction equipment, even families on fireworks nights or the occasional concert crowd.

Newer stadia with grass fields have done a better job of obscuring the dirt infield with temporary sod. Artificial turf looks more like real grass with each passing generation. Innovation will continue to leave the Coliseum in the dust, and whether the A’s move to Howard Terminal or a new stadium next door, there’s little reason to consider revamping the grass field when it’s doing fine with routine maintenance. It should do even better without the frequent football changeovers, harkening back to the pre-1995 Haas era of baseball prominence. 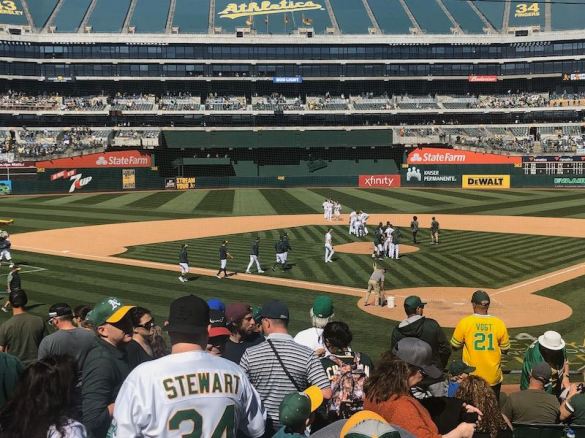 From behind the backstop earlier this season

In hindsight, it makes me wonder about the role of the multi-purpose stadium in American sports history. Goldberger devotes two chapters to the phenomenon, starting with Cleveland Stadium in the 30’s and taking the reader through the cookie cutter era and the last purpose-built multi-purpose stadium, SkyDome/Rogers Centre. Was it a necessary step to accommodate a growing pro sports industry and economy? How much did suburbanization and car culture impact stadium development? Most of these stadia got the wrecking ball and with it were relegated to the dustbin of history. Yet while the old cookie cutters were around, how truly bad were they? The most favorable thing often said about these venues was that they were serviceable. Cities tried to concentrate all of the major sports activity in one place or complex. Kansas City, South Philly, and the Coliseum remain examples. But Kansas City recognized the benefit of separate stadia long ago, after the A’s left for Oakland. Philly decided to ditch the old Vet and build separate football and baseball stadia in the same complex. Pittsburgh followed the same path with Three Rivers, as did Cincinnati with Riverfront.

Yes, there is an impressive list of ballparks built during the 20-year HOK era that are shining examples of bringing baseball back downtown: Camden Yards, Progressive Field, Coors Field, T-Mobile Park, Oracle Park, PNC Park, and Petco Park. Oakland remains thirsty for its own urban transformation, while Kansas City continues to flirt with moving the Royals downtown. Bringing a team downtown is no magic bullet, as the Pirates remain woefully small market and the Reds’ Great American Ball Park is ho-hum at best.

The recent trend of building more ballparks in urban areas was followed by a mini shift towards revisiting suburbanization, as practiced in Arlington and Miami. On that trend’s heels is the neighborhood-ization of the ballpark, which the A’s dabbled in a decade ago. This approach tries to create a great sense of place around a ballpark, while providing a large palette of different types of ancillary development to help pay for the venue itself. Globe Life Field (successor to Globe Life Park) will have an adjacent village. The Angels continue to negotiate development rights to the area surrounding their home in Anaheim. The days of a stadium surrounded by a sea of parking are waning, though this is more prevalent in baseball as opposed to football. Cubs ownership owns much of the real estate surrounding Wrigley Field, and the Giants are soon to start their commercial development on the parking lots to the south of Oracle Park.

While the Rangers will move to a similarly named ballpark next door in a few months, the “old” Globe Life Park will remain a functioning venue. An XFL franchise will start play there next spring. GLP will be reconfigured to house football as such:

Remember that pro sports in Arlington started with an expanded Texas League park named Turnpike Stadium over 50 years ago. Once expanded, Arlington Stadium barely qualified as sufficient for the major leagues. When George W. Bush became Rangers owner in the early 90’s, he helped engineer the deal that resulted in GLP. The City of Arlington’s extremely sports- and business-friendly environment eventually attracted Jerry Jones, who abandoned Texas Stadium in Irving for JerryWorld, within spitting distance of the ballpark. Now that Globe Life Field will open in 2020, there will be three venues mere walking distance from each other, two with retractable roofs (one huge, one medium-sized), the third without a roof but okay for hosting events outside of the summer months. That isn’t so much a complex as series of purpose-built venues built near each other to take advantage of available parking.

Rendering of a Ghost Town

When Coliseum City was unveiled in 2015, I opined that the vision was too ambitious in trying to accommodate the Raiders at the expense of the other tenants. Apparently that wasn’t Raider-friendly enough for Mark Davis, who was unwilling to give up parking acreage for a neighboring ballpark or ancillary development. The Dubs were already looking across the Bay, while the A’s had to regroup after being rejected on San Jose. Still, this concept of a mega-development with three venues and increased year-round activity was sold as the savior, the panacea for Oakland. The Coliseum complex, as shown in the rendering above from last year, has a mostly deconstructed stadium and an arena with a tenant for six weeks per year and limited opportunities to pay to keep the lights on.

Of course, Oakland is not like Arlington in many respects, so it would be foolish to attempt to take the North Texas sports economics model and transplant it into the East Bay. Now the new panacea, as it’s being pitched, is a model that utilizes an industrial site next to a commercial site (Howard Terminal and Jack London Square, respectively) and use the Coliseum to help fund the ballpark. Parts of the Coliseum would be filled in by a mix of uses, effectively throwing East Oakland a bone. Alameda County negotiated with the A’a a buyout of their share of the complex, while the City of Oakland remains a holdout.

There are few remaining sports complexes in use. The Coliseum is one though it only has one tenant left once the Raiders leave. The 50’s and 60’s were the time for the baby boom, suburban expansion, the Interstate highway system, the socioeconomic ills all of that would cause in later decades, and sports complexes. Some examples:

After teams left the Astrodome, Kingdome, Metrodome, and the cookie cutters for purpose-built facilities, the few multi-purpose stadia left were iconic of an era that time passed by. Some of the goals were ambitious: large capacities and even larger adjacent parking lots, downtown locations in many cases, and updated technology such as electronic scoreboards and luxury suites. Time marches on, though. Even as 50,000-plus fill the Coliseum on Wednesday evening, there will be constant reminders of how past its prime the venue is. Is there room for a multi-purpose stadium in the future? Well, sort of. There is a coming glut of ultradomes, NFL stadia designed to host a rotating college football playoff or bowl game, the Super Bowl, a college basketball tournament regional or final, and perhaps a premier soccer exhibition or boxing/wrestling every so often. What was once a 50/50 football/baseball split is now closer to 90/10. Bowl game? Sure. No housemates that play baseball, though. Or basketball or hockey. Fans want venues right-sized for their sports teams. Or at least the team owners want those venues, no sharing.

All in all, the Coliseum complex saw over 50 years of use and 10 world championships during that time. While it’s not yet time to send in the demolition crews, it’s not a bad moment to assess the complex’s impact on Oakland, the East Bay, and the Bay Area as a whole. More than anything, the Coliseum served its purpose. It did so a little brash with some bash. It put Oakland on the map. It’s still mostly efficient to visit, convenient, and centrally located. It is not by any means sexy. The Coliseum attracted, but did not keep, several pro sports franchises. Better to have loved and lost, I suppose.