My usual route to the gym takes me through Papago Park, the former spring training home of the A’s. Every time I drive down 64th Street/Galvin Parkway, I see this: 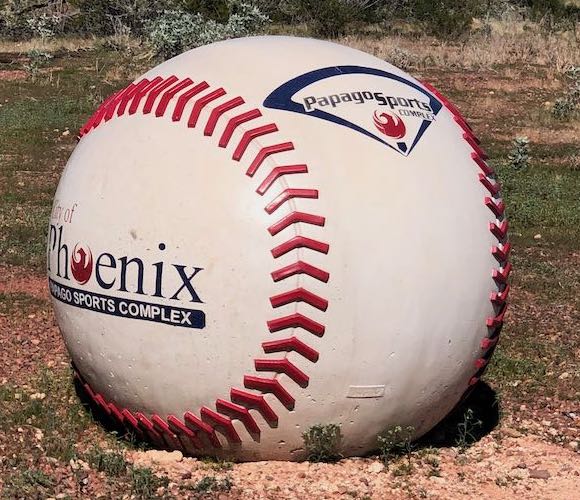 The old training fields are visible from the street, with Phoenix Municipal Stadium (now home to ASU) situated downhill at the south end of the park. The baseball sculpture is a friendly reminder of Papago’s sports history, and though the A’s are now in Mesa, it’s nice to know that Papago will get its own improvements before the Giants move there from their current facility on Camelback and Hayden Roads (Indian School Park). As much as I like the A’s situation at Hohokam, like the rest of Mesa it’s pretty sleepy.

Occasionally I would hear talk of the Giants building their own ballpark/training center complex near the Scottsdale/Tempe border, where there remains some undeveloped land. Instead the Giants struck a deal with Scottsdale to get some improvements at Scottsdale Stadium. The main thrust of the work is an expanded clubhouse that will also serve as an event center/club facility, the better to attract Giant fans with fat wallets and expense accounts. The event center is claimed to be the largest such space in the downtown area, which is somewhat surprising given the bevy of hospitality options in the city. While the stadium will remain in Scottsdale’s Old Town, the training facility at Papago Park will be just outside Scottsdale within Phoenix city limits. Moving to Papago required a separate negotiation. Indian School is 1.5 miles away from the stadium. Papago is a whopping 2.5 miles away. It’s not quite the convenience of having a single campus like the Cubs or Dbacks/Rockies at Salt River Fields, but it’s an easy drive or bike ride between the two and most Giants fans will prefer to be around the Old Town scene during and after the games. 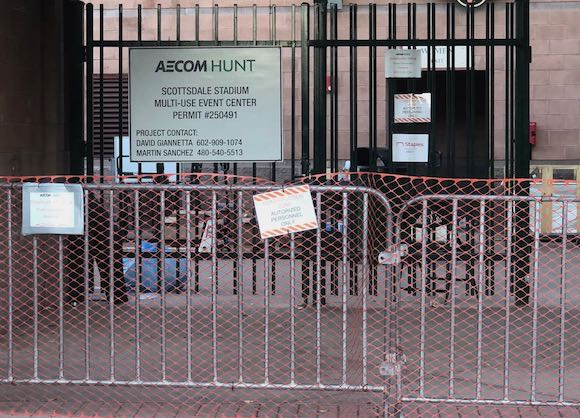 The East Valley (defined loosely as the communities within the Loop 202 freeway plus Scottsdale) is the economic engine of the area. Teams that call the East Valley home are in enviable positions relative to their Cactus and Grapefruit League counterparts. After the trend of huge campuses that helped save and expand the Cactus League a decade ago, it’s refreshing to see a return to renovated facilities, even if they’re split. The A’s and Giants are unlikely to go anywhere for years if not decades. The Brewers also renewed their deal in Maryvale. All teams are consolidating player development at their facilities, further establishing permanence while also endangering some minor league cities.

There’s even more baseball this spring. A college tournament is set for Salt River Fields in two weeks, plus Olympic qualifiers are slated for late March. We’re eleven days from pitchers and catchers reporting. I might be able to take more advantage of the Spring Training Ballpark Pass this year. I’m already seeing a lot of people around here in shorts. Spring always comes early to the Valley of the Sun. ASU hosts numerous wintering teams this month, an early spring ritual. It’s an embarrassment of riches.