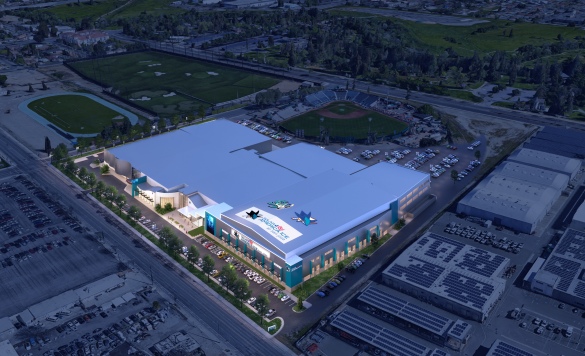 Expanded training facility with planned garage (not depicted) across the street

When the Worcester Sharks moved to San Jose to share an arena and a practice facility with their parent club, I was curious to see how long that would last. The answer apparently is six years, as last week the rebranded San Jose Barracuda announced plans to construct a new, 4,200-seat arena adjacent to the Solar4America training facility they continue to share with the Sharks. From the press release:

While I’m glad for the players and the Sharks farmhands that they’ll get better facilities, I feel an opportunity to grow the sport is being lost in the process. The Sharks are effectively doubling down on the South Bay, instead of using an opportunity to grow the sport. To the Sharks’ credit, they also operate ice rinks in Oakland and Fremont, so they are providing some exposure to the sport. When it comes to playing pro ice hockey, fans will still have to come down to San Jose or all the way out to Stockton for the privilege, which is disappointing. As longtime readers of this blog are well aware, I am more than anything else an advocate of spreading the “wealth” of pro sports all over the Bay Area and Northern California. It provides exposure to all communities instead of concentrating teams in San Francisco or San Jose, where ironically, the actual wealth is. This consolidation trend works against my desire and to me seems short-sighted. 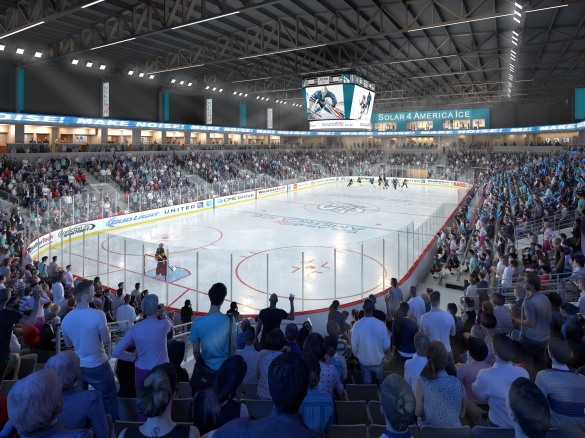 I suspect that Oakland was out of the question, because the Oakland Ice Center can’t be easily expanded and the Sharks don’t operate the Oakland Arena, which is newly empty with a part-time tenant in the Panthers arena football team (who kick off in March). The ‘Cuda play a 68-game schedule, which means the arena would have to maintain an ice surface on-and-off for a full seven months annually. Hockey teams remain sensitive to ice surface quality, which is tough to maintain in balmy California. A leading argument for having both the Sharks and Barracuda play at SAP Center was to give a reason to maintain the ice at the big arena. Instead, the Sharks are pulling back at SAP, opening dates for concerts and other events while consolidating work at an expanded Solar4America Ice facility.

I have a few friends who are season ticket holders to the Barracuda, so I’m interested to see how willing they’ll be to move southeast with the team. It’s only 3+ miles, but anyone who goes to SJ Giants or SJSU Spartans football games nearby know that public transit isn’t a great option to the South Campus area. Parking should be easier as a garage rises across the street from the facility to replace the spaces lost with the expansion. Another loss is a city-owned firing range at the edge of the property, though I don’t know enough about that to gauge its impact. SJSU’s hockey club is probably licking their chops, since they already play at Solar4America Ice and would enjoy the benefits a new arena provides to a college program. First, the Sharks might want to beef up their electrical capacity.

STANDBY—Solar4America Ice at San Jose is experiencing a power surge that is effecting electricity. PG&E is working on it. We are delayed at the moment. We will update as soon as we have more info.

With the Sharks’ minor league affiliate getting its own arena and SJSU blowing out the east side of CEFCU/Spartan Stadium to expand it, it’s a boom period in what is historically a sleepy industrial part of town. Along with what the Giants are doing in Scottsdale and Phoenix, I guess people have money to burn.

10 thoughts on “Barracuda to get their own Tank”