Saturday morning is not normally I time to check sites for updates. However, it was August 1, so there was a small chance of seeing something new. If you checked the A’s We Are Rooted site for Howard Terminal over the past several months, you were greeted with this graphic: 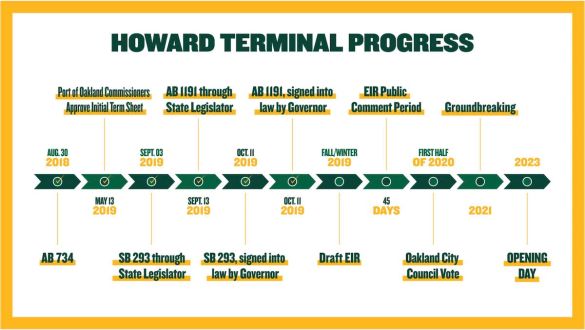 By June, it was becoming embarrassingly obvious that this graphic would need to be updated. So I sent out a tweet asking Dave Kaval for it. Ask and ye shall receive, as they say: 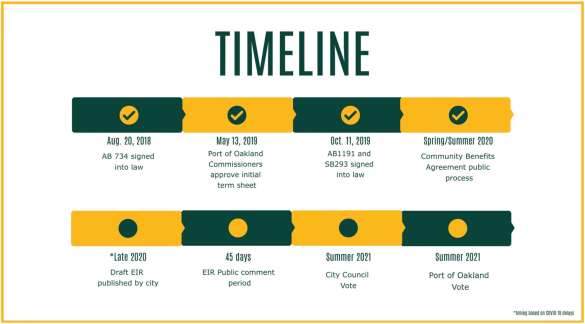 The differences? First of all, there’s no groundbreaking date in 2021 or 2023 Opening Day. In fact, neither is promised at all. What we’re left with are dual Oakland City Council and Port of Oakland votes a year from now, which at this point looks and sounds like a rapidly deflating balloon.

Second, the Draft EIR period is being undersold, as usual. That’s the period when opponents normally launch lawsuits against projects. The problem now is two-fold. While the A’s spent a lot of time and lobbying money trying to line up bills to streamline Howard Terminal through the CEQA process, the project is currently stuck in legal limbo while the state tries to figure out if the A’s successfully applied by the end-of-2019 deadline. It’s bad enough that there’s a protracted battle over the streamlining issue, where the A’s consultants keep submitting addenda to support the project while opponents file letters claiming that the project isn’t eligible.

Excerpt from Port companies letter against project (highlight mine)

Here’s the thing. I didn’t even want to write this post. When the sh*t hit the fan in March, I felt it would be best to let the dust settle and resume coverage when the EIR is released. Reasonable plan, right? Well, you know what they say about best-laid plans. Kaval says the EIR should be published by September. Which sounds okay, except that’s already a year delay from what was promised previously. At this point, we don’t really know when the document will be released. If past is prologue, I have to put the likelihood that we’ll see the draft version at 50/50.

Sadly, that’s all too typical of A’s ballpark projects since I started this blog 15 years ago. The EIR process, which for most people sounds like a tediously boring bureaucratic step, became a crucial gating mechanism for the viability of big projects. Last week, I tried to recall all of the sites beyond the Coliseum that the A’s have studied so far.

It doesn’t end with the draft, though. Publishing the draft kicks off the review and comment process, which opponents are already throwing a wrench into with their pre-emptive lawsuit. The 45-day comment period is a minimum guideline and tends to get drawn out as comments pile up and staff has to write responses or even make major or wholesale changes to the project.

This is why I cautioned so many readers and A’s fans against jumping on the HT bandwagon too eagerly. It, like most of the other past initiatives, is rife with conflict and litigious opponents. For now, I’ll continue to stay the course, hoping that the draft EIR is released and we’ll have something cool to talk about. Perhaps I’m asking too much. I’ll end with my favorite John Wooden quote:

P.S. – When I first referred to the changed timelines yesterday, I got the usual blowback from HT fans who for some reason cannot comprehend why I’m not on the bandwagon. If those people can’t understand why from reading the post above, I can’t help them. Sorry, folks. Hope is not a strategy.

17 thoughts on “Pushback causes Howard Terminal to get pushed back”