Word came yesterday that the US Olympic Committee was going to select its choice as the bid city for the 2024 Olympics. A month ago, I considered the bid doomed because of its wasteful temporary stadium in Brisbane. Now it looks as if wiser minds have prevailed, as San Francisco Mayor Ed Lee and Oakland Mayor Libby Schaaf held a conference call today to promote a new wrinkle in the plan: a main stadium for track and field and the opening/closing ceremonies at the Coliseum complex. Phil Matier has the scoop. Though bid presentations were made in mid-December, there was nothing stopping BASOC from amending the proposal to include the new stadium concept.

That concept is eerily similar to what I suggested a month ago. The stadium would be outfitted for the Olympics, but built for the Raiders in the long run. The idea of a “legacy” stadium could significantly boost the Bay Area’s bid, which was hampered by the $350 million, pop-up stadium on the windy stretch of Peninsula south of the ‘Stick. While pop-up stadia are a great idea in principle, in actual practice they haven’t proven to be as versatile or reusable as originally thought, especially in the case of London’s Olympic Stadium. Maybe another decade will bring technology that can make such a concept more efficient, but I wouldn’t pin a bid’s hopes on it. That’s why a stadium that works for both the Olympics and the Raiders makes sense. Atlanta’s Olympic Stadium was transformed into Turner Field, which was perfectly fine for 20 years until the Braves decided they wanted to chase suburban dollars in Cobb County. That shouldn’t be an issue with the Raiders in Oakland.

The rest of the bid appears to be designed to look as compact as possible given the dearth of major outdoor facilities within SF city limits. It has AT&T Park repurposed for beach volleyball, the W’s SF arena used for gymnastics and basketball (finals, presumably), Aquatic Park for staging many long distance events, and Harding Park for golf. Some of the more debatable choices include Treasure Island for a series of new facilities (BMX, tennis, sailing). While Treasure Island offers a great backdrop for a BMX track, so does the Embarcadero. Stanford’s Taube Family Tennis Center is arguably the best in Northern California and would only need a temporary stadium expansion to be compliant.

Sites in the East and South Bay are not numerous, especially when compared to the 2012 and 2016 bids. Stanford is only listed for the pentathlon, an outdoor event not dependent on a large stadium. SAP Center is the volleyball venue, while Haas Pavilion is a key basketball venue and Oracle Arena is listed for handball (I think these should be reversed). The Coliseum complex was originally going to have the arena and a new velodrome. Having a velodrome, stadium, and arena there creates a nice hub of activity. 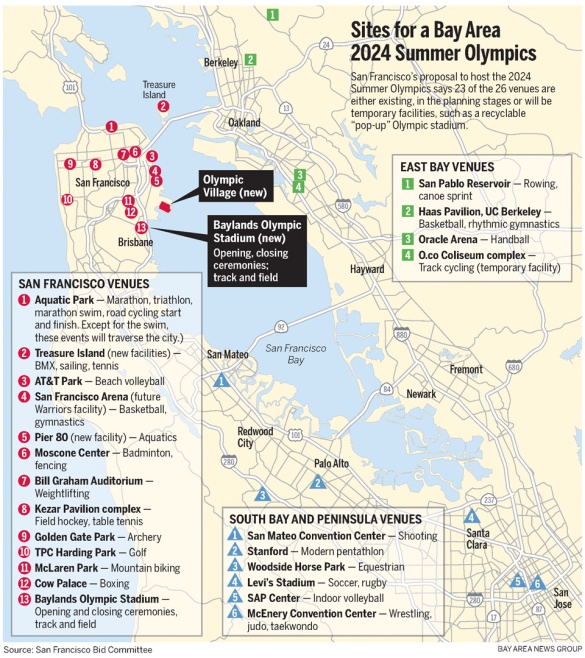 Mercury News map shows locations of venues, does not include new Oakland stadium at Coliseum

A hub-based plan is what Los Angeles is going for. Leaning on its previous Olympic experience, LA could be considered the favorite if the chief criteria is efficiency. The compactness of the bid belies LA’s reputation for sprawl, with most of the venues within 10-15 miles of each other. To achieve that compactness even Orange County has been cut out of the bid. Somehow the LA River will be a “feature” of the bid, which could give rise to the least photogenic Olympics ever (Beijing’s smoggy skies providing stiff competition).

Hubs were a feature of Bay Area’s previous bids, but with Stanford 30 miles away from downtown SF, the Bay Area’s hubs were going to be too far flung. Eventually, if the Bay Area bid beats out the others, BASOC and USOC will have to consider better utilizing Stanford and Cal to contain costs. In Matier’s report he suggests that the two West Coast cities lead the pack. Boston has many geographical advantages and is the most compact city, but it lacks many major venues and may be considered too small to make it work. Washington’s bid depends its own Olympic-NFL stadium, replacing RFK Stadium and allowing their NFL team to come back from the Maryland suburbs. Washington has the worst weather, and is dragged down by its perception abroad. SF may be the golden child in terms of image, and is certainly the prettiest locale of the four.

Later today the USOC will meet in a conference room inside Denver International Airport’s terminal. After the decision is made the committee will announce the decision and fly out to the winning city for a press conference. The list of cities on the 2024 Summer Olympics Wikipedia page is not all that impressive despite the name recognition, so 2024 is as good a chance for the US to win as any in the last decade or so. The final selection by the IOC will take place in 2017, so the winner tomorrow will have a lot of time to work with the USOC on fine-tuning its submission.

P.S. – If SF is chosen, and the Raiders sign on to a NFL-Olympics stadium at the Coliseum, chances are that the A’s would be gone. It’d be difficult to have a new stadium, the existing arena, a cycling velodrome, and a new ballpark at the Complex. It’s simply too crowded. Making the parking situation work while supporting several years of construction over multiple phases is a bit much to ask of “permanent” tenants like the pro sports teams.

P.P.S. – There are a number of political and infrastructural issues to tackle should SF get the nod. I’m hesitant to write anything about that stuff until a bid is chosen.